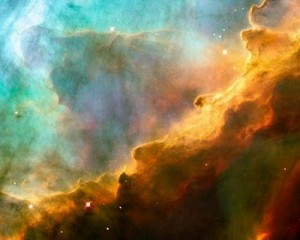 In the first third of the 20th century, astronomers noticed the expansion of the universe, the thing that had previously aroused a lot of controversy before scientists could admit it. The Glorious Qur’an referred to this fact more than 1,400 years ago:

[We [Allah] have built the heaven with (Our) Hands and surely We are indeed extending (it) wide.] (Adh-Dhariyat 51:47)

This verse was revealed at a time the whole world believed that the universe is stable and unchanging. This thought prevailed until the mid-20th century when astronomers discovered that the universe is expanding and its galaxies are getting distant from us and from each other at almost the speed of light (300,000 km/s). Besides, all the mathematical equations and the laws of physics support what astronomers found. Hence, astronomers, theoretical physicists, and astrophysicists assume that if we went back in time, we would find that all the visible and invisible forms of matter and energy in the cosmos must have been compressed in an elementary minute body whose size is almost zero, and where the dimensions of time and place contract.

This elementary body was in a state of density and heat that the human mind can hardly imagine and where there is no place for the laws of physics. This elementary body exploded, by Allah’s command, in what is called in the Qur’an Al-Fatq, which refers to the phase when the earth and heavens exploded after being a one solid mass, and by scientists as the Big Bang. Thus, the Qur’an is the first to mention this great cosmic event exceeding any human knowledge; Almighty Allah says:

[And have not the ones who disbelieved seen that the heavens and the earth were an integrated (mass), then We unseamed them, and of water We have made every living thing? Would they then not believe?] (Al-Anbiyaa’ 21:30)

When an elementary body with these characteristics explodes, it turns into a cloud of smoke from which the earth and all the celestial bodies were created. Again, the Qur’an exceeds all the human knowledge when it mentions the phase of “smoke” before 1,400 years, as follows:

[Say (O Muhammad), “Is it true that, indeed, you surely disbelieve in (The One) Who created the earth in two days, and do you set up compeers to Him?” That is The Lord of the worlds. And He made therein anchorages (i.e. mountains) from above it, and He blessed it and determined therein its nourishments in four days, equal (i.e. all these four days were equal in the length of time) to the questioners (about its creation). Thereafter, He leveled Himself to the heaven (while) it was smoke, then said to it and to the earth, “Come up (you two) willingly or unwillingly!” They (both) said, “We come up willingly.” So He decreed them as seven heavens in two days, and He revealed in every heaven its Command. And We have adorned the lowest heaven with lamps, and (set Angels) preserving them. That is the determining of the Ever-Mighty, the Ever-Knowing.] (Fussilat 41:9-12)

On the 8th of November, 1989, NASA launched its Cosmic Background Explorer (COBE) satellite in an orbit that is 600 km away from Earth and the effect of clouds and pollutants in the lower layers of the Earth’s atmosphere. Ten light years away from Earth, COBE sent millions of photos and information about the remnants of the smoke that resulted from the Big Bang. It was a phase of a dark smoke that had prevailed in the universe before the heavens and the Earth were created.

[Thereafter, He leveled Himself to the heaven (while) it was smoke, then said to it and to the Earth, “Come up (you two) willingly or unwillingly!” They (both) said, “We come up willingly.”]

Although we believe that these events are far from being known to us, as Almighty Allah says: 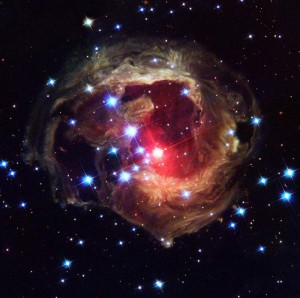 Yet, the constancy and continuity of the cosmic laws help us somehow to create a right image about these unknown events in spite of the limitedness of human senses and mental abilities on one hand and the limitedness of our time and space, on the other.

Besides, things such as long-range missiles, their satellites, and the sensitive recording and measuring devices helped a lot in forming an image of the cosmic dust (smoke) resulting from the Big Bang, whose remnants were found at the far end of the visible universe (up to 10 billion light years away). This served as evidence that the Qur’anic description “smoke” has not been chosen haphazardly and that it accurately describes the state of the universe before the creation of Earth and heavens.

Astrophysics and the Cosmic Smoke

After the Big Bang, the whole universe turned into a cloud of smoke from which the Earth and heavens were later created. Physical calculations tell us that the size of the universe before the Big Bang was almost zero, as both matter and energy were greatly compressed and the dimensions of time and place had no existence. After the explosion of this elementary body (the Big Bang), it turned into a ball of radiation and elementary particles that continued to expand and cool at a great speed until it turned into a cloud of smoke.

These physical calculations suggested that the heat of the universe during the first few seconds after the Big Bang was ranging from trillion Kelvin degrees up to billions of Kelvin degrees. This cloud of smoke consisted of photon, electron, and neutron particles and their antiparticles.

If the universe did not continue to cool and expand steadily and accurately, the elementary particles of the matter would have annihilated one another and the universe would have vanished. But, Allah, Who perfectly created everything, has maintained it.

Excerpted with slight modifications from the original article The Cosmic “Smoke”.