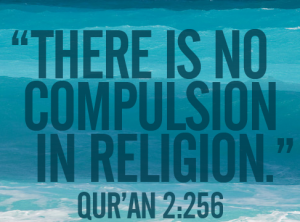 Anyone who surveys Islam’s history, mission and the way it spread, will find that Islam spread in the territories it opened only after some time had passed.

Some people claim that Islam only spread at the point of swords. The only answer capable of refuting such a false claim is that a sword can conquer and open territories but certainly cannot conquer the human heart. As opening hearts and unlocking their seals require some other instrument. It needs persuasion of the mind, attraction of emotions, and impressing the psychological element in man.

More likely, if the sword is placed on a man’s neck, this will prevent him, in one way or another from accepting or responding positively to the call or faith of the one who hold the sword. This is because it is man’s nature to turn away from those who oppress and humiliate him.

Anyone who surveys Islam’s history, mission and the way it spread, will find that Islam spread in the territories it opened only after some time had passed. This took place only when the obstacles that were laid between the people and the Islamic call were removed and they were given the proper chance to listen to the Muslims and the teachings of Islam in a peaceful, quiet and tolerant environment far away from the rattling of swords and flying of lances. They also saw the morals and ethics of the Muslims in terms of their relation with their Lord (Allah, the Almighty), with themselves, and others. Thus, they came to respect and love the Muslims and drew nearer to their religion that educated these virtues and noble traits.

In Egypt, for example, the people kept their religion (i.e. Christianity) for decades during which they embraced Islam only one by one. Even the Coptic young man whom `Umar established his right and retaliated from the son of the ruler, `Amr Ibn Al-`Aas for his sake, did not embrace Islam in spite of the wonderful and dazzling justice and fairness he had personally witnessed.

Here we quote Thomas Arnold in his book The Preaching of Islam,

“We have never heard about any attempt to compel Non-Muslim parties to adopt Islam or about any organized persecution aiming at exterminating Christianity. If the Caliphs had chosen one of these plans, they would have wiped out Christianity as easily as what happened to Islam during the reign of Ferdinand and Isabella in Spain; by the same method which Louis XIV followed to make Protestantism a creed whose followers were to be sentenced to death; or with the same ease of keeping the Jews away from Britain for a period of three hundred and fifty years.”[1]

Another non-Muslim commented on Islam and how it spread under the title: Islam: The Religion of Non-Compulsion, [2] saying:

“History makes it clear, however, that the legend of fanatical Muslims sweeping through the world and forcing Islam at the point of the sword upon conquered races is one of the most fanatically absurd myths that historians have ever repeated.”[3]

[1] Sir Thomas W. Arnold, The Preaching of Islam, A History of the Propagation of the Muslim Faith, Westminster A. Constable & Co. London, 1896.