Allah’s Beautiful Name, Al-Ghaffar, comes in the Qur’an under three forms, first of which is “Ghafir”. Allah, All-Mighty, says: 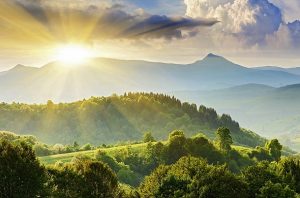 Man’s sins and wrong-doings are by no means infinite, but Allah’s Divine Forgiveness is really Infinite.

Ghafir-i-dhamb (the Forgiver of sin), the Acceptor of repentance, the Severe in punishment, the One Who Bestows (Favors). There is no god but He, to Him is the Final Return. (Ghafir 40:3)

The second form is “Al-Ghafour”, as in Allah’s words:

And your Lord is Al-Ghafour (the Oft-Forgiving), the Owner of Mercy. Were He to call them to account for what they have earned, then surely, He would have hastened punishment for them; but they have their appointed time, from which they will find no escape. (Al-Kahf 18:58)

Declare (O Muhammad) unto My slaves that truly, I am Al-Ghafour (the Oft-Forgiving), the Most Merciful. (Al-Hijr 15:49)

Say to My salves who have transgressed against themselves: ‘Do not despair of Allah’s Mercy. Verily, Allah forgives all sins. Truly, He is Al-Ghafour (the Oft-Forgiving), the Most Merciful. (Az-Zumar 39:53)

The third form of this Divine Name is “Al-Ghaffar” as in Allah’s words:

And verily, I am Al-Ghaffar (the All-Forgiving) for him who repents, believes and does righteousness and is moreover rightly guided. (Ta-Ha 20:82)

I said: ‘Ask forgiveness of your Lord, (for) verily, He is Ghaffar (All-Forgiving). He will send rain to you in abundance, and give you increase in wealth and children, and bestow on you gardens and bestow on you rivers. (Nuh 71:10-12)

In short, “Ghafir”, “Ghafour” and “Ghaffar” are all used to the same purport in the Qur’an, for they are derived from the same root, “Al-Maghfirah” (i.e. Forgiveness).

Some scholars said: “A person who disobeys Allah, All-Mighty, is described in the Qur’an as being “dhalim”, “dhaloum” or “dhallam”. For example, Allah says:

Another example is Allah’s words:

Truly, We did offer the Trust to the heavens and the earth and the mountains, but they declined to bear it and were afraid of it. But man bore it; verily he was “dhalouman” (i.e. unjust to himself) and ignorant. (Al-Ahzab 33:72)

A third example is:

Say to My slaves who “asrafou” (have transgressed) against themselves: ‘Do not despair of Allah’s Mercy. Verily, Allah forgives all sins. Truly, He is All-Forgiving, Most Merciful. (Az-Zumar 39:53)

Thus, the way man commits sins or does wrong to himself determines the way in which Allah responds and forgives such sins or wrong-doings.

If your sin is finite but Allah’s Divine Forgiveness is Infinite, then it is most unwise, most ignorant, and most ungrateful to despair of Allah’s Infinite Divine Mercy. Therefore, a desperate person is an ignorant ungrateful disbeliever.

Another delicate point with regards to this Divine Name “Al-Ghaffar” is that the verses in which this Name is mentioned include verbs in the past form, as in Allah’s Words:

He (David) said: ‘He has wronged you in demanding your ewe in addition to his ewes; and verily, many partners oppress one another, except those who believe and do righteous good deeds – and such are few.’ And David guessed that We have tried him and he sought Forgiveness of his Lord, and he fell down prostrate and turned (to Allah) in repentance. So, We forgave him that, and verily, for him is a near access to Us and a good place of (final) return (Paradise). (Sad 38:24,25)

They also include verbs in the present form, as in Allah’s words:

Verily, Allah forgives not that partners should be set up with Him, but He forgives other than that to whom He wills. And whoever sets up partners with Allah has indeed invented a tremendous sin. (An-Nisaa’ 4:48)

They also come in the imperative form:

Our Lord! Verily, we have heard the call of one (Muhammad) calling to Faith: ‘Believe in your Lord!’, and we have believed. Our Lord! Forgive us our sins and expiate from us our evil deeds, and make us die as pious and righteous. (Aal `Imran 3:193)

They also come as verbs in the root form:

The Messenger (Muhammad) believes in what has been sent down to him from his Lord, and so do believers: each one believes in Allah, His Angels, His Books, and His Messengers, saying, ‘We hear, and we obey. (We seek) “Ghufranaka” (i.e. Your Forgiveness), our Lord! And to You is the Final Return.’ (AL-Baqarah 2:185)

This means that Allah, Most Gracious, forgives you your previous, present and future sins, for He is the Oft-Forgiving. Whenever you commit sins, He is Oft-Forgiving. He, Most Gracious, also forgives all kinds of sins. In other words, for any sin or misdeed, He is the All-Forgiving. If you wrong yourself or other, He forgives you, but of course, after you have turned to Him with true repentance and sincere devotion. He, Most Merciful, forgives all kinds of sins everywhere and at all times, for He, Glory to Him, is the Oft-and-All-Forgiving, the Most Merciful.

Now the question is: why does this Divine Name come in such different forms? This is a very reasonable question.

The answer is: Linguistically speaking, such variation of word-forms of Allah’s Beautiful Name “Al-Ghaffar” denotes differences in both quantity, quality and frequency of occurrence, for Allah is Ghaffar in the sense that He is both Oft-Forgiving and All-Forgiving. In other words, whatever sins mankind commit, regardless of quality or quantity of such sins, or time or place of their occurrence, Allah forgives such sins, except for one unforgivable sin, namely associating other gods with Him in worship, which is by no means forgivable, as He, All-Mighty, says:

Verily, Allah forgives not that partners should be set up with Him, but He forgives other (sins) than that to whom He wills. And whoever sets up partners with Allah has indeed invented a tremendous (unforgivable) sin. ((An-Nisaa’ 4:48)

In this context, Allah says

Whosoever does deeds of righteousness, it is for (the benefit of) his own self; and whosoever does evil, it is against his own self. And your Lord is by no means unjust to His slaves. (Fussilat 41:46)

In other words, Allah, Most Gracious, Most Merciful, never does injustice to any of His slaves, all of whom enjoy being under His Infinite Divine Justice.

Another thing: Linguistically speaking, the Arabic word “Ghafara” means “to cover or hide”, but when Allah speaks about Moses (peace be upon him):

…and also about His Messenger, Muhammad, (peace be upon him):

That Allah may forgive you your sins of the past and the future, and complete His Favor on you, and guide you on the Straight Path. (Al-Fath 48:2)

He, Glory to Him, means that He pardons and forgives, i.e. He, Most Gracious, does not punish His Prophets and Messengers but rather forgives them.

The problem is that when we read one part of the Qur’an, we forget another. For example, when we read Allah’s words:

Say to My salves who have transgressed against themselves: ‘Do not despair of Allah’s Mercy. Verily, Allah forgives all sins. Truly, He is the All-Forgiving, the Most Merciful.’ (Az-Zumar 39:53)

Here, we should not stop but rather continue reading:

And turn you in repentance and in obedience with true Faith to your Lord and submit yourselves to Him before the Torment comes upon you, and then you will not be helped. (Az-Zumar 39:54)

Declare (O Muhammad) unto My slaves that, truly, I am the Oft-Forgiving, the Most Merciful, and that My Torment is indeed the most painful torment. (Al-Hijr 15 :49,50)

Dr. Al-Nabulsi is an outstanding Syrian Islamic scholar. He has written a number of Islamic books, most remarkable of which are: “Encyclopedia of the Beautiful Names of Allah”, “Encyclopedia of Scientific Miracles of the Holy Quran and Prophetic Sunna”, “Outlooks on Islam”, besides articles for some Syrian, Arab, Islamic, and Western magazines and newspapers. He also delivers a number of lessons, symposiums and interviews on Arab, Islamic radios and TVs.