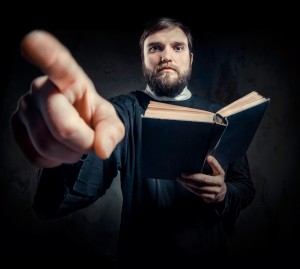 The Jews of two thousand years ago were definitely looking for the Messiah, who was foretold in their books.

The Comforter, the Spirit of Truth, whom the Father will send in my name, he shall teach you all things, and bring to your remembrance all that I said unto you.” [John 14:26] Almighty Allah says in the Qur’an:

The chief priests and Levites asked John the Baptist, “If you are not the Christ (Messiah), and not Elijah – are you that Prophet?” [JohnY 1:20]

When the chief priests and Levites asked John the Baptist who he was, they asked him in a very strange way. First, they questioned him as to whether or not he was the anticipated “Messiah” [Christ in Koine Greek]. He was not the “Messiah” that had hoped for. Next they asked if he was the prophet Elijah and again he tells them, “No.” Now comes the really strange part. Finally, they asked him if he is “That Prophet?”

What did they mean by “That Prophet?” We of course, know who the “Christ” is. After all, Christians should know that “Christ” is merely a shortened form of the Koine Greek word “christos,” intended to mean the Hebrew word “Messiah.”

The Jews of two thousand years ago were definitely looking for the Messiah, who it was foretold in their books, would come and lead them to victory over their oppressors and thus gain for them mastery over this world. They were very oppressed under Roman domination and even their own Jewish kings were seen as nothing more than puppets or agents for the disbelievers. Certainly, they would have been most happy to see someone come on the scene who would defeat their Roman masters and slave drivers.

Then, the priests and Levites asked John the Baptist if he might be the prophet Elijah, returning back after hundreds of years being away. There was the notion amongst them that Elijah would come back. But again, John the Baptist is denying he is Elijah.

Then, who is he? They wonder at this man living out in the desert and forsaking wealth and luxury and fasting, avoiding the material attractions of life.

Again, they ask John the Baptist who he is. “Are you that Prophet?” And one more time he denies being “that Prophet,” but then he does tell them about someone who will come after him soon, whom he claims he is not worthy to even unlace his shoes.

However, this does not answer the question, “Who were they expecting besides the Messiah?” Could it be they were looking for someone like Muhammad? Could be?

Who is that Prophet?

Keep reading and learn who “that Prophet” is and what other proofs can be discovered within the Holy texts to support this idea.

For centuries Muslims have believed Jesus (peace be upon him) was “thatProphet” mentioned in these words of the Gospel of John. The Qur’an states one of the important features of Jesus’ mission; that was to give the “bashir” or ‘glad tidings’ of the coming of the Prophet Muhammad (peace be upon him). During his short missionary career that lasted not more than three years, and which was overshadowed by the hostile attitude of his own people, Jesus gave them the good news of Ahmad, (one of the forms of “Muhammad”) the last messenger of God, who would perfect the divine teaching both in theory and in practice. The Qur’an mentions that Jesus says:

“O children of Israel, indeed I am the messenger of Allah to you confirming what came before me of the Torah and bringing good tidings of a messenger to come after me, whose name is Ahmad.” (As-Saff 61:6)

The Qur’an gives the name as Ahmad, one of several ways to say Muhammad’s name. Just as we have in English the name Joseph, and often use a shorter form such as “Joe” or the familiar form, “Joey,” and other names like “Jonathan” which becomes “John”; “Jack” or “Johnny”, so in the same way we find Arabic has similar forms for a name. Muhammad, Ahmad and Hamad are a few of the names originating from the root word, “hamd” (meaning ‘praise) in Arabic, and can be understood as “The one who praises (God)”; “the praised one”; “praising”; etc.

Abdullah Yusuf Ali in his translation of the meanings of the Qur’an to English, he states, “Ahmad or Muhammad, “the Praised One” is a translation of the Koine Greek word Periclytos. In the present Gospel of John 14:16, 15:26 and 16:7, the Greek word Paracletos is translated in the NIV as Comforter. Paracletos can mean an Advocate, or “one called to the help of another”, “a kind friend.” Muhammad (peace be upon him) was known from birth as one who brought comfort and reconciliation to family, friends and strangers alike, especially in bringing together the ties of kinship and brotherly love.

The New Testament Gospel according to John, Jesus (peace be upon him) promises them the Paracletos will come four times (John 14:16; 14:26; 15:26; 16:7). Naturally, Jesus (peace be upon him) did not return in their lifetime nor did any other Prophet for that matter, so later thinkers came up with the notion that it was not Jesus “in person” but rather, Jesus coming back in “spirit form.” This led some Christians to assert, this was to be the Holy Spirit, who would descend upon the disciples on the Day of the Pentecost (Acts 2), to witness Christ and lead them into the whole truth and to be with the believers forever, and they would not die (John 3:16), but have everlasting life. Also, some added verses later (see footnotes to Revised Standard Version of the Bible) to the very last chapter of Mark (16), wherein, they have the Spirit coming upon them in such a way they imagined themselves going to be able to speak with new languages; pick up snakes, lay hands on the sick to cure them and even drink poison and nothing would hurt them. [Luke 23:17-18]

Another point is, the Paracletos, comforter or the Spirit of truth, was going to dwell with us from now on. Certainly, anyone could see Muhammad’s influence and his message of worshipping only One God without any partners has prevailed long after his earthly life.