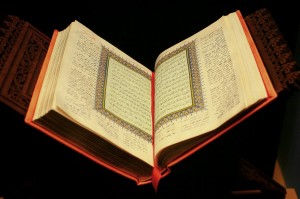 The Qur’an is the word of the Lord of the Worlds, which Allah revealed to His Messenger Muhammad.

The Qur’an is the word of the Lord of the Worlds, which Allah revealed to His Messenger Muhammad (peace be upon him), to bring mankind forth from darkness into light:

It is He Who sends down manifest verses to His slave (Muhammad) that He may bring you out from darkness into light… (Al-Hadid 57:9)

In the Qur’an, Allah has told us the stories of the earlier and later generations and the creation of the heavens and the earth. He has explained in detail what is halal and what is haram, the basics of good manners and morals, the rulings of worship and treatment of others, the lives of the Prophets and the righteous, and the reward and punishment of the believers and disbelievers. He has described Paradise, the abode of the believers, and He has described Hell, the abode of the disbelievers. He has made it (the Qur’an) an explanation of all of that,

And We have sent down to you the Book (the Qur’an) as an exposition of everything, a guidance, a mercy, and glad tidings for Muslims. (An-Nahl 16:89)

The Qur’an explains the names and attributes of Allah and what He has created. It calls us to believe in Allah, His angels, His Books, His Messengers and the Last Day:

The Messenger (Muhammad) believes in what has been sent down to him from his Lord, and (so do) the believers. Each one believes in Allah, His Angels, His Books, and His Messengers. (They say,) ‘We make no distinction between one another of His Messengers’ — and they say, ‘We hear, and we obey. (We seek) Your forgiveness, our Lord, and to You is the return (of all)’ (Al-Baqarah 2:285)

The Qur’an describes the Day of Judgment and what will happen after death – the resurrection, the gathering, the judgment and being brought to account. It describes the Cistern, the Sirat (bridge over Hell), the Balance [in which deeds will be weighed], the blessings and torment, and the gathering of mankind on that great Day,

Allah – there is no deity except Him. He will surely assemble you for [account on] the Day of Resurrection, about which there is no doubt. And who is more truthful than Allah in statement. (An-Nisa’ 4:87)

The Qur’an calls us to examine and ponder on the signs of Allah in the universe and the verses of the Qur’an:

Say, “Observe what is in the heavens and earth.” But of no avail will be signs or warners to a people who do not believe. (Yunus 10:101)

Do they not then think deeply in the Qur’an, or are their hearts locked up (from understanding it)? (Muhammad 47:24)

The Qur’an is the Book of Allah for all of mankind, Allah the Almighty says,

Indeed, We sent down to you the Book for the people in truth. So whoever is guided – it is for [the benefit of] his soul; and whoever goes astray only goes astray to its detriment. And you are not a manager over them. (Az-Zumar 39:41)

The Qur’an confirms the Books which came before it, the Tawrat (Torah) and Injil (Gospel), and it is a witness over them, as Allah says:

And We have sent down to you (O Muhammad) the Book (this Qur’an) in truth, confirming the Scripture that came before it and Muhaymin (trustworthy in highness and a witness) over it (old Scriptures). (Al-Ma’idah 5:48)

After the Qur’an was revealed, it became the Book for all of mankind until the Hour begins. Whoever does not believe in it is a kafir (non-Muslim) who will be punished with torment on the Day of Resurrection, as Allah says:

But those who deny Our verses – the punishment will touch them for their defiant disobedience. (Al-An`am 6:49)

Because of the greatness of the Qur’an and the signs, miracles, parables and lessons contained therein, in addition to its eloquence and beautiful style, Allah says:

If We had sent down this Qur’an upon a mountain, you would have seen it humbled and coming apart from fear of Allah . And these examples We present to the people that perhaps they will give thought. (Al-Hashr 59:21)

Allah has challenged mankind and the Jinn to produce something like it, even one chapter or one verse, but they could not do that and will never be able to do that, as Allah says:

Because the Qur’an is the greatest of the heavenly Books, the most complete, the most perfect and the last of them, Allah commanded His Messenger Muhammad (peace be upon him) to convey it to all of mankind, as He says:

O Messenger (Muhammad)! Proclaim (the Message) which has been sent down to you from your Lord. And if you do not, then you have not conveyed His Message. Allah will protect you from mankind. (Al-Ma’idah 5:67)

Because of the importance of this book and the Muslims’ need for it, Allah has guaranteed to preserve it. Allah says: