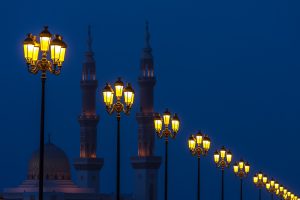 Prayer is the second pillar of Islam.

All praise is due to Allah and may His peace and blessings be upon the Messenger of Allah.

Assembly of Muslims Jurists of America (AMJA) has received many questions regarding the ruling pertaining to holding Friday sermon and prayer services in the mosque with the least number of people needed to fulfill the Jumuah quorum, while broadcasting the services live to the other members of the community for them to listen to the sermon and then follow the imam in prayer, all while in their homes.

This would be to avoid large gatherings in accordance with the recommendations of state governments and health authorities, as well as to prevent the spread of the coronavirus (COVID-19) pandemic.

The answers to these questions are as follows:

It is not permissible according to any valid madhhab for the gap between the rows to be miles long, with tens of buildings and roads as dividers between them. While they agree on overlooking a customarily small gap, they disagree concerning the effect of a wall, road, river, and the like, which would cause separation.

Some of them say that the maximum distance allowed between one row and the next is three hundred cubits (about five hundred feet).

The valid madhhabs do agree that very long distances (as mentioned in the questions) cannot be overlooked, and that this would nullify the Friday prayer. This has been the practice of the Muslims which is the fatwa given by the four followed madhhabs, and is an opinion closer to the practical consensus of the Muslims.

Furthermore, to have individuals or groups praying in homes while following the imam via live broadcast is a matter in contradiction with the objective of the Legislator (Allah), which is to have people gather in one place during Friday services and congregational prayers.

In addition to this, it is possible that the live stream cuts out, or lags such that people see the imam bowing or prostrating later than he actually did.

Another problem of allowing people to follow through broadcasting is that it may lead to people continuing to pray the Friday prayer at home even after this current pandemic passes, which would lead to the loss of reverence for Jumuah, and the above-mentioned objective of the Legislator to have the Muslims gather in once place would not be achieved.

That being said, there is no problem with the imam giving the sermon in the mosque for a small number of people in accordance with what health authorities allow, even if there are only three other congregants, and broadcasting this via the internet (or local TV or the like) for other community members to benefit from hearing it.

However, when it is time to pray, those in their homes would pray the Zhuhr prayer with four rakahs. The Zhuhr prayer could be prayed individually, or in congregation as a family with one of them leading the prayer.

May Allah guide us to beneficial knowledge and righteous actions.

May the peace and blessings of Allah be upon Muhammad, his family, and companions.