Ablution is one of the prerequisites of performing prayer. Although washing both feet to the ankles is compulsory, there is a substitute for this which is wiping over socks.

An important term to define here is Khuff which is mentioned in almost all the hadiths that discuss this matter. Scholars in turn use the term in their books.

Khuff means a covering (often of leather and the like) for the foot that usually reaches above the ankle. Moreover, this article will also discuss the legal rulings for wiping over boots, shoes, socks, sandals and slippers. 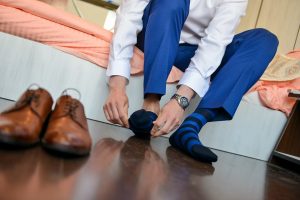 The Legal Ruling on Wiping over Khuffs (Leather Socks)

All Sunni scholars of Islam agree that wiping over Khuffs (leather socks or boots) is permissible. There are many hadiths that support this legal opinion. Hummam reported:

A’mash said: Ibrahim had observed that this hadith was a surprise for them (the people) because Jarir had embraced Islam after the revelation of Surat al-Ma’ida. (Muslim)

In Surat Al-Ma’idah (Surah 5), Verse 6 demonstrates the obligatory acts of ablution. The fact that Jarir (Allah be pleased with him) accepted Islam after the revelation of such verse means the above mentioned legal ruling is effective. If such incident had occurred before the revelation of Surat al-Ma’idah, the ruling would have been abrogated.

In addition, Sunni scholars have reached a consensus that wiping over khuffs is permissible whether the person is on a journey or at the place of residence and whether there is a need to do so or not.

1. You must wear them while you are in a state of purification through ablution or ritual bath.

Then, when you need to perform ablution after wearing khuffs, you do not need to wash your feet again. Narrated `Urwa bin Al-Mughira:

My father said, “Once I was in the company of the Prophet (ﷺ) on a journey and I dashed to take off his Khuffs (socks made from thick fabric or leather). He ordered me to leave them as he had put them after performing ablution. So he passed wet hands over them. (Al-Bukhari and Muslim)

2. The Khuffs must reach above the ankle to cover the feet and the lower part of the leg

According to this condition, you can wipe over boots, leather socks. However, you may not wipe over sandals, slippers and shoes that do not cover the ankle. The hadiths that allow a person to wipe over shoes are not authentic.

As for socks, there are two different opinions concerning the permissibility to wipe over them. On the one hand, Abu Hanifa, Malik and Al-Shafi’i are of the opinion that it is not allowed to wipe over socks. In fact, all the hadiths or reports which denote that Prophet Muhammad (Allah bless him and grant him peace) wiped over socks are not authentic.

On the other hand, it is allowed to wipe over socks according to Imam Ahmad. Here, there are two things used by Imam Ahmad and other scholars who uphold this opinion to support it. The first thing is that a good number of the companions are reported to have wiped over socks. The second thing is the analogy that is there between socks and khuffs. However, according to the majority of the scholars, one may not wipe over light socks.

3. The khuffs must be made from legally pure material

One may not wipe over khuffs or boots that are made from pig’s leather for example.

4. Wiping over khuffs must take place within the legally prescribed period.

The Prophet (ﷺ) fixed the period of wiping over the leather socks for three days and nights for a traveller and one day and a night for the resident person in a town. (Muslim)

How to Wipe over Khuffs?

It is permissible to only pass your wet hands over the apparent or upper part of the khuff. You may not wipe over the bottom part which cover the sole of your feet or the back of your leg.

Things Which Nullify Wiping over Khuffs

Major ritual impurity is a state which requires a person to take a ritual bath. In this case one must take off one’s khuffs. Narrated Safwan bin ‘Assal (Allah be pleased with him):

When we were on a journey, the Prophet (ﷺ) used to command us to wear our Khuffs (leather socks) for three days and three nights, whether we had to answer the call of nature or slept. However, in case of ejaculation or sexual impurity, he commanded us to remove the leather socks. [Reported by An-Nasa’i and At-Tirmidhi, version is of the latter. With them Ibn Khuzaima graded it Sahih (sound)].

2. The expiration of the prescribed period

A person at the place of residence may not wipe over khuffs for more than 24 hours. Likewise, a traveller must take off his or her khuffs after three days and nights. After the expiration of such period, a person can take off khuffs, perform ablution and wash his or her feet before wearing them again.

3. Taking off the khuffs