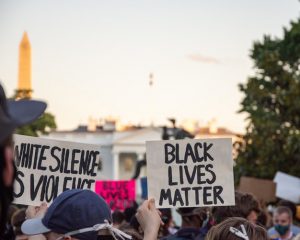 Islam condemns racism in all shades and forms; hence there is no room whatsoever in Islam for such a thing as racial holy war. One of the most fundamental teachings of the Quran is that all of humanity is created of a single soul—a fundamental tenet that is reiterated so often in the Quran.

For instance, we read in the Quran:

{O Mankind, be mindful of your Lord, who created you all from a single soul.} (An-Nisa 4:1)

Furthermore, Allah also reminds us of the one sacred bond of humanity that binds all people:

{O mankind, We have created you all from a single (pair of a) male and female and made you nations and tribes so that you get to know one another; verily, the noblest of you in the sight of God is the one who is most mindful of Him. God is All-Knowing, All-Aware.} (Al-Hujurat 49:13)

The Prophet Muhammad (peace and blessings be upon him) further said, “O mankind, there is no superiority for an Arab over a non-Arab, or for a non-Arab over an Arab, or for a white over a black, or for a black over a white. All of you are descended from Adam and Adam has been created from dust of the ground.” (Ahmad)

Islam came to a world torn by racial, tribal, and ethnic conflicts, and preached the creed of one humanity and one family. This lesson was impressed upon the mind of Malcolm X in the most poignant way when he undertook his pilgrimage to Makkah—an experience that transformed him from a black supremacist to a proponent of a single human brotherhood.

Therefore, let me state unequivocally: There is no place in Islam for such a notion of a racial war.

The very notion of a “holy war” is repugnant to the spirit of Islam, for war is an evil; therefore, while you may draw a distinction between a just and unjust war you can never characterize war as holy; it is therefore an evil tolerated only in exceptional circumstances.

It is like a bitter medicine taken to restore health to the body; or stated differently it is comparable to a surgical operation performed on a body in order to remove a malignant tumor for the purpose of restoring health.

Islam never allows a war of aggression, for aggression in all forms is totally condemned in the Quran:

{Fight in the way of God against those who fight you, but do not initiate aggression for God loves not the aggressors.} (Al-Baqarah 2:190)

War in Islam, therefore, is justified only in self-defense. When someone is attacked, the aggrieved has the right to fight back; likewise, if one is persecuted or denied one’s basic rights, it is considered just to resort to armed struggle if that is the only way to attain the same.

Thus, we read in the Quran:

{Permission has been granted to those against whom war has been waged unjustly to fight back. God has the power to help them—those who have been driven unjustly from their homes only for saying, “Our Lord is God.} (Al-Hajj 22:39)

Sheikh Ahmad Kutty is a senior lecturer and Islamic scholar at the Islamic Institute of Toronto, Ontario, Canada.