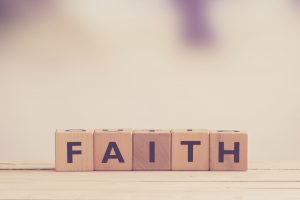 Muslims believe that having faith in God is the only way of salvation. Muslims believe that faith is an act of the heart. Faith means to have a strong belief in the existence, power and knowledge of God. When asked about faith, Prophet Muhammad (peace be upon him) said: “It is to believe in Allah, His angels, His Books, His Messengers and the Last Day and that you believe in pre-ordainment (destiny), its bad and good consequences.” (Muslim)

In addition to act of the heart, faith necessitates the affirmation of our words and supporting it by our good deeds.

Therefore, Muslims believe that it is not enough to have belief in your heart; rather your actions and works should attest to this belief. Some people claim that they have a strong faith but they do not follow this faith by good deeds. This is not acceptable in Islam.

Relation Between Faith and Works

In many Quranic verses, faith is always coupled with good works.

But they who believe and do righteous deeds – those are the companions of Paradise; they will abide therein eternally. (Al-Baqarah 2:82)

Indeed, those who believe and do righteous deeds and establish prayer and give zakah will have their reward with their Lord, and there will be no fear concerning them, nor will they grieve. (Al-Baqarah 2:277)

But as for those who believed and did righteous deeds, He will give them in full their rewards, and Allah does not like the wrongdoers. (Aal Imran 3:57)

But the ones who believe and do righteous deeds – We will admit them to gardens beneath which rivers flow, wherein they will abide forever. [It is] the promise of Allah, [which is] truth, and who is more truthful than Allah in statement. (An-Nisaa 4:122)

And as for those who believed and did righteous deeds, He will give them in full their rewards and grant them extra from His bounty. But as for those who disdained and were arrogant, He will punish them with a painful punishment, and they will not find for themselves besides Allah any protector or helper. (An-Nisaa 4:173)

Allah has promised those who believe and do righteous deeds [that] for them there is forgiveness and great reward. (Al-Maidah 5:9)

But those who believed and did righteous deeds – We charge no soul except [within] its capacity. Those are the companions of Paradise; they will abide therein eternally. (Al-Araf 7:42)

Indeed, those who have believed and done righteous deeds – their Lord will guide them because of their faith. Beneath them rivers will flow in the Gardens of Pleasure. (Yunus 10:9)

It is obvious that there is faith and good deeds are interconnected.

However, Muslims believe that no one will enter Paradise based on his faith. Muslims believe that Paradise is attained by the grace of Allah. Abu Hairah (may Allah be pleased with him) reported that Prophet Muhammad said: “There is none whose deeds alone would entitle him to get into Paradise. It was said to him: And, Allah’s Messenger, not even you? Thereupon he said: Not even I, but that my Lord wraps me in Mercy.” (Muslim)