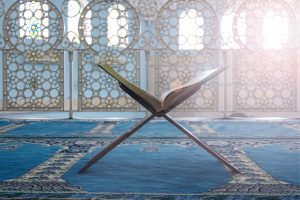 Muslims do not just believe that the Quran is from God based on blind faith. The Quran is a living miracle, one that we can all experience for ourselves.

What is the Qur’an, and how did it come about?

Muslims believe that the Quran was revealed to the Prophet Muhammad, peace be upon him, by God Almighty through the Angel Gabriel.

The Qur’an informs us that Muhammad is the final Messenger in a long line of Messengers that God sent before him, such as Abraham, Moses and Jesus, peace be upon them all.

This is one of the many unique aspects of the Quran: it acknowledges all of the Messengers sent by God.

The Quran’s impact on the world is immeasurable. Although the Quran was revealed in 7th century Arabia, it contains a universal message for the whole of mankind.

Because of the Quran, there are over 1.5 billion Muslims in the world today – nearly a quarter of humanity. They are people of all races, nationalities and back­grounds.

Just to give you a practical demonstration of how many Muslims there are in the world, at any given moment, on any day, someone, somewhere, is reciting the Quran.

It is estimated that there are many millions of Muslims alive today who have memorised the entire Quran.

One has to wonder, what is it about the Quran that has made such an imprint on the hearts of over a billion Muslims?

While the Quran is the most widely read book in the world, it is also arguably the most often misunderstood and misrepresented.

These days it seems that everyone is talking about the Quran. But how many have actually read it? How many have allowed it to speak for itself ?

You may be thinking to yourself, do all religions not make fantastical claims? After all, if these ancient books were originally written in the past, and we were not there at the time to witness the events, then does not belief in them ultimately derive from blind faith?

Muslims do not just believe that the Quran is from God based on blind faith. The Quran is a living miracle, one that we can all experience for ourselves.

Bold claims need to be backed up by strong evidence. As you are going to see, the Qur’an challenges its reader and engages our intellect by providing many testable and verifiable proofs of its divine origin.

This book is going to challenge misconceptions and make some strong assertions. If you are a sceptic of religious books because you think that they are filled with too many fantastical claims and insuf­ficient evidence, then prepare to be surprised. If you have already read the Quran and think that you have seen everything it has to offer, think again!

The article is an excerpt from the author’s book “The Eternal Challenge: A Journey Through The Miraculous Qur’an” with some modifications.