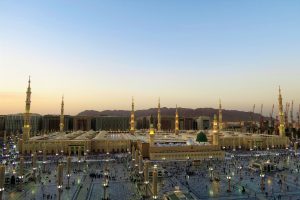 We read in the Quran, which Muslims believe to be the final word of Allah (God), what means:

There has certainly been for you in the Messenger of Allah an excellent pattern for anyone whose hope is in Allah and the Last Day and [who] remembers Allah often. (Al-Ahzab 33:21)

The Quran praises Prophet Muhammad’s manners. We read in the Quran what means: “And indeed, you are of a great moral character.” (Al-Qalam 84:4)

When asked about Prophet Muhammad’s manners, Lady Aishah (may Allah be pleased with her) said: “His character was the Quran.”

This means that the Quran itself is all about good manners. The Quran has references to a set of morals that aim at building a stable society.

Let’s explore Prophet Muhammad’s manners as reflected in the Quran.

It is He who has sent among the unlettered a Messenger from themselves reciting to them His verses and purifying them and teaching them the Book and wisdom, although they were before in clear error. (Al-Jumuah 62:2)

Purifying the unlettered means purifying their souls and calling them to good manners. The one who was sent to purify them, he himself practiced self-purification.

We read in another verse: He has succeeded who purifies it. (Ash-Shams 91:9)

About self-purification, Imam Al-Ghazzali says, “It is complementing the human self through suppressing its baser instincts and releasing its higher characteristics.”

So, by mercy from Allah, [O Muhammad], you were lenient with them. And if you had been rude [in speech] and harsh in heart, they would have disbanded from about you. So, pardon them and ask forgiveness for them and consult them in the matter. And when you have decided, then rely upon Allah. Indeed, Allah loves those who rely [upon Him]. (Aal Imran 3:159)

Here Prophet Muhammad is characterized with mercy and leniency towards all people.

There has certainly come to you a Messenger from among yourselves. Grievous to him is what you suffer; [he is] concerned over you and to the believers is kind and merciful. (At-Tawbah 9:128)

O you who have believed, do not enter the houses of the Prophet except when you are permitted for a meal, without awaiting its readiness. But when you are invited, then enter; and when you have eaten, disperse without seeking to remain for conversation. Indeed, that [behavior] was troubling the Prophet, and he is shy of [dismissing] you. But Allah is not shy of the truth… (Al-Ahzab 33:53)

From this verse, we learn that when Prophet Muhammad wanted to stay with his wives and the Companions were gathering with him, he never asked them leave nor he left them and went to his wives. So, the Prophet remained with them until they left the gathering on their own.

[Remember] when you [fled and] climbed [the mountain] without looking aside at anyone while the Messenger was calling you from behind. So, Allah repaid you with distress upon distress so you would not grieve for that which had escaped you [of victory and spoils of war] or [for] that which had befallen you [of injury and death]. And Allah is [fully] Acquainted with what you do. (Aal Imran 3:153)

During the Battle of Uhud, the Muslims fled from the battlefield but the Prophet showed considerable courage and remained in the battlefield along with a few from his companions.

These are some references to the characteristics of Prophet Muhammad. Now, we call our readers to reflect on these manners and how the Prophet applied them throughout his lifetime and commended his followers to embrace them in their daily life and with all people regardless of their race, color or religion.

There are false stories recounted about the Prophet in the media. On hearing these stories, we call our readers to read more about the life of Prophet Muhammad from the original sources of Islam which are the Quran and the Sunnah (Prophetic traditions).