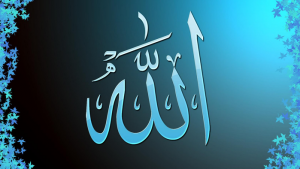 One can do Dhikr and gain lots and lots of good deeds and divine rewards because of that without being noticed by any of the surrounding persons.

What Do You Know About Allah? (Special Folder)

““Allah” is a special word. It indicates the only entity in existence Who truly possesses the qualities of divinity and lordship.

This name belongs to Him alone. No one else shares it. It can never be used as a name for anyone else. No one else can claim it for himself.

“Allah” is the proper name of the only one who is worthy of worship, the one whom all creation praises and glorifies. Everything on land or sea – indeed everything in the seven heavens and the seven earths – glorifies Him. The day and night praise Him.

“The seven heavens and the Earth, and all beings therein, extol His glory: there is not a thing but celebrates His praise; but you do not understand how they praise Him! Verily He is Oft-Forbearing, Most Forgiving!” (Al-Israa’ 17: 44)

“Allah” is comprised of letters and sounds that are easy for everyone to pronounce. They are an “l” an “h” and the vowel sound “aa”. A baby would have no problem with these sounds, regardless of what his native language might be. Even a person with speech impairment could manage to say it.”

In this Special Folder, you are going to learn many things about Allah; just click the following links and you will be there…

Allah is the Indivisible whose essence cannot be divided. He has no partner, and there is no one who can compare with or rival Him in any way. He is One, unique in His names, attributes and actions.

The name As-Samad has many aspects to its meaning. It refers to one who is Lord, who possesses and disposes of all affairs, one whom people come to with their needs, but who at the same time is complete and self-sufficient,

Proving the Existence of Allah to an Atheist

Normally, when I meet an atheist, the first thing I like to do is to congratulate him and say, “My special congratulations to you”, because most of the people who believe in God are doing blind belief – he is a Christian,

Is Allah Confined to Any Place?

The Messenger of Allah has said, “Do not exalt me over him [over Yunus] in nearness to Allah just because I reached the High Throne while he was in the bottom of the sea, for the Adored One is above being confined to space

Allah is Beautiful and Loves Beauty

A Few Words about Allah

“Allah” is the proper name of the only one who is worthy of worship, the one whom all creation praises and glorifies. Everything on land or sea – indeed everything in the seven heavens and the seven earths – glorifies Him.

There is an important point that is ignored by those who believe in evolutionary creation which is Allah’s different forms of creation. Allah has produced living things that differ significantly from humans and animals,

Allah Has Power Over Everything

Allah rules all the systems at any moment in the universe, regardless of whether we are aware of them, or if we are asleep, sitting, walking. Each of the myriad of processes in the universe, all essential to our existence,

There is a grave error committed by Muslim evolutionists who accept the assertion that Allah used evolution to create living things. Unlike other evolutionists, such people do not directly say that life emerged

Is Allah a Loving God?

There Is No God but Him (Allah)

Denying that God is the Creator, and attributing divinity to that which He created, despite the abundance of proof to the contrary, is as nonsensical as claiming that a skyscraper was not built by construction workers,

Why Cannot We See Allah?

Why Does Allah Allow Suffering and Evil in the World?

But then the question comes why do pain, sufferings, and evil exist in the world? We find sickness, old age, and death. We see things that are ugly, people who are insane and foolish. There are storms, earthquakes, floods

The Torah and the Gospel, the earlier revelations from Allah, have lost their original authenticity since the words and interpolations of man have been incorporated into them. This is one of the reasons for