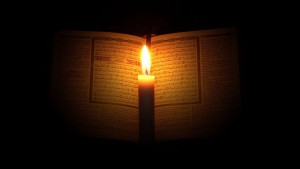 It is falsely alleged that there are verses in the Qur’an promoting violence and Islam in general is a violent religion which urges its followers to be aggressive and offensive.

As a matter of fact, violence does not help in matters of belief. Faith is something cherished at heart. So the true nature of faith is quite unfathomable. Man can be got to adopt or renounce one belief only by persuasion. If force is used, belief may be feigned rather than really held at heart. Once force ceases to be used, the real belief is declared though it used to be kept secret.

The advocate of a right, reasonable belief does not need to use force to compel people to accept it. Allah has made His true religion such a reasonable, palatable belief which people are more likely to accept quite willingly.

Prophet Muhammad was sent to persuade people to believe in Allah. We read the following verse in the Qur’an:

He was ordered to reason with people for logical reasoning is enough for converting people to the way of Allah.

At the very beginning, Prophet Muhammad was commanded not only to convince people by logical reasoning but also to keep patient and endure their illogical attitudes and irrational reactions. We read the following verses in the Qur’an:

And follow what is revealed to you, [O Muhammad], and be patient until Allah will judge. And He is the best of judges (Yunus 10:109)

Endure with patience, for your endurance is not without the help of God. Do not grieve for them, and do not be distressed by their plots. (An-Nahl 16:127)

During Prophet Muhammad’s mission in Mecca, he used to be commanded to keep patient and tolerate all forms of harm done to him by the polytheistic pagans of Mecca who rejected meaningful dialogue and chose to use force as a reaction to Prophet Muhammad’s weighty arguments. The divine commandments then never allowed any violent action; rather they prescribed self-restraint and endurance.

For example, Allah sometimes ordered Prophet Muhammad to pardon the disbelievers and disregard their aggression according to the following verse:

But pardon them and overlook [their misdeeds]. Indeed, Allah loves the doers of good. (Al-Ma’idah 5:13)

Prophet Muhammad was even ordered to reciprocate evil actions with good reactions. Allah said to him in the Qur’an:

And not equal are the good deed and the bad. Repel [evil] by that [deed] which is better; and thereupon the one whom between you and him is enmity [will become] as though he was a devoted friend. (Fussilat 41:34)

When Prophet Muhammad could not bear the barbaric acts of the disbelievers, Allah sometimes commanded him to turn away from them and still come out with peaceful statements. Allah says in the Qur’an:

Prophet Muhammad was also commanded to keep away from the disbelievers but even in a gracious manner. Allah told him in the Qur’an:

And be patient over what they say and avoid them with gracious avoidance. (Al-Muzzammil 73:10)

However, the pagan people of Mecca rejected dialogue and insisted on the use of force to silence the voice of logic and reason. They killed, tortured and drove out the followers of Prophet Muhammad, who himself was also harmed and abused. When such misled pagans dared conspire to kill Prophet Muhammad himself, they inadvertently put an end to the early stage of Islam which adopted peaceful dialogue as a sole way of the propagation of the faith.

From this point on, Muslims have been allowed to use force not to force non-Muslims into conversion to Islam but to defend themselves as both individuals and entities while calling for or engaging in peaceful dialogue. Let’s discuss the earliest verses to be revealed about the permission of the use of force by Muslims.

Permission [to fight] has been given to those who are being fought, because they were wronged. And indeed, Allah is competent to give them victory.

[They are] those who have been evicted from their homes without right – only because they say, “Our Lord is Allah.” And were it not that Allah checks the people, some by means of others, there would have been demolished monasteries, churches, synagogues, and mosques in which the name of Allah is much mentioned. And Allah will surely support those who support Him. Indeed, Allah is Powerful and Exalted in Might.

[And they are] those who, if We give them authority in the land, establish prayer and give zakah and enjoin what is right and forbid what is wrong. And to Allah belongs the outcome of [all] matters. (Al-Hajj 22:38-41)

However, Ibn Abbas and Ibn Jubayr noted that the above verses were revealed upon the emigration of the Messenger of Allah to Medina. Ibn Abbas relates that when Prophet Muhammad had to leave Mecca, Abu Bakr said: “For they caused their prophet to get out, they will perish.” When the above verses were revealed, Abu Bakr said: “I knew that there would be fighting.”

In the above verses, Allah accounts for the permission He gave for fighting against the disbelievers. He explains that the permission of fighting is intended for the believers to defend themselves for they were fought, wronged, and wrongfully driven out of their homes. He also demonstrates that were it not for such permission, the places of worship of all divine religions, including monasteries, churches, synagogues, and mosques, would have been demolished. He also indicates that He thereby empowers those people who if given authority in the land would offer prayer, give alms, join what is right and forbid what is wrong.

We notice that the reasons for Jihad are elaborately expounded in the earliest verses permitting Jihad. For the first time, Muslims were given the right to defend themselves. It is a long-awaited, intuitive right which early Muslims were denied for about thirteen years, during which they suffered all types of persecution, injustice and humiliation.

The Meccan pagans did not shy away from using force for unfair purposes that is to say to wrong Muslims and drive them of their homes. So Muslims should not be blamed for using force for fair purposes, including defending the places of worship and guaranteeing the freedom of religion. Such empowerment of Muslims was meant for benefiting themselves and all other religions. Right is to be enjoined and wrong is to be forbidden in favor of everybody, including Muslims and non-Muslims.

Fight in the way of Allah those who fight you but do not transgress. Indeed. Allah does not like transgressors.

And kill them wherever you overtake them and expel them from wherever they have expelled you, and fitnah is worse than killing. And do not fight them at al-Masjid al- Haram until they fight you there. But if they fight you, then kill them. Such is the recompense of the disbelievers.

And if they cease, then indeed, Allah is Forgiving and Merciful.

Fight them until there is no [more] fitnah and [until] worship is [acknowledged to be] for Allah. But if they cease, then there is to be no aggression except against the oppressors.

The above verses allow Muslims to defend themselves by adopting a tit for tat strategy. However, we notice that even when Muslims were given the permission to use force, such usage was well-regulated and quite moderated. Though they were wronged, they were not allowed to wrong those who wronged us.

Muslims were allowed to fight only those who fought them, assault those who assaulted them and expel those who expelled them. Even if the disbelievers fought Muslims at the holy mosque, the believers could fight them over there.

However, Allah warned Muslims against transgression for He does not like transgressors. Though Muslims suffered transgression at the pagans’ hands, they were not allowed to transgress. Sulayman ibn Buraydah reported on the authority of his father that when the Messenger of Allah sent a commander of an army, he would exhort him concerning himself to have Taqwa of Allah, and he would exhort him to be good to those who are with him among the Muslims. He would say: “Fight in the Name of Allah, in the cause of Allah. Fight those who disbelieve in Allah, and do not steal from the spoils of war or be treacherous, nor mutilate, and do not kill a child.” (Muslim)

Anas reported that Prophet Muhammad said: “Go in Allah’s name, trusting in Allah, and adhering to the religion of the Messenger of Allah. Do not kill a decrepit old man, a young infant, or a child, or a woman; do not be dishonest about booty, but collect your spoils, do right and act well, for Allah loves those who do well.” (Abu Dwaud)

The stated permission is not an absolute one. Rather, it is conditional on the continuation of transgression. If such transgression ceases to exist, there will be no aggression except against oppressors. Such conditionality of permission confirms that this permission is not intended as a kind of revenge or retaliation for past transgressions but just a way for Muslims to defend themselves when embarking upon their prospective mission of preaching monotheism. Thus, the use of force is restricted to defense only. When there is no assault, there should be no use of force.

The main reason for the permission of the use of power is declared in the following statement of Allah:

Fight them until there is no [more] fitnah and [until] worship is [acknowledged to be] for Allah. (Al-Baqarah 2:193)

The Arabic word “fitnah” here means persecution. That is to say, Allah allowed Muslims to fight disbelievers to put an end to persecution and guarantees the freedom of belief even for non-Muslims.

Muslims were not permitted to fight disbelievers to force non-Muslims into Islam but to put an end to persecution in general so that everybody can choose his religion quite freely without compulsion. There can be no compulsion into religion. For Allah to be fair when torturing the disbelievers in the hereafter, they should have been given the choice. Allah deems that it would have been unfair of Him to punish the disbelievers without enabling them to choose for themselves.

It is reported that the reason for the revelation of the above verse is that a Muslim Ansari man who had two Christian sons asked Prophet Muhammad whether he could force them into Islam as they insisted on professing Christianity. Thereupon, this verse was revealed.

Finally, it is unfortunate that some enemies of Islam cite verses from the Qur’an allowing fighting against the disbelievers, claiming that the Qur’an promotes violence against non-Muslims to compel them to convert to Islam. Suffice it to say that the use of force in Islam is, as indicated above, not intended to coerce non-Muslims into Islam but to provide Muslims with sufficient protection when preaching Islam.

The generic context of many verses in the Qur’an allegedly promoting violence is specified by the more particular verses which lay down the rules and regulations of the use of force which is conditionally permitted as set forth above.