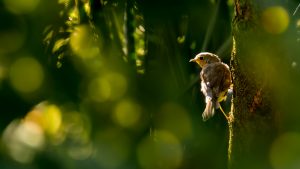 “Despair not of the Mercy of God, for God forgives all sins: for He is Oft-Forgiving, Most Merciful.” (Az-Zumar 39:53)

One aspect of the Mercy of Allah of His slaves is that He sent the Messengers and revealed the Books and laws to organize their lives according to the ways of wisdom, far removed from hardship and difficulty. Allah says:

It is by the Mercy of Allah that He will admin His believing slaves to Paradise on the Day of Resurrection. No-one will ever enter Paradise because of his deeds along as the Prophet, upon whom be peace, said, “No-one’s deeds will ever admit him to Paradise.” They said, “Not even you, O Messenger of Allah?” He said, “No, not even me, unless Allah showers me with His Mercy. So try to be near to perfection. An no-one should wish for death; he is either doing good so he will do more of that, or he is doing wrong so he may repent.” [Al-Bukhari and Muslim]

We hope and pray that this booklet will bring the reader closer to Allah by inspiring you to reflect on the meaning of these ahadith and to increase you in acts of mercy in the blessed month [of Ramadan] and beyond.

“Ramadan has come to you – a month of blessing in which Allah covers you with blessing, for He sends down Mercy, decreases sins and answers prayers. In it Allah looks at your competition (in good deeds) and boasts about you to His angels. So show Allah goodness from yourselves for the unfortunate one is he who is deprived herein of the Mercy of Allah, the Mighty, the Exalted.” (At-Tabarani)

“Allah has made mercy into one hundred parts. He kept with Himself ninety-nine parts and sent down one part to the Earth so because of that part the creation is merciful such that a horse raises a hoof over its child for fear of hurting it.” (Al-Bukhari)

“When Allah decreed the creation He wrote in His Book which is with Him on His Throne: My Mercy prevails over My Wrath.” (Al-Bukhari)

The Messenger of Allah, upon whom be peace, was asked, “O Messenger of Allah pray against the idolators!” So the Prophet said, “Verily, I was not sent to invoke curses but rather I was only sent as a mercy.” (Muslim)

“Those who are merciful will be shown mercy by the Most Merciful. Be merciful to those on the earth and the One above the heavens will have mercy upon you.” (At-Tirmidhi)

“Be merciful to other you will receive mercy. Forgive others and Allah will forgive you.” (Ahmad)

“He who does not show mercy to our little ones or recognize the rights of our elders if not one of us.” (Ahmad)

Adapted with editorial adjustments from a booklet that was published by the valuable charity HHUGS.