Valentine’s Day…ahhhh, the day of “love”!

I’m not going to jump into the evolution of Valentine’s day to what it is today, nor the innovation it is to practice in Islam. 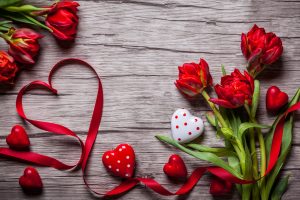 Many become depressed because they still don’t know how to find a spouse, or to find one they are compatible with.

Instead of a history lesson, or barking rules, I would rather give warnings to Muslims and new Muslims about the traps we can fall into, and how we should feel about the intended methods of expressing love in Islam.

New Muslims usually learn very quickly that in Islam love has a different approach than it did before accepting Islam. Since in Islam, we do not “date” and intermingle with the opposite sex, it can cause a new Muslim to feel lost in their “journey of love”.

While learning about the tricks of Shaytan (Satan), which are well hidden behind the mask of red roses, and boxes of chocolate, we can be more on guard and prevent ourselves from falling into such traps.

Single new Muslims, still having the lingering emotional attachment that comes with Valentine’s Day, can really play a number on them. Many become depressed because they still don’t know how to find a spouse, or to find one they are compatible with, leaving them to feel they will forever be alone. This is most prevalent amongst the new Muslim brothers, more so than the sisters.

Although they are permitted to marry from the People of the Book (Jews & Christians), the approach is what makes it difficult because they don’t want to approach marriage in the same regards a Muslim is required to do so. As a result, the brothers tend to resort back to their “pre-Islam” way of interacting with the opposite sex when they feel they can’t find a Muslim to marry– but not always of course.

Non-Muslims in the West will not agree to be in a relationship without touching and kissing, and even without intercourse. Many do not respect the sanctity of marriage and chastity in these days and times. It is difficult to find a non-Muslim in the West that would accept such a “cold” seeming relationship. This is a jihad for the new Muslim brothers.

So, what should they do to overcome these feelings during the time period leading up to and including Valentine’s Day that has engulfed the non-Muslim mindset?

How can they attempt a halal relationship that would lead to marriage with a non-Muslim, especially when there are obstacles like Valentine’s Day in their midst?

There is no cookie cutter answer that will suite everyone. I would suggest that they avoid trying to find a partner that would cause them distress in their religion in this regards. There are pious non-Muslims out there, but they are just really difficult to find these days.

It will be tough to get over such obstacles the first few years of being a Muslim, especially in regards to these sorts of holidays and feeling lonely, but it will fade over time, I promise. Just remember to pray to Allah regularly to help you find ease in overcoming the emotional attachment to such holidays. Sometimes being single is a blessing in disguise. Don’t lose hope!

The “In a Relationship” New Muslim Traps

Some new Muslims may actually still be in a relationship with a non-Muslim, or even a Muslim that they were dating from before they accepted Islam. It is complicated, especially when holidays that revolve around “love and intimacy” come around. It all boils down to avoiding haram situations.

We can’t even think about Valentine’s Day, when the bigger issue we face is that we are in a haram relationship to begin with. New Muslims in this situation are stuck in a state of limbo. They “love” their boyfriend/girlfriend, and don’t want to break up simply because they accepted a new religion. Some feel they should stay in it for the sake of da`wah too. So, what should they do?

No one will ever like to hear the typical advice for this situation, which I agree with, which is to end such relationships. More harm can come from staying in these relationships than leaving them. We need to worry more about pleasing Allah instead of people. If they truly care about your relationship with God, they will understand and accept, and if they don’t, then that is a clear indicator that they are not a good match for you in regards to protecting your religion.

You have to just put your trust in Allah, and pray for it to be easy on you.

It really isn’t worth all the sins that you would accumulate to stay in such relationships. It may in fact cause that person to have respect for you in the end, because they will see your dedication to being a good Muslim, and may cause them to be interested in learning more about Islam since they saw you do something so big for the sake of Allah!

Let’s be realistic, and face it… How many sins are you accumulating by staying in this relationship? If we review just the basics, you will have sins for:

Is it really worth all that?

Satan is very active in relationships outside marriage, so remember what Prophet Muhammad (peace be upon him) told us about how that when a man and a woman are together alone, the Satan is the third wheel.

For those born and raised in Islam, that are involved in such relationships, you are spreading the wrong impression about Islam and how the status of women is raised in Islam.  How can you honestly feel good about having a haram relationship with a woman outside of marriage?

Even if, and when they convert to Islam and learn all this, you can probably expect them to not have respect for you knowing that you were willing to do such a thing! More likely than not, once they learn this about Islam, they will leave you, so it would be all for nothing! Be responsible and give non-Muslims and new Muslims the correct image of Islam about love and marriage from the beginning, because you are not ‘helping’ anyone by doing this.

All of these things are considered cooperating in sin and transgression and disobedience to Allah, who tells us:

Help you one another in Al-Birr and Taqwa (virtue, righteousness and piety); but do not help one another in sin and transgression. And fear Allah. Verily, Allah is severe in punishment. (Al-Ma’idah 5:2)

Alhamdulilah, you have found a mate! However, you are not married yet, and can still fall into the traps of Satan, especially during the time surrounding Valentine’s Day. You have to fight the urges to do the “romantic” things that non-Muslims do on this day. Do not make a special day out of it.

If you find yourself wanting to do these things with your mate, then you need to re-analyze your boundaries in the relationship. It means that you are starting to lean into the haram areas of relationships outside marriage. It calls for hearts to be preoccupied with foolish things that contradict the way of the righteous believers.

The engagement time should still have boundaries in place, and you shouldn’t be “infatuated” with the other. You should simply be just getting to know one another, and not “dating” while engaged.

Does this mean that you can’t have feelings for the other? Absolutely not.

It just means that you have to avoid falling into lust, and infatuation. If you are staying within the guidelines of Islam, you will not get overly attached to the point you would fall into a deep depression if it fell through. You can “care” about someone without being “in love” with them.

Romantic love comes in time. Love will blossom once you are married, so don’t preoccupy yourselves with Valentine’s Day in trying to gain their affection, because it may cause you to lose respect in the end.

Always keep in mind that pre-marital relationship is not always a guarantee for a successful marriage. Usually a couple finds love and happiness and their world revolves around each other, and once they marry, they start to see the “real world, and real life problems” that married couples will encounter and feel when they are sloping downward, and ultimately contemplate if they ever were a good match to begin with. That’s worth thinking about, so while you can care about a person, don’t invest too much of your emotions into it before marriage.

Also, for the sake of Allah, do not plan your wedding day to be on Valentine’s Day! Don’t begin your marriage upon innovation. Marriage takes lots of effort, and you need Allah’s blessings in it.

“And of His Signs is that He created for you from yourselves mates that you may find tranquility in them; and He placed between you affection and mercy.” (Qur’an 30:21)

This verse does not end with “… on Valentine’s day.” This expresses my point to be made for those that are married already. It is important for a Muslim to express their love and appreciation for their spouse every day, instead of focusing their efforts to make them feel special only on one measly day of the year.

Make it a daily habit to show your love and affection, instead of trying to prove it in a once-yearly tradition. Your spouse would rather have it regularly than just “every now and then” anyway.

When you love someone, make sure that you are loving them for the sake of Allah, and that your love for them does not overpower the love you have for Allah. If you feel that you would die without them, or would lose your mind if they were to leave you, then you need to take a step back and purify your heart and mind, because it is pushing the limits Allah sets.

If you are not careful you can fall into the trap of idolizing your partner. This sneaks up on people and they don’t even realize they are doing it. God tests us with things we love, and people we love, so don’t let them become a false idol of the heart.