Hajar and Isma’il alone in the Desert

Pilgrimage is connected with Messenger Ibrahim (Khalil Al Rahman), his wife Hajar and his son Isma’il (PBUT). Prophet Ibrahim was inspired to leave both his wife and baby (Isma’il) alone in a deserted dry valley in Makkah (Ummul Qura). Ibrahim’s wife (Isma’il’s mother) was worried when Prophet Ibrahim intended to leave her alone with her baby; that is why she asked him if Allah (Exalted be He) commanded him to do so. When she became sure that Allah had inspired Ibrahim to leave them alone, she felt reassured and unconcerned.

However; no sooner had the water Ibrahim (PBUH) left for his wife and son been used up than the baby began crying out of thirst and hunger. That is why Hajar soon started looking for water to quench the thirst of her child. First, she mounted Safa Mountain and looked for water, but she saw no water from that direction; hence she ran toward Marwa Mountain and climbed it looking for a caravan or anybody carrying water.

The archangel Gabriel and the well of Zamzam 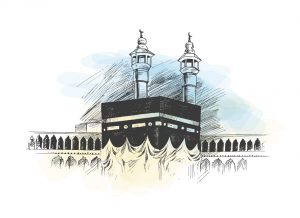 “..and We covenanted with Abraham and Isma´il, that they should sanctify My House for those who compass it round, or use it as a retreat, or bow, or prostrate themselves (therein in prayer).”

Unfortunately, she saw nothing there. She went back running to Mount Safa for the same purpose, but again she found nothing. The concerned kind mother repeated that for seven times without finding any drop of water. At that time, the Archangel Gabriel dug the earth with his heel or wing till water flowed from that place. Once Ismael’s mother saw that, she happily ran toward her son to make something like a basin around the water saying zummi, zummi; that is to say, keep constricted! Keep constricted! That is why it has been called Zamzam. However, there are other opinions about this.

Allah (Exalted be He) eternalizes those hastening races of the believing anxious mother who was worried about her son, and has kept the blessed Zamzam water all these long centuries for the Mekkans as well as the pilgrims to drink and carry portions of it to dear persons in their countries.

The greatest test ever!

Ibrahim (PBUH) was exposed to several severe Divine tests; however, he always proved to be a sincere great believer in his Lord. This time, he saw in a dream that he was slaughtering his dear son Isma’il. And since Prophets’ dreams are true, he intended to fulfill this dream and obey His Lord in spite of his great love to his son. Thus, Ibrahim and Isma’il were exposed to hard test when Ibrahim told Isma’il (PBUT) that he had to slaughter him. Isma’il passed the hard test successfully, when he surrendered to Allah’s will and told his father to carry out what he was inspired to do. What is more, he assured his father that he would be patient.

“O my son! I have seen in a vision that I offer you in sacrifice: what is your view!” (The son) said: “O my father! Do as you are commanded: you will find me, if Allah so wills, one practicing patience and constancy” (Quran 37: 102)

When both father and son obeyed Allah and submitted to His will, they went out toward the sacrifice place to carry out the Divine command. On their way, the devil whispered to Ibrahim so as to bend him from executing the command of Allah on his beloved son, so Ibrahim (PBUH) threw the devil with seven gravels.  From this incident came Al-Aqabah in Mina (the big pillar—a ritual in Hajj where people throw stones at the place where the devil was when he spoke to Ibrahim.

Prophet Ibrahim (PBUH) went on accompanying his son to the sacrifice place so as to carry out the Divine command. Then, the devil appeared for the second time and whispered to Prophet Ibrahim; but again he rejected that and stoned the devil with seven gravels. This became Al-Jamra Al-Wusta (the Middle Pillar).

The devil insisted on misleading Ibrahim (PBUH); so it appeared to him for the third time, so that he might stop him from fulfilling His Lord’s command. However, Ibrahim, again, did not listen to the devil’s speaking, and stoned it with other seven gravels insisting on fulfilling His Lord’s revelation. This then became Al-Jamra Al-Sughra (the small Pillar).

At length, when they reached the sacrifice place Prophet Ibrahim (PBUH) had laid him prostrate on his forehead (for sacrifice), then he passed the knife over Isma`il’s neck, but it did not cut him at all; as Allah (Exalted be He) stopped it to work, and ransomed Isma’il with a big ram coming down from heaven. Thus, from this incident pilgrims have to offer sacrifice as a part of Haj rituals till today.

So when they had both submitted their wills (to Allah), and he had laid him prostrate on his forehead (for sacrifice), We called out to him “O Abraham! “Thou hast already fulfilled the vision!” – thus indeed do We reward those who do right. For this was obviously a trial- And We ransomed him with a momentous sacrifice (Quran 37:103-107)

Then, Isma’il (PBUH) grew up and became a young man, he occupied a considerable position among the tribes that abode near Zamzam well.

Later, Allah (Exalted be He) authorized both Prophets to build up the Holy House of Allah (Al Ka’bah) upon its old bases and commanded them to purify the House of Allah and prepare it for those who perform tawaf or stay in it worshipping Allah or praying for Him.

“..and We covenanted with Abraham and Isma´il, that they should sanctify My House for those who compass it round, or use it as a retreat, or bow, or prostrate themselves (therein in prayer).”  (Quran 2:125)

Moreover, Allah (Exalted be He) has eternalized Hajer’s seven races between Safa and Marwah up till today. Thus, pilgrims follow the steps of Isma’il’s mother when they make the races between Mount Safa and Mount Marwah every time they come for Hajj or Umrah.

Likewise, Allah (Exalted be He) has eternalized what Prophet Ibrahim (the caring father) did when he threw seven gravels at the devil every time, of the three times, it appeared to him with the aim of persuading him not to accomplish the command of Allah.

Undoubtedly, these great incidents reflect the great faith Prophet Ibrahim, his son and wife enjoy within their hearts in spite of all the severe incidents they experienced. Besides, such incidents reveal the absolute wisdom and mercy of Allah upon Ibrahim, his son and wife as well as the pilgrims who visit the house of Allah and carry out the required rituals necessary for Hajj or Umrah.