The hadith (saying of the Prophet) of the seven who are in Allah’s shade, subhanahu wa ta’ala (exalted is He), on the Day of Judgment gives us guidance as to important milestones and markers for our spiritual development. These are goals that should be sought in one’s development.

The Prophet (Allah bless him and grant him peace) said:

There are seven whom Allah will shade in His Shade on the Day when there is no shade except His Shade: a just ruler; a youth who grew up in the worship of Allah, the Mighty and Majestic; a man whose heart is attached to the mosques; two men who love each other for Allah’s sake, meeting for that and parting upon that; a man who is called by a woman of beauty and position [for illegal intercourse], but he says: ‘I fear Allah’, a man who gives in charity and hides it, such that his left hand does not know what his right hand gives in charity; and a man who remembered Allah in private and so his eyes shed tears. (Al-Bukhari and Muslim) 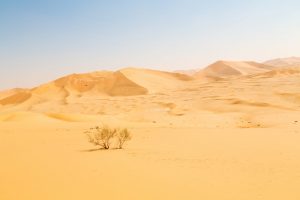 The seven things mentioned all relate to serious developmental goals that should be sought throughout our own personal development and our efforts to help other people in their own growth.

So there are seven things mentioned in this hadith:

The seven things mentioned all relate to serious developmental goals that should be sought throughout our own personal development and our efforts to help other people in their own growth.

The first is to develop a level of Allah-consciousness (taqwa) in the way that one deals with power. Being in a position of authority in Islam is a responsibility that one is held accountable for and it is very serious. Part of that is that our base selves often push us to take advantage of our positions of authority and abuse our power at the expense of others. This is a serious developmental flaw because it shows irresponsibility and a lack of taqwa. We all have varying situations throughout our lives wherein we are in a position of authority and when we have such power we have to look critically at ourselves and hope that Allah gives us good friends who help keep us in line. The developmental lesson here is in learning to act responsibly with power.

2. A youth who grows up in the worship of Allah

The second is a special kind of person that you meet every now and then. They are just good and always have been. These people are truly special because their consistency in worship draws them close to the fitrah, or natural state of being. You can feel their goodness in their interactions and see their genuineness in the details of their behavior. Most of us were not raised this way but that does not mean that we cannot renew our commitment to Allah (swt). That is something that we can do it any time by asking His forgiveness and starting fresh. This developmental point is about being consistent in our servitude to Allah (swt).

3. A man whose heart is attached to the mosques

The third is the one whose heart is attached to the houses of worship. These are the people you meet who organize their lives around prayer. They make every effort to be at the mosque for prayer as much as possible and find beauty and pleasure in doing so. They recognize the peace and tranquility that comes from spending time in the mosque, and they call others to do so as well. This developmental point is about learning to love worship.

4. Two people who love one another for the sake of Allah

The fourth is two people that love each other for the sake of Allah (swt). There are many reasons why we could care for someone in this life. Sometimes those reasons are selfish and sometimes they are selfless. The one who loves solely for Allah’s sake (swt) is selfless in their love. This is a kind of training of the heart that all seekers of the Divine must experience. They must learn to purify their relationships with others and focus them on the ultimate goal, the pleasure of Allah (swt). This developmental point is essentially learning how to love properly and for the right reasons.

5. Someone who resists a direct temptation from the opposite gender

The fifth is someone who is called to fulfill their sexual desires in an unlawful way and resists. This is mentioned as a major trial that can afflict a person and as such the reward for passing it is Paradise. The person who is able to resist such a temptation is someone who has a strong control over their self and a clear awareness of Allah (swt). The developmental lesson is in learning to resist immediate temptations in favor of a greater reward with Allah (swt).

6. A person who is completely selfless in charity

The sixth is someone who is so charitable that they lose track of their charity. The expression here is that their right hand spends so freely that their left hand does not even notice it. This habit is not about simply giving when it is convenient or only on certain things and not others. This is a habit that becomes so much a part of the person’s being that it reaches all causes of goodness. The developmental lesson is in making charity a way of life.

7. A person who remembers Allah in private and sheds tears in doing so.

The seventh, and final, is the one who remembers Allah (swt) in private and tears up. This last one is very intimate. Many people are able to maintain a stable Islamic personality in public, but when they are left alone by themselves they start to slip. Their identity and worship are public affairs but have not reached the inner depths of the self where true spirituality lies. The one who remembers Allah (swt) when alone and cries is the one who has cultivated a truly special and unique relationship with their Creator; an intimate relationship that cannot be explained by words and is only obtained through long periods of struggling for His sake. The developmental goal is to become intimate with Allah (swt) and move past the superficiality of common religious discourse.

Jamaal Diwan was born and raised in Southern California and received a Bachelor’s Degree in Third World Studies and a minor in Psychology from the University of California, San Diego. He has served with the Muslim Student Association (MSA), MSA West, and Muslim American Society (MAS) in varying capacities. He remains an active MAS member and is a scholarship student with the Islamic American University. Jamaal is currently pursuing a Bachelor’s degree at the College of Shari`ah at al-Azhar University in Cairo, and Master’s degrees from the American University in Cairo in Arabic Studies with an emphasis in Islamic Studies.