Prophet Muhammad (peace be upon him) was an orphan who lived under the guardianship of his grandfather, ‘Abd al-Muttalib after his mother’s death. Few years later, his grandfather died. He, then, went to live with his paternal uncle, Abu Talib. Abu Talib used to defend Prophet Muhammad (peace be upon him); however, he did not accept Islam. In general, there are several incidents, supported by authentic proofs from the Sunnah, happened before Muhammad’s prophethood. They include the following:

He worked as a shepherd:

Messenger of Allah (ﷺ) said, “Every Prophet has tended sheep”. He was asked: “And did you?” He replied, “Yes, I tended them for a few carats for the Makkans.” (Al-Bukhari)

It is also very well-known that the Prophet (peace be upon him) worked as a merchant for Khadija (may Allah be pleased with her) (look below: The Prophet’s marriage to Khadija)

There was a war between the tribes of Quraish and Kinana on the one side and the tribe of Qais ‘Ailan on the other. This was called Harb al-Fujjar (the sacrilegious war). All reports that state that Muhammad (peace be upon him) took part in this war are not authentic. However, there are authentic proofs denoting that Prophet Muhammad (peace be upon him) participated in forming the alliance of al-Mutayyabin after the end of the war.

‘Abdu’r-Rahman ibn ‘Awf reported that the Prophet, may Allah bless him and grant him peace, said, “I was present with my uncles at the alliance of the perfumed (Hilf al-Mutayyabin). I would not wish to break it, even for red camels.” (Al-Adab Al-Mufrad) Al-Albany declared this hadith as authentic.

The Prophet’s marriage to Khadijah

All the reports that mention the details of the Prophet’s marriage to Khadija and how they got to know each other are very weak. There is a weak story about the very wealthy business woman Khadija who used to employ men to do her business. She wanted Muhammad (peace be upon him) to work for her because of his honesty. When the profits increased and Khadija’s servant, Maisarah, told her about Muhammad’s good manners and honesty, she liked him. 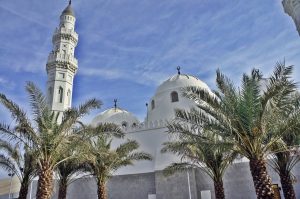 By Allah, Allah will never disgrace you. You keep good relations with your kith and kin, help the poor and the destitute, serve your guests generously and assist the deserving calamity-afflicted ones.

How did the divine revelation start?

Narrated ‘Aisha (The mother of the faithful believers): The commencement of the Divine Inspiration to Allah’s Messenger (ﷺ) was in the form of good dreams which came true like bright daylight, and then the love of seclusion was bestowed upon him. He used to go in seclusion in the cave of Hira where he used to worship (Allah alone) continuously for many days before his desire to see his family. He used to take with him the journey food for the stay and then come back to (his wife) Khadija to take his food likewise again till suddenly the Truth descended upon him while he was in the cave of Hira.

How did the Prophet worship Allah?

In this part of the Hadith, scholars interpret this as a sign that the teachings of Abraham (peace be upon him) were known among a few of the Arabs at that time. To support their opinion, they mention the story of Zaid ibn ‘Amr ibn Nufail who worshipped only one God, Allah during the time of the pre-Islamic period. Then, the Prophet (peace be upon him) worshipped Allah following the way of Abraham.

“Read in the name of your Lord, who has created (all that exists), created man from a clot. Read! And your Lord is the Most Generous.” (Quran 96:1-3)

Then Allah’s Messenger (ﷺ) returned with the Inspiration and with his heart beating severely. Then he went to Khadija bint Khuwailid and said, “Cover me! Cover me!” They covered him till his fear was over and after that he told her everything that had happened and said, “I fear that something may happen to me.”

Khadija replied, “Never! By Allah, Allah will never disgrace you. You keep good relations with your kith and kin, help the poor and the destitute, serve your guests generously and assist the deserving calamity-afflicted ones.”

Khadija then accompanied him to her cousin Waraqa bin Naufal bin Asad bin ‘Abdul ‘Uzza, who, during the pre-Islamic Period became a Christian and used to write the writing with Hebrew letters. He would write from the Gospel in Hebrew as much as Allah wished him to write. He was an old man and had lost his eyesight. Khadija said to Waraqa, “Listen to the story of your nephew, O my cousin!” Waraqa asked, “O my nephew! What have you seen?”

Allah’s Messenger (ﷺ) described whatever he had seen. Waraqa said, “This is the same one who keeps the secrets (angel Gabriel) whom Allah had sent to Moses. I wish I were young and could live up to the time when your people would turn you out.” Allah’s Messenger (ﷺ) asked, “Will they drive me out?” Waraqa replied in the affirmative and said, “Anyone (man) who came with something similar to what you have brought was treated with hostility; and if I should remain alive till the day when you will be turned out then I would support you strongly.” But after a few days Waraqa died and the Divine Inspiration was also paused for a while. (Al-Bukhari)