My name is Amina Blake, I became Muslim 24 yeas ago. I’m going to be recording a series of short videos aimed especially at brand new-Muslims or at Muslims who have been brought up in a very cultural background and are coming into the faith and they want to learn about faith as opposed to culture. 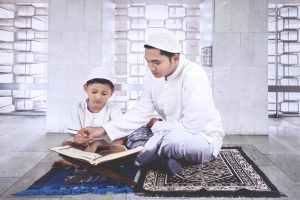 Once a person says the Shahada out of sincere faith, they receive the first good tiding which is the forgiveness of all their past sins.

The Meaning of Shahadah

That’s what the shahadah basically is.

Now, we’ve all been on different journeys to get to that stage of taking the shahadah. Every journey is amazing and every journey is completely individual.

We can see that it is the only true word of God and it’s very clear; it’s there for those to reflect. The Quran challenges us and tells us to reflect on it, to question it, and to delve into it.

Look at the migration of the birds from one place to another using the magnetic fields of the earth; but a bird that can hatch out of an egg and learn how to fly and then will suddenly know its way from here to Africa.

I struggle getting from my house to Tesco’s sometimes and we have much bigger brains than birds.