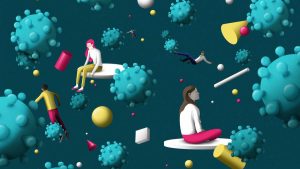 The Future Impact of the Pandemic

“Once we OPEN UP OUR GREAT COUNTRY, and it will be sooner than later, the horror of the Invisible Enemy, except for those who lost a family member or friend, must be quickly forgotten. Our Economy will BOOM, perhaps like never before.”

Along with the childish exaggeration and capitalization and the gross insensitivity to those who have lost loved ones, this tweet is dangerously naïve in its assumption that after the coronavirus runs its deadly course we’ll all just get back to our “normal lives.” In addition to the profound structural changes that this pandemic is already producing in our social, economic, and political spheres, equally concerning will be the psychological impact of the trauma and general unsettledness resulting from all these changes. It is our reaction to this shock that will ultimately shape how we view our lives, understand our world, and deal with challenges in the post-pandemic order.

We have seen this repeatedly play out in human history, including here in the United States. During the last century, the impact of two World Wars and the Great Depression resulted in severe social and economic dislocation – which only later spawned profoundly transformative movements. Both World Wars, for example, fueled intense xenophobia and nativist movements that caused enormous suffering for millions of immigrants and their descendants. As massive numbers of young men went off to fight in these cataclysmic conflicts, women entered the workplace to fill the jobs left vacant. At the same time, Black Americans migrated north in search of employment. New industries and cities grew as the wartime economy flourished to meet the needs of a burgeoning military.

When the wars ended and “Johnny came home,” many were shaken by trauma, lost, and unable to return to normalcy. Those who were able to go back to work ended up displacing the women and Black Americans who had filled those jobs – thus planting seeds that would later grow into the women’s movement and the northern civil rights movement. At the same time, the dislocation brought on by rapid urbanization, especially in the South, gave rise to a uniquely American form of religious fundamentalism.

The trauma brought on by the Vietnam War also had a severe impact. The pain of loss in that war still haunts the lives of survivors and their families and, for a time, psychologically damaged returning veterans swelled the ranks of the urban homeless and addicted. In addition, the controversy fomented by this unpopular war created a deep divide in American society. On one side stood flag-waving “patriots,” while on the other we saw the emergence of a counter cultural movement that challenged and transformed American cultural mores. These divisions have continued to haunt the “Vietnam generation” until the present day.

We need not, however, go back to last century’s World Wars, the Great Depression, or the War in Vietnam and the transformations brought on by these unsettling “shocks to the system.” Instead, we can look to the impact of the more recent Great Recession of 2008-2009 as a case in point.

In late 2008, a sudden financial collapse wreaked havoc on the American economy. Banks were closing, major industries were in danger of collapse, and the financial markets were plummeting and in disarray. In a matter of just a few months middle class Americans saw their pension funds depleted, unemployment doubling, and one-in-five homeowners threatened with foreclosure. The immediate impact was in evidence in our polling. Up until that time, when asked what we call the “American Dream” question – “Will your children be better off than you are right now?” respondents would answer “Yes” by a margin of two-to-one. Now, the tables had turned and by the same two-to-one margin, Americans were answering “No.”

What was fascinating was that in the November 2008 election, voters responded not by recoiling in fear but with hope for the future by electing Barack Obama as president. Republicans, however, sensing an opportunity, preyed on the vulnerabilities of the traumatized middle class. They launched, funded, and organized the “Birther Movement” and the “Tea Party” exploiting racial resentment (their “go to” tactic since the days of Richard Nixon’s “Southern Strategy”) and fear of immigrants and minorities, especially Arabs and Muslims (which they had cultivated in the wake of 9/11), and the mistrust of government (that ironically grew as a result of the dishonest and failed wars led by the Bush Administration as well as its disastrous bungling of Hurricane Katrina). It might very well be said that the seeds of “Trumpism” were planted in this period. But what is important to remember is that while the GOP planted the seeds, it was the traumas from 9/11 through the Recession of 2008/9 that created the fertile ground enabling them to grow and bear their bitter fruit.

In the midst of this current crisis brought on by the coronavirus pandemic, we are witnessing yet another traumatic shock to the system. Signs of unsettling dislocation are everywhere: unemployment is skyrocketing; schools, businesses, and churches are closed; many small businesses are shuttered, never to reopen; a “wartime gig economy” of individuals providing needed services is flourishing; candidates for elective office have been forced withdraw or alter how they reach voters, elections are being postponed, and political conventions cancelled; city centers have become ghost towns with many workers, obeying lockdown orders, now teleworking from home; essential services are strained to the breaking point; and the government is taking on massive new debt in an effort to forestall economic collapse. Millions are living in forced isolation and the strains and fears of the illness and economic uncertainty are taking a toll.

One day we may discover an effective way of treating this virus and/or a vaccine to protect us from it. At that point, the lockdowns will end, and we may return to work. Nevertheless, will we, as some naively predict, go back to living as we did before? Alternatively, will the changes we are now experiencing, transform the way we conduct our lives?

There have been a number of thoughtful essays about what the future will hold for our economy and our social and political institutions. They are fascinating and the discussion they are prompting us to have is an important one. However, aside from the structural changes that may occur, what concerns me here is the impact that this trauma will have on our collective psyche.

While we cannot predict where this will lead us, we can be certain that the shock and fear created by the pandemic are once again plowing fertile ground for future social and political movements. How long it will take for them to ferment; how many of them will emerge; what their messages may be; who will lead them; and how effective or long-lasting their impact will be – this we cannot predict. Nevertheless, what we should know is that we will not just go back to where and how we were before the pandemic.

Adapted with editorial adjustments from IViews.