The things that invalidate Fasting

Fasting becomes invalid if any of the following occurs. However, there are actions that break the fast unanimously and there are other cases on which there is a difference of opinions regarding them. Here is the discussion of that! 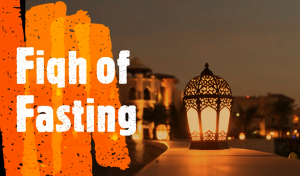 Fiqh of Fasting: There are actions that break the fast unanimously and others where there is a difference of opinions.

1. Anything that reaches the stomach intentionally

If a person swallows anything intentionally even if it is as little as a seed and whether it is taken through the mouth, the nose, etc., the fast is invalid. However, if a person eats or drinks while forgetting that he or she is fasting, their fast is valid.

Narrated Abu Huraira: The Prophet (ﷺ) said, “If somebody eats something forgetfully while he is fasting, then he should complete his fast, for Allah has made him eat and drink.” [Al-Bukhari]

There are three opinions regarding having injections:

First, they invalidate the fast because they enter the body.

Second, they do not invalidate the fast because they are not put into the body through the mouth. Moreover, they are not used to satisfy hunger or thirst and they are not food or drink.

The preferred opinion is the third one. However, it is better to have injections at night if possible.

As for enemas, Islam Question & Answer website discusses this matter as follows:

Concerning enemas which are given to sick people to counteract constipation, there is a difference of opinion among the scholars. Some say that it does break the fast, based on the fact that everything that reaches inside the digestive tract breaks the fast. And some of them said that it does not break the fast. Among those who said that was Shaykh al-Islam Ibn Taymiyah, who said that this is not food or drink, and it is not like food or drink.

What I think is that we should look at the doctors’ opinions concerning that; if they say that this is like food or drink then it should be classified as such and thus it breaks the fast. If they say that this does not give the body what food and drink give it, then it does not break the fast.

There are different opinions regarding cupping and whether it invalidates fasting. Let us look at the most famous proofs related to this issue:

1. ”The cupper and the one for whom cupping is done, both their fasting is broken.”(Abu Dawud, Musnad Ahmad, Al-Nasa’i’s Al-Sunan Al-Kubra) This is an authentic hadith related through several chains of narrations tracing back to the Prophet (peace and blessings of Allah be upon him).

2. Narrated Ibn `Abbas: The Prophet (ﷺ) was cupped while he was in the state of lhram, and also while he was observing a fast. [Al-Bukhari]

3. Narrated Thabit Al-Bunani: Anas bin Malik was asked whether they disliked the cupping for a fasting person. He replied in the negative and said, “Only if it causes weakness.” [Al-Bukhari]

Imam Ahmad ibn Hanbal is of the opinion that cupping invalidates fasting. He used hadith 1 above to support his opinion. In addition, he says that there is a defect in the narration of hadith 2 above and the sound version the following:

Narrated Ibn `Abbas: The Prophet (ﷺ) was cupped while he was fasting. [Al-Bukhari]

On the other hand, the majority of scholars are of the opinion that cupping does not invalidate fasting for hadith 2 and 3 mentioned above. As for hadith 1, the majority’s opinion is that it is abrogated.

There are other interpretations to hadith 1 which help support the majority’s opinion. One interpretation is that it is a specific issue where the persons involved were backbiting people. Thus, they will not be rewarded for their fasting due to backbiting. Cupping has nothing to do with this.

The preferred opinion is that of the majority of scholars. However, it is better to do cupping at night.

Blood donation and biopsies take the same ruling mentioned above.

The issue is discussed in detail in a previous article (click here).

Scholars unanimously agreed that sexual intercourse invalidates the fast. The proofs from the Qur’an, the Sunnah, and the Consensus of scholars are mentioned in the previous article (click here).

There are some issues related to sexual intercourse:

It is allowed for the person observing fasting to kiss, embrace and fondle his or her spouse as long as the spouses are able to control their desires. If the spouses fear that this may lead to having sexual intercourse, then, it is not allowed to continue. In this case, blocking the means to unallowable matter is better because it prevents one from committing an act of disobedience.

There are a number of hadith that support this legal ruling. Here is one of them.

‘A’isha (Allah be pleased with her) reported: Allah’s Messenger (ﷺ) used to kiss (his wives) while fasting and embraced (them) while fasting; but he had the greatest mastery over his desire among you. [Al-Bukhari and Muslim]

Ibn ‘Abbas (may Allah be pleased with him) differentiate between the old and the young.

Abdullah ibn Abbas was asked about people kissing while fasting and he said that he allowed it for old men but disapproved of it for young men. (Muwatta’ Malik)

However, if the person observing fasting has a wet dream during the day, the fast is valid. There is a consensus of opinion regarding this issue.

On the other hand, if a person has sexual intercourse anytime during the night and they do not have a ritual bath till the time of dawn, the fast is valid. The Messenger of Allah (ﷺ) (at times) got up in the morning in a state of major ritual impurity, not because of sexual dreams (but on account of intercourse at night), and then observed fast. [Al-Bukhari and Muslim]

There is a consensus of opinion among the scholars that menses or postnatal bleeding invalidates the fast. If any of them occurs during the time of fasting, the fast is invalid.

The Prophet (ﷺ) said, “Isn’t it true that a woman does not pray and does not fast on menstruating?” [Al-Bukhari and Muslim]

Mu’adha said: I asked ‘A’isha: What is the reason that a menstruating woman makes up the fasts (that she abandons during her monthly course). but she does not make up the prayers? She (‘A’isha) said: Are you a Haruriya? I said: I am not a Haruriya, but I simply want to inquire. She said: We passed through this (period of menstruation), and we were ordered to make up the fasts, but were not ordered to make up the prayers. (Muslim)

“Yet truly it has been revealed to you, O Prophet, and to those of the prophets before you: If ever you were to associate any gods with God, then utterly futile would be all your good works. And, most surely, you yourself would have become among the losers, of an everlasting Paradise.” (Quran 39:65)