Since the height of the feminist movement in the late 70`s there has been a magnifying glass placed over the status of Muslim women.

Unfortunately, the magnifying glass that has been used is an unusual one. Unusual in the sense that it is very selective about which items it will magnify; other items it will distort to such a degree that they will no longer look familiar. 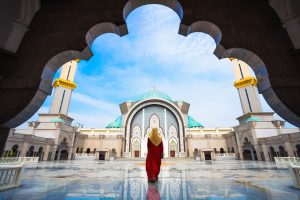 Islam has the most humane and most just system of divorce that exists.

This article can lead anyone ignorant of the Islamic ruling regarding divorce to believe that in less than five seconds the woman is left with no husband and is left to care for herself (and possibly children) by any means necessary.

The question that immediately popped up in my mind was, “Did the author innocently write that out of sincere ignorance or was it another of the many attempts to degrade the religion of Islam and its followers (Muslims)?” It may be out of paranoia, but I tend to believe it was the latter of the two.

The Islamic System of Divorce

The truth of the matter is that Islam has the most humane and most just system of divorce that exists. Firstly, many options are taken and tried before coming to the decision of divorce. If the man and woman decide that they can no longer live together successfully as a husband and wife, the husband (in most cases, not always) pronounces the divorce by saying “I divorce you”. At this point the waiting period begins.

The Purposes of the Waiting Period

The waiting period lasts for three menstrual cycles to assure the woman is not pregnant. This period allows the couple time to think about what they are doing and if this is what they really want to do. There are no lawyers involved to antagonize an already delicate situation.

If the couple carries the divorce through to the birth of the child and the woman suckles the baby, the man is obligated to feed and clothe both his ex-wife for the time the woman suckles (the maximum being two years). After his weaning, the child will be provided for by the father until he/she is no longer in need of support.

It is quite ironic that in such an “advanced society” as America, there are divorce cases in which women are being forced to pay alimony to their ex-husbands. Can this and many other things we know about the American system of divorce compare to the Islamic system of divorce?

Are Women Forced to Marry Men without Their Consent?

I have also read stories wherein it is stated that women are forced to marry men without their consent. This in no way resembles the marriage system in Islam. In Islam the woman marries the man of her choice. She may even marry someone that her mother and/or father objects to. The point is that it is the woman who makes the final decision as to whom she will marry.

Once the man and the woman decide that they are interested in one another for marriage, a dowry is decided upon. A dowry is not a bride’s price but it is a gift from the groom to the bride.

They agree upon a gift that is affordable by the groom. In the time of the Prophet (PBUH) , often things such as livestock and money were given. This is a wise decision in the event that a woman becomes divorced or widowed, she has some financial security to fall back on even if it is for a limited amount of time.

Once the man and woman are married, the man is required to clothe, feed, shelter and educate her (or allow her to be educated) in the same manner as he does himself.

The last distorted image that I will cover is that of the Muslim women`s dress. The western-influenced media portrays our dress to be outdated and oppressive. Needless to say, I differ with these adjectives. Our dress code does not hinder us from doing anything productive in our lives.

Muslim women maintain a variety of jobs, none of which are devalued nor hampered due to their dress code. And as for the timing of Muslim women`s dress during these contemporary times, it seems most appropriate due to decreasing morals in the world today.

For those who say that Islamic dress is outdated, they speak from great ignorance. The decreasing morality and trials of this time makes Hijab even more in need. More than ever before sex crimes are rampant.

Although this society tells women they can wear what they want to wear, anytime a rape occurs the woman is the one put on trial and one of the first questions is, “What were you wearing?” This concept seems as though it is a set up directed against the so-called contemporary woman. Also there is a direct correlation between the respect a man has for a woman and the amount of her body she displays flauntingly.

In conclusion, I hope this article helps to clear up some distorted/misunderstood aspects of Islam and women. Women in Islam are respected and held in high regard. We will never find success and/or solutions to our problems until we realize that Allah knows best and that this disbelieving society will ruin itself.