The Qur’an can be defined as follows:

The speech of Allah, sent down upon the last Prophet Muhammad, through the Angel Gabriel, in its precise meaning and precise wording, transmitted to us by numerous persons (tawatur), both verbally and in writing. 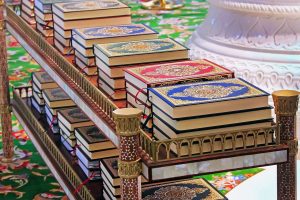 The Quran is the speech of Allah, sent down upon the last Prophet Muhammad, through the Angel Gabriel, in its precise meaning and precise wording, transmitted to us by numerous persons (tawatur), both verbally and in writing.

The Arabic word ‘qur’an‘ is derived from the root qara’a, which has various meanings, such as to read, [Sura 17: 93.] to recite, [Sura 75:18:17: 46.] etc. Qur’an is a verbal noun and hence means the ‘reading‘ or ‘recitation‘. As used in the Qur’an itself, the word refers to the revelation from Allah in the broad sense [Sura 17: 82.] and is not always restricted to the written form in the shape of a book, as we have it before us today.

However, it means revelation to Muhammad only, while revelation to other prophets has been referred to by different names (e.g. taurat, Injil, kitab, etc.).

Other Names of the Qur’an

The revelation from Allah to the Prophet Muhammad is referred to in the Qur’an itself by the name qur’an (recitation) as well as by other names, such as e.g.

All these names reflect one of the various aspects of the revealed word of Allah.

The Meaning of Hadith

There are also reports about him, i.e. about what he was like (sifa).

The Difference between the Qur’an and Hadith

There is agreement among most Muslim scholars that the contents of the sunna are also from Allah. Hence they have described it as also being the result of some form of inspiration. The contents of the sunna are however expressed through the Prophet’s own words or actions, while in the case of the Qur’an the Angel Gabriel brought the exact wording and contents to the Prophet, who received this as revelation and then announced it, in the very same manner that he received it.

The difference between these two forms has been illustrated by Suyuti (following Juwaini) in the following manner:

‘The revealed speech of Allah is of two kinds: As to the first kind, Allah says to Gabriel: Tell the Prophet to whom I sent you that Allah tells him to do this and this, and He ordered him something. So Gabriel understood what His Lord had told him. Then he descended with this to the Prophet and told him what His Lord had told him, but the expression is not this (same) expression, just as a king says to someone upon whom he relies: Tell so-and-so: The king says to you: strive in his service and gather your army for fighting … and when the messenger (goes and) says: The king tells you: do not fail in my service, and do not let the army break up, and call for fighting, etc., then he has not lied nor shortened (the message) …

‘And as to the other kind, Allah says to Gabriel: Read to the Prophet this (piece of) writing, and Gabriel descended with it from Allah, without altering it the least, just as (if) the king writes a written (instruction) and hands it over to his trustworthy (servant) and says (to him): Read it to so-and-so. Suyuti said: The Qur’an belongs to the second kind, and the first kind is the Sunna, and from this derives the reporting of the Sunna according to the meaning unlike the Qur’an.” [Sabuni, tibyan, p.52]

It is generally accepted that the difference between Qur’an and sunna is as follows:

The ahadith from or about the Prophet Muhammad are:

Qudsi means holy, or pure. There are some reports from the Prophet Muhammad where he relates to the people what God has said (says) or did (does), but this information is not part of the Qur’an. Such a report is called hadith qudsi, e.g.:

While the common factor between hadith qudsi and the Qur’an is that both contain words from Allah which have been revealed to Muhammad, the main points of difference between Qur’an and hadith qudsi are as follows:

In the Qur’an the precise wording is from Allah, while in the hadith qudsi the wording is given by the Prophet Muhammad.

Another point is that a hadith qudsi cannot be recited in prayer.

Distinctive Features of the Qur’an

The most important distinction between the Qur’an and all other words or writings therefore is that the Qur’an is the speech from Allah, revealed in its precise meaning and wording through the Angel Gabriel, transmitted by many, inimitable, unique and protected by Allah Himself against any corruption.

The article is an excerpt from the author’s book “Ulum al-Quran: An Introduction to the Sciences of the Quran” with some modifications.