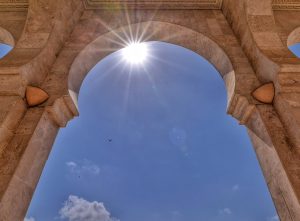 Technology Transfer from the Islamic World to the West

The traditional view of Western historians is that European culture is the direct descendant of the classical civilizations of Greece and Rome. According to this theory, the works of classical authors-mostly in Latin, but some in Greek-were preserved by the Church during the centuries that followed the fall of the Roman Empire, to re-emerge as a potent source of inspiration in the later Middle Ages and the Renaissance. Few would deny the strong influence of classical literature on European thought. Until recently, the works of Homer, Thucydides and the Greek dramatists, of Tacitus, Virgil, and Horace, to name but a few, were part of the cultural background of every educated European.

In science, however, the situation is very different. During the sixth century after the Hijra (twelfth century CE) the writings of such scholars as al-Farabi, al-Ghazali, al-Farghani (Afragamus), Ibn Sina (Avicenna) and Ibn Rushd (Averroes) were translated into Latin and became known and esteemed in the West. The works of Aristotle, soon to become the predominant influence on European thought, were translated from the Arabic together with the commentaries of Ibn Sina and Ibn Rushd to the medieval Europeans. These commentaries were as important as the works of Aristotle himself in forming European scientific and philosophical thought. Many other scientific works, which had originally been translated from Greek into Arabic centuries earlier, were now translated into Latin. However, most of these were from the Hellenistic period, and though they were written in Greek, their authors came from all the countries of the Near East and the eastern Mediterranean. It seems, therefore, that some European writers, being deeply appreciative of the literary masterpieces of Greece and Rome, have been led to believe that Western civilization, in all its aspects, was based upon Greek and Roman foundations. This is not the case with science and technology.

Charles Singer has discussed some of the points already touched upon. The Graeco-Roman heritage was built upon the great civilizations of the Near East and, furthermore, the major achievements in science and technology that are called Hellenistic and Roman were mainly Near Eastern achievements due to the scholars and artisans of Egypt and Syria. The pre-Islamic civilizations from Spain to Central Asia and northern India were inherited by Islam. Under the influence of Islam and the Arabic language, the science and technology of these regions was developed and improved. Referring to the Eurocentrism of Western historians, Singer wrote: ‘Europe, however, is but a small peninsula extending from the great land masses of Afrasia. This is indeed its geographical status and this, until at least the thirteenth century CE, was generally also its technological status.’ In skill and inventiveness during most of the period CE 500 to 1500, Singer continues: ‘the Near East was superior to the West… For nearly all branches of technology, the best products available to the West were those of the Near East… Technologically, the West had little to bring to the East. The technological movement was in the other direction.’

The adoption by Europe of Islamic techniques is reflected by the many words of Arabic derivation that have passed into the vocabularies of European languages. In English, these words have often, but not always, entered the language from Italian or Spanish. To cite but a few examples: in textiles-muslin, sarsanet, damask, taffeta, tabby; in naval matters-arsenal, admiral; in chemical technology-alembic, alcohol, alkali; in paper-ream; in foodstuffs-alfalfa, sugar, syrup, sherbet; in dyestuffs-saffron, kermes; in leather-working-Cordovan and Morocco. As one would expect, Spanish is particularly rich in words of Arabic origin, especially in connection with agriculture and irrigation. We have, for example, tahona for a mill, acena for a mill or water-wheel, acequia for an irrigation canal.

The contributions of Islamic civilizations to science, notably mathematics and astronomy, have long been recognized. The application of this scientific expertise to technology, however, has been neglected. The story of Islamic technology is far from complete. Research in this area is still at an early stage and, notwithstanding what has been published so far, contributions by Islam to science and technology have yet to be fully revealed. During the nineteenth and the first quarter of the twentieth centuries, Western research into Islamic science yielded outstanding results, but only after a long period of silence has that interest now been revived. There is still a need for additional coordinated research if significant results are to be obtained. The field of alchemy/chemistry and chemical technology is a case in point. At present this is an almost totally neglected area in which few seem to have taken even a slight interest since the admirable research several decades ago of Kraus, Ruska, Stapleton, and Wiedemann.