Out of Allah’s wisdom, He gives preference to some of His creatures over others. This applies to almost all creatures. The Islamic lunar months are not an exception. There are four lunar months which Allah favored and made sacred. Allah says,

“Indeed, the (ordained) number of the months with God is twelve (lunar) months, (as was decreed) in the (Preserved Heavenly) Book of God on the day He created the heavens and the earth. Four of them are sacred – (and) that is the upright religion- so do not wrong yourselves (or others) in them.” (Quran 9:36) 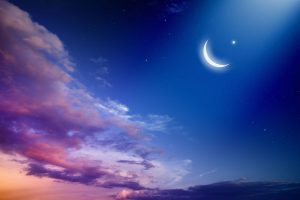 The term Rajab is derived from a word that means glorification. It was so called because in the pre-Islamic period of Ignorance, Arabs used to respect and glorify this month especially the tribe of Mudar.

The Sunnah of the Prophet Muhammad (Allah bless him and grant him peace) makes it clearer which four months they are. These are the last two months of the year, Dhul-Qa’dah and Dhul-Hajjah (or Dhul-Hijjah), the first month, Al-Muharram, and the seventh month, Rajab. Narrated Abu Bakrah:

The Prophet (Allah bless him and grant him peace) said, “Time has come back to its original state which it had when Allah created the Heavens and the Earth; the year is twelve months, four of which are sacred. Three of them are in succession; Dhul-Qa’da, Dhul-Hijja and Al-Muharram, and (the fourth being) Rajab Mudar (named after the tribe of Mudar as they used to respect this month) which stands between Jumada (Al-Akhirah) and Sha’ban.” (Al-Bukhari and Muslim)

These months are sacred so that people can perform the rites of Hajj (Pilgrimage to Makkah) and ‘Umrah (Lesser Pilgrimage) safely. Committing a sin in such months is much more severely punishable than other months. On the other hand, the reward for acts of obedience performed in them is greater. Also, starting a fight in these months is prohibited except only in case of defense.

The Month of Rajab

In his book, Tabyin al-‘Ajab bi-ma Warada fi Shahr Rajab[i], the great Imam and scholar Ibn Hajar mentioned eighteen names for the month of Rajab. The term Rajab is derived from a word that means glorification. It was so called because in the pre-Islamic period of Ignorance, Arabs used to respect and glorify this month especially the tribe of Mudar.

Speaking or writing about the month of Rajab, some people claim some characteristics or acts of worship specific to the month. However, many of the acts of worship that they mention are based on weak evidence.

“Concerning the excellence of the month of Rajab, fasting it (in full) or specific days of it, or performing the night prayer at a specific night of it, there is no authentic hadith to serve as evidence,” Ibn Hajar said[ii].

To better understand the words of Ibn Hajar, we can say that no act of worship to be performed in Rajab on its own. However, the four sacred months still share a few virtues.

Now, Let us discuss if there is an act of worship specific to the month of Rajab. The reason why we do this is that the acceptance of deeds depends on two main prerequisites: sincerity and emulating the Prophet Muhammad (Allah bless him and grant him peace) in worship. So, we should learn which acts of worship are authentic and which are not.

There is no specific or extra prayer to be performed only in Rajab. All the hadiths that prove this are not authentic. Rajab is like all other months regarding this.

Some people claim that it is recommended to perform Salat Al-Ragha’ib on the first Thursday of Rajab between Maghrib (Sunset) and ‘Isha (Evening) prayers. Indeed, it is one of the innovations in religion which scholars have warned against.

It is recommended to fast on Mondays and Thursdays, three days of every lunar month (i.e. the 13th, 14th and 15th days), etc. However, this applies to all lunar months.

Moreover, ‘Umar, Ibn ‘Abbas and other companions (Allah be pleased with them) were reported to have commanded people not to fast the (whole) month.

During the pre-Islamic period of Ignorance, people used to offer a sacrificial animal in Rajab and they called it Al-‘Atirah. Some scholars say that this custom continued for a while after the advent of Islam.

Scholars have divergent opinions concerning it. However, the correct opinion is that the ruling of offering Al-‘Atirah is abrogated.  Narrated Abu Huraira:

The Prophet (ﷺ) said, “Neither Fara’ nor ‘Atira (is permissible)”. Al- Fara’ was the first offspring (of camels or sheep) which the pagans used to offer (as a sacrifice) to their idols. And Al-`Atira was (a sheep which was to be slaughtered) during the month of Rajab. (Al-Bukhari)

Performing the ‘Umrah is recommended all the year round especially during the months of Hajj and the month of Ramadan. So, it is wrong to think that performing it in Rajab is better. Moreover, the Prophet Muhammad (Allah bless him and grant him peace) never performed ‘Umrah in Rajab. Narrated Mujahid:

`Urwa and I entered the Mosque and found `Abdullah bin `Umar sitting beside the dwelling place of `Aisha.

Ibn `Umar replied, “Four, one of which was in Rajab.”

Then we heard `Aisha brushing her teeth whereupon `Urwa said, “O mother of the believers! Don’t you hear what Abu `Abdur-Rahman is saying? He is saying that the Prophet performed four `Umra, one of which was in Rajab.”

The Night Journey and Ascension

There are divergent opinions concerning the exact date of the miracles of Al-Isra’ wal Mi’raj (the Night Journey and Ascension).

The first opinion is that it occurred a year before the Hijrah. Concerning the month, Ibn Hajar said that some storytellers had claimed that Al-Isra’ occurred in Rajab. “It’s a lie,” he commented.

The second opinion is that Al-Isra’ wal Mi’raj occurred a year and a half before the Hijrah. This opinion can be understood from the words of Ibn Qutaibah[iv].

In sum, there is no authentic evidence to prove the night or month when it occurred. I think the Companions (Allah be pleased with them) kept silent about such date so that people would not attach specific acts of worship to such night. This, in turn, would be an innovation in religion.