Upon reaching the site for ihram (a state of ritual consecration during Hajj or ‘Umrah a pilgrim declares his intention to perform one of three types of Hajj (Pilgrimage): 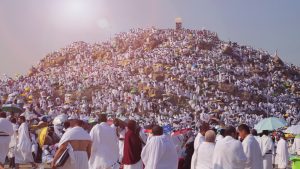 ‘There is no deity but Allah Alone, Who has no partner. To Him belongs dominion, and to Him belongs (all) praise, and He is over all things Omnipotent.

It means that a pilgrim enters the state of Ihram with the intention of performing Hajj only, keeping in the state of Ihram until he stones Jamratul-‘Aqabah on the Day of the Feast of Sacrifice (‘Eid al-Ad-ha; on the tenth of Dhul-Hijjah). Then, a pilgrim shaves his head, and performs the Ifadah (Going forth) Tawaf along with sa’y (going between Al-Safa and Al-Marwah) in case he has not performed it (i.e. sa’y) following the Arrival Tawaf.

The best of the three forms is tamattu’. It is desirable for a pilgrim performing ifrad or qiran and has not got a sacrificial animal to change his intention and perform tamattu’ instead, carrying out all its rites.

It is also desirable for the one performing tamattu’ (even if it has been ifrad or qiran that converted to tamattu’ as well as the residents of Mecca and the surrounding places, to assume ihram for Hajj on the Day of Tarwiyah (the eighth day of Dhul-Hijjah). This is because Jabir (may Allah be pleased with him) narrated, in his description of the Prophet’s performance of Hajj:

“…All the pilgrims dissolved the state of Ihram except the Prophet (PBUH) and whoever had a sacrificial animal with him. When it was the Day of Tarwiyah, they proceeded to Mina and assumed ihram for Hajj.” (Muslim)

The place where you can assume Ihram for Hajj

A pilgrim performing tamattu’ may assume ihram from the place where he stays, whether in Mecca, Mina, or any place outside Mecca, but he should not perform tawaf after assuming ihram for Hajj (as it has been already performed during ‘Umrah).

The Prophet (PBUH) said, ‘And whoever is living within these boundaries can assume ihram from his home, and the people of Mecca can assume Ihram from Mecca. (Al-Bukhari and Muslim)

Heading for Mina on the eighth of Dhul-Hijjah

Once a pilgrim assumes ihram tor Hajj, he should then preoccupy himself with chanting talbiyah and continually repeat it every now and then, raising his voice with it until he stones Jamratul-‘Aqabah on the Day of the Feast of Sacrifice (on the tenth of Dhul-Hijjah). Those pilgrims who have assumed their ihram from Mecca on the Day of Tarwiyah should head for Mina; the optimum time for moving is after the sun has reached its meridian. Then, they perform the Zuhr (Noon) Prayer there, at Mina, camping there until they perform the rest of the Five Daily Prayers including the Fajr (Dawn) Prayer of the following day (the ninth of Dhul Hjjjah). Jabir (may Allah be pleased with him) narrated:

“…The Prophet (PBUH) rode his mount (heading for Mina) and performed there the Zuhr, the ‘Asr (Afternoon), the Maghrib (Sunset), the ‘ Isha’ (Night), and the Fajr (Dawn) Prayers. Then, he(PBUH) stayed there for a while until the sun rose.” (Muslim)

It is worth mentioning that spending that time in Mina (from the noon of the Day of Tarwiyah until the dawn of the following day) and performing those five prayers there is an act of the Sunnah, not an obligatory one. Likewise, assuming ihram on the Day of Tarwiyah is considered an act of the Sunnah. So, it is permissible for a pilgrim to assume ihram before or after that day.

The Day of ‘Arafah

On the ninth of Dhul-Hijjah and after sunrise, a pilgrim proceeds to ‘Arafah; the whole area of ‘Arafah is a standing place except for the valley called Batn ‘Uranah, Thus, it is sufficient for a pilgrim to stand anywhere on that day within the boundaries of ‘Arafah, excluding the place pointed out by the Prophet (PBUH), namely Batn ‘Uranah. The boundaries of ‘Arafah are clearly distinguished by means of signs, so standing anywhere within these boundaries will be regarded as standing at Arafah. Still, a pilgrim has to pay attention to these signs in order not to stand outside ‘Arafah.

When the sun passes its meridian, a pilgrim performs the Zuhr (Noon) and the “Asr (Afternoon) Prayers, shortening and combining them at the due time of the Zuhr Prayer (i.e. performing each as two rak’ahs instead of four) with one prayer call (adhan) and two immediate prayer calls (iqamahs). We should know that a pilgrim shortens every four-rak’ah prayer (i.e. performs it as two rak’ahs) at Arafah, Muzdalifah, and Mina, However, at ‘Arafah and Muzdalifah the prayers are to be shortened and combined whereas they are only shortened at Mina, i.e. performing each prayer at its due time for there is no need for combining them at Mina.

After a pilgrim performs the Zuhr and the ‘Asr Prayers, shortening and combining them (for he is at ‘Arafah), he should spend the rest of the day remembering, invoking, glorifying, and praising Allah, seeking His forgiveness, and so on and so forth. This is to be done while a pilgrim is sticking to his place at ‘Arafah. In other words, a pilgrim does not have to go to the Mount of Ar-Rahman, or to watch it, or even to face it, while performing such supplications; standing anywhere at ‘Arafah while facing the direction of the Ka’bah is sufficient.

The best du’a during Hajj

A pilgrim should spare no effort supplicating Allah and turning to Him in repentance on such a glorious day, whether he is walking, sitting, riding, standing, or even lying down. He should also choose the most comprehensive supplications that were reported to have been observed by the Prophet (PBUH), for he(PBUH)said:

“The best supplication is the one on the Day of ‘Arafah, and the best thing which I and the prophets before me have said is: ‘There is no deity but Allah Alone, Who has no partner. To Him belongs dominion, and to Him belongs (all) praise, and He is over all things Omnipotent.” (Al-Tirmidhi)

A pilgrim keeps supplicating Allah at ‘Arafah until sunset. It is impermissible to leave before sunset, and if a pilgrim does, he must go back soon before sunset, to witness it there. However, if a pilgrim leaves ‘Arafah before sunset and does not go back, he is then obliged to slaughter a sheep of Hajj (or to get one seventh of a camel or a cow) and divide it among the poor residents of the Sanctuary of Mecca in expiation for missing an obligatory ritual of Hajj.

The Day of Arafah starts from the noon of the ninth of Dhul-Hijjah until the dawn of the tenth of Dhul-Hijjah (the Day of the Feast of Sacrifice) according to the sound opinion in this regard. As for a pilgrim who is present at Arafah at daytime, he is obliged to stay there until sunset as we previously said. But if someone arrives at ‘Arafah at night, it is sufficient for him to stay there for any length of time, even if for only one moment, as the Prophet (PBUH) said:

“If anyone gets (i.e. stays at) “Arafah before the dawn (of the tenth of Dhul-Hijjah) breaks, then he has performed Hajj.” (Abu Dawud, Al-Tirmidhi and Al-Nasa’i)

Staying at ‘Arafah is one of the obligatory fundamental rituals of Hajj, and it is the most important and the greatest one as well for the Prophet (PBUH) said:

“Hajj is ‘Arafah (i. e. staying at ‘Arafah is the most important ritual of Hajj). (Al-Bukhari and Muslim)

As for the place of staying at ‘Arafah, a pilgrim may stand anywhere within the boundaries of ‘Arafah, and this ritual is deemed invalid if one stands outside them.