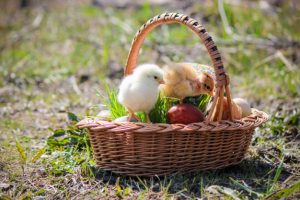 God – be He exalted -has not made any of His creatures worthless.

There is no denying the importance of plants and animals as living resources of enormous benefit, without which neither man nor other species could survive.

God – be He exalted -has not made any of His creatures worthless: every single form of life is the product of a special and intricate development by God, and warrants special respect.
As a living genetic resource, each species and variety is unique and irreplaceable. Once lost, it is lost forever.
By virtue of their unique function of producing food from the energy of the sun, plants constitute the basic source of sustenance for animal and human life on earth.

Then let man consider his nourishment: that We pour down the rain in showers, and We split the earth in fragments, and therein make the grain to grow, and vines and herbs, and olives and palms, and gardens of dense foliage, and fruits and fodder- provision for you and your cattle. (`Abas 80:24-32)

In addition to their importance as nourishment, plants enrich the soil and protect it from erosion by wind and water. They conserve the water by detaining its runoff; they moderate the climate and produce the oxygen which we breathe.

They are also of immense value as medicines, oils, perfumes, waxes, fibers, timber, and fuel. God has said in the Glorious Quran,

Have you seen the fire you kindle? Was it you who grew its timber or did We grow it? We have made it a reminder, and a comfort for the desert- dwellers. (Al-Waqi`ah 56:71-73)

Animals in turn provide sustenance for plants, for one another, and for man. Their dung and their bodies enrich the soil and the seas. They contribute to the atmosphere by respiration and by their movements and migrations contribute to the distribution of plants.

They provide food for one another and provide mankind with leather, hair and wool, medicines and perfumes, and means of conveyance, as well as meat, milk, and honey. And for their highly developed senses and perceptions and their social interrelationships, animals are accorded special regard in Islam.

For God considers them living societies exactly like mankind. God has declared in the Glorious Quran,

“There is not an animal on the earth, nor any being that wings its flight, but is a people like unto you. (Al-An`am 6:38)

The Glorious Quran mentions the aesthetic functions of these creatures as objects of beauty in addition to their other functions. Since peace of mind is a religious requirement which needs to be fully satisfied, those things which cause it should be amply provided and conserved.

God has made in plants and animals that which excites wonder and joy in man’s soul so as to satisfy his peace of mind, a factor which is essential for man’s proper functioning and full performance.

The Glorious Quran also mentions other functions which these creatures perform and which man may not perceive, namely the functions of worshipping God, declaring if His praise and bowing down to Him as they are compelled by their very nature to do.

Do you not see that to God bow down in worship all things that are in the heavens and on the earth -the sun, the moon, the stars, the mountains, the trees, the animals… (Al-Hajj 22:11)

The seven heavens and the earth and all the beings therein proclaim His glory: There is not a thing but celebrates His praise, but you understand not how they declare His glory.  (Al-Israa 17:44)

To God bow all beings in the heavens and the earth -with good will or in spite of themselves. (Ar-Ra`d 13:15)

Islam emphasizes all measures for the survival and perpetuation of these creatures so that they can fully perform the functions assigned to them. The absolute destruction of any species of animals or plant by man can in no way be justified; nor should any be harvested at a rate in excess of its natural regeneration.

This applies to hunting and fishing, forestry and wood-cutting for timber and fuel, grazing, and all other utilization of living resources. It is imperative that the genetic diversity of living beings be preserved–both for their own sake and for the good of mankind and all other creatures.

The Prophet Muhammad (upon him be blessings and peace), was sent by God “as a mercy to all beings. (Al-Anbiyaa 21:107)

He has shown us through his commandments and teachings, how to tend and care for these creatures.

“The merciful are shown mercy by the All-Merciful. Show mercy to those on earth, and He Who is in heaven will show mercy unto you. (Abu Dawud and At-Tirmidhi)

He commanded mankind to provide for the needs of any animals under their care, and he warned that a person who causes an animal to die of starvation or thirst is punished by God in the fire of hell. (Al-Bukhari)

Furthermore, he directed human beings to provide for needy animals in general, telling of a person whose sins God pardoned for the act of giving water to a dog in desperate thirst. Then when the people asked, O Messenger of God is there a reward in doing good to these animals? He said, “There is a reward in doing well to every living thing. (Al-Bukhari and Muslim).

Hunting and fishing for food is permitted in Islam; however, the Prophet peace be upon him) cursed anyone who uses a living creature as a target, taking a life for mere sport. (Al-Bukhari and Muslim)

Likewise he forbade that one prolong an animal’s slaughter. (Al-Bukhari and Muslim)

“God has prescribed the doing of good toward every thing: so when you kill, kill with goodness, and when you slaughter, slaughter with goodness. Let each one of you sharpen his blade and let him give ease to the animal he is slaughtering. (Muslim and Abu Dawud)

The Prophet Muhammad (peace be upon him) forbade that a fire be lit upon an anthill, and related that an ant once stung one of the prophets, who then ordered that the whole colony of ants be burned. God revealed to him in rebuke, “Because an ant stung you, you have destroyed a whole nation that celebrates God’s glory.” (Al-Bukhari and Muslim)

He once ordered a man who had taken the nestlings of a bird from their nest to return them whence he got them, to their mother which was trying to protect them. (Abu Dawud)

He forbade that one needlessly and wrongfully cut down any tree which provides valuable shelter to humans or animals in the desert,”” and the aim of this prohibition may be understood as prevention of the destruction of valuable habitat for God’s creatures.

On the basis of the Prophetic commands and prohibitions, Muslim legal scholars have ruled that God’s creatures possess inviolability (hurmah) which pertains even in war:

The Prophet (peace be upon him) forbade the killing of bees and any captured livestock, for killing them is a form of corruption included in what God has prohibited in His saying, “And when he turns away, he hastens through the land to cause corruption therein and to destroy the crops and cattle: And God loves not corruption.” (Al-Baqarah 2:205)

For they are animals with the spirit of life, so it is not lawful to kill them in order to gall the enemy idolaters… And they are animals possessing inviolability just as do women and children.

It is a distinctive characteristic of Islamic law that all animals have certain legal rights, enforceable by the courts. Muslim jurists have written:

“The rights of livestock and animals with regard to their treatment by man: These are that he spend on them the provision that their kinds require, even if they have aged or sickened such that no benefit comes from them; that he not burden them beyond what they can bear; that he not put them together with anything by which they would be injured, whether of their own kind or other species, and whether by breaking their bones or butting or wounding; that he slaughter them with kindness if he slaughters them, and neither flay their skins nor break their bones until their f bodies have become cold and their lives have passed away; that he not slaughter their young within their sight; that he set them apart individually; that he make comfortable their resting places and watering places; that he put their males and females together during their mating seasons; that he not discard those which he takes in hunting; and neither shoot them with anything that breaks their bones nor bring about their destruction by any means that renders their meat unlawful to eat. (‘Izz ad-Din ibn `Abd as-Salam, Qawa `id al-Ahkamfi Masalih al-Anam. )

Islam looks upon these created beings, both animals and plants, in two ways:

1) As living beings in their own right, glorifying God and attesting to His power and wisdom;

2) As creatures subjected in the service of man and other created beings, fulfilling vital roles in the development of this world.