Allah, the Creator, has not only brought about the creation, but continues to sustain and direct it, in the way that He has created us and all that is around us. He has provided many forms of guidance, indeed, a system of guiding principles, of which the laws of ‘nature’ are a part. 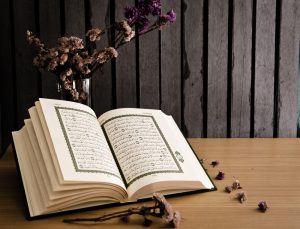 The word awha, from which ‘wahy’ (revelation) is derived, occurs in a number of shades of meaning in the Qur’an, each of them indicating the main underlying idea of inspiration, directing or guiding someone.

But Allah has also granted a special form of guidance for mankind from the outset of its occupancy of the earth. He promised to Adam and his descendants:

‘Get ye down all from here; and if, as is sure, there comes to you guidance from Me, whosoever follows guidance, on them shall be no fear, nor shall they grieve’ (Quran 2: 38).

[The word here used for guidance is hudan.] This guidance comes through the prophets, whom Allah continuously sent to mankind, until the last messenger, Muhammad received His final guidance.

We call a man to whom God in His own way communicates His guidance, a prophet or messenger (nabi, rasul). Prophets receive the word of God through revelation and then communicate it to their fellow human beings:

They were messengers- bearers of glad tidings and forewarners- so that after (the coming of) the messengers people would have no argument before God (to justify their misdeeds). Indeed, ever is God overpowering, all-wise.’ (Quran 4: 163-5).

The three words italicized (capitalized) in the above translation are both derived from the Arabic root ‘wahy‘.

The Meaning of Wahy

The word awha, from which ‘wahy‘ (revelation) is derived, occurs in a number of shades of meaning in the Qur’an, each of them indicating the main underlying idea of inspiration, directing or guiding someone. In each example below, the italicised words in the translation are forms of the root word wahy in the original text of the Qur’an:

‘So Zakaria came out to his people from his chamber: he told them by signs to celebrate God’s praises in the morning and in the evening’ (Quran 19: 11)

‘Likewise did we make for every messenger an enemy evil ones among men and jinns, inspiring each other with flowery discourses by way of deception …’ (Quran 6: 112)

Wahy in the sense of ‘revelation’ is guidance from God for His creation, brought by the Prophets, who received the word from God through one of the means mentioned in the following Qur’anic verse:

‘It is not fitting for a man that God should speak to him except by inspiration, or from behind a veil, or by sending of a messenger to reveal with God’s permission what God wills: for He is Most High, Most Wise’ (Quran 42: 51)

Means of revelation are:

The Qur’an revealed to Muhammad

Prophet Muhammad, the last of God’s messengers, received the revelation of the Qur’an through a special messenger sent by God for this purpose: the Angel Gabriel, who recited to him God’s words exactly.

The Descent of the Qur’an

According to Suyuti’ [al Itqan fi ulum al quran, Beirut, 1973, Vol. I pp. 39-40] on the basis of three reports from ‘Abdullah Ibn ‘Abbas, in Hakim, Baihaqi and Nasa’i, the Qur’an descended in two stages:

This second descent from the heaven to the heart of the Prophet is referred to in Sura al-isra’ (17) and Sura al-furqan (25).

The article is an excerpt from the author’s book “Ulum al-Quran: An Introduction to the Sciences of the Quran” with some modifications.