Islam gives a great importance to the cleanliness and purity of one’s clothes. Almighty Allah says: 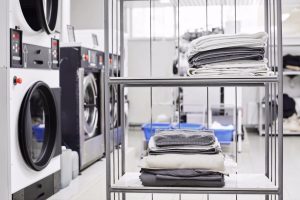 It is well-known that Impurities on clothes can be removed by washing by hand or washing machines; they can also be cleaned by dry-cleaning machines.

Most of the contemporary jurists are of the view that it is a fundamental condition to remove najasah (impurity or unclean substances) with water. It is the same ruling as purification from both minor and major hadath (performing ablution or ritual bath) that can be done with water.

Imam An-Nawawi (may Allah have mercy on him) said in Majmu` Al-Fatawa, “Purifying oneself from the hadath (both minor and major) and removing impurities can only be done by using clean and pure water. He also added, ‘This is the view of our school of Fiqh (Ash-Shafi`iah) and and the majority of the Salaf (rightly guided successors) and those who came after them.”

However, Imam Abu Hanifah sees that it is allowed to purify impurities with pure liquids that could remove it. Sheikh Ibn Taiymiyah also had the same opinion.

When Sheikh Ibn `Uthaimeen was asked about such ruling, he said, “Removing impurities is not an act of worship, rather the purpose of removing impurity is to remove the uncleaned substances, so whatever remove the impurity and its traces, then It is purifier, regardless it is done with water or anything else. Indeed, according to the more correct view which was favored by Sheikh Ibn Taiymiyah, if it is removed by means of sunlight and wind, then the place is purified, because it is as I said: the issue here is the impure substance, and wherever the impure substance is found, that place is regarded as impure, and when it is removed the place goes back to its original state.”

At the end, there seems to be nothing contrary to remove impurities and uncleaned substances on clothes by dry cleaning.