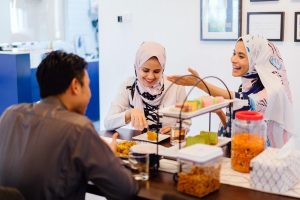 The word Eid in Arabic means: ‘a gathering of a group at any day.’ It is also related to the meaning: ‘to return’ which indicates that this day returns again every year. From an Islamic perspective, Eid is the day Muslims celebrate finishing the fasting of the month of Ramadan.

Allah said: “They say: all praise is for God [alone] who has guided us to this! Nor would we ever have been guided had God not guided us.” [Al-A`raf 7:43].

It is a celebration of love and joy for practicing one of the most beloved acts to Allah, fasting! Allah said in the holy Hadith: “All acts of the son of Adam are for himself but fasting, it is for Me and I shall reward by it.” (Hadith narrated by Baihaqi).

Eid for Muslims is a time of unity when they all break their fast together and perform a prayer out in the open [preferably] with men, women, elderly, adults and kids all attending the prayer. Ibn Abbas narrated that the Prophet (PBUH) used to bring his wives and daughters to Eid prayer. (Hadith narrated by Ibn Majah).

Eid for Muslims is an act of worship toward Allah (SW). Allah (SW) said: “For each [faith] -community We have appointed [sacred] rites, so that they may mention the name of God.” [Al-Hajj 22:34].

Eid (El-Fitr & Al-Adha) are the only two Eids (holidays) celebrated in Islam. When the prophet (PBUH) came to Madinah, he found that people used to celebrate two days during the time of ignorance period (Jahiliyya). He said: “I came to you and you have two days you celebrated during (Jahiliyya) and Allah has substituted for you better days: the Day of Sacrifice and the Day of breaking Fast.” (Hadith narrated by Ahmad & Abu Daoud).

Eid for Muslims is a celebration of the symbol of being clean from your sins and bad deeds. The prophet (PBUH) said: “Whoever did fast Ramadan out of faith and hoping for rewards [from Allah] (SW), forgiveness will be granted to all his past sins.” (Hadith narrated by Ahmad).

Eid for Muslims is the time for entertainment and having fun. When the Abyssinians came to the Mosque in Madinah with their dancing performance, the prophet (PBUH) called on Aisha (RAA) to watch. When Omar son of Al-Khattab saw them performing in the Mosque and wanted to stop them, the prophet (PBUH) said: “Leave them alone O Omar, this is what they do.” The prophet (PBUH) then looked at them and said: “Be safe [while performing] and let the people of the Book know that there is a space in our religion [for entertainment].” (Hadith narrated by Bukhari).

Eid for Muslims is a time when they remember the poor by giving charity before the Eid prayer so the poor can use it to enjoy on such a day what they might be missing on other days. Zakatul Fitr is the term used for such a charity; Ibn Omar (RAA) said: “The Prophet (PBUH) ordained Zakatul Fitr of Ramadan from dates or barley on everyone had it be a free man or a slave, a male or a female and young or old. (Hadith narrated by Bukhari).

In this blessed Eid we pray to Allah to grant us all the Barakah and blessings of this Eid. We pray that Allah will unite Muslims and bring happiness and joy to them in this life and in the Hereafter.