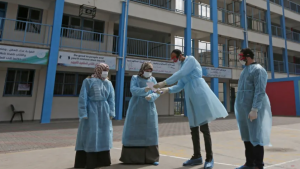 Quarantine: A Palestinian Guide to Survival

Call it a ‘quarantine’, a ‘shelter-in-place’, a ‘lockdown’ or a ‘curfew’, we Palestinians have experienced them all, though not at all voluntarily.

Personally, the first 23 years of my life were lived in virtual ‘lockdown’. My father’s ‘quarantine’ was experienced much earlier, as did his father’s ‘shelter-in-place’ before him. They both died and were buried in Gaza’s cemeteries without ever experiencing true freedom outside of their refugee camp in Gaza.

Currently in Gaza, the quarantine has a different name. We call it ‘siege’, also known as ‘blockade’.

In fact, all of Palestine has been in a state of ‘lockdown’ since the late 1940s when Israel became a state and the Palestinian homeland was erased by Zionist colonialists with the support of their Western benefactors.

That lockdown intensified in 1967 when Israel, now a powerful state with a large army and strong allies, occupied the remaining parts of Palestine – East Jerusalem, the West Bank and the Gaza Strip.

Under this lockdown, the Palestinian freedom of movement was curtailed to the extent that Palestinians required permits from the Israeli military to leave the Occupied Territories or to return home, to move about from one town to the other, and, at times, to cross a single Israeli military checkpoint or a fortified wall.

In Palestine, we don’t call our imprisonment a lockdown, but a ‘military occupation’ and ‘apartheid’.

As for ‘shelter-in-place’, in Palestine, we have a different name for it. We call it a ‘military curfew’.

Since I was a child, I learned to listen intently to orders barked out by Israeli military officers as they swept through our refugee camp in Gaza declaring or easing military curfews. This ritual often happened late at night.

“People of Nuseirat, per orders of the Israeli military you are now under curfew. Anyone who violates orders will be shot immediately,” the terrifying words, always communicated through a loudspeaker in broken Arabic, were a staple during the First Palestinian Uprising (Intifada) of 1987.

The period between 1987 to 1993 was a virtual ‘lockdown’. Thousands of people, mostly children, were killed for failing to respect the rules of their collective imprisonment.

In Gaza, even when a full military curfew was not in place, we rarely left our small and crowded neighborhoods, let alone our refugee camps. We were all haunted by the fear that we may not be able to make it home by 8p.m., the time designated by the Israeli military for all of us to return home.

Every day, ten or fifteen minutes after the nightly curfew set in, we would hear the crackling and hissing of bullets as they whistled through the air from various distances. Automatically, we would conclude that some poor soul – a worker, a teacher, or a rowdy teenager – missed his chance by a few minutes, and paid a price for it.

Now that nearly half of the population of planet Earth are experiencing some form of ‘curfew’ or another, I would like to share a few suggestions on how to survive the prolonged confinement, the Palestinian way.

Since we knew that a complete lockdown, or a military curfew, was always pending, we tried to anticipate the intensity and duration of it and prepare accordingly.

For example, when the Israeli army killed one or more refugees, we knew in advance that mass protests would follow, thus more killings. In these situations, a curfew was imminent.

Number one priority was to ensure that all family members congregated at home or stayed within close proximity so that they could rush in as fast as possible when the caravan of Israeli military jeeps and tanks came thundering, opening fire at anyone or anything within sight.

Lesson number one: Always think ahead and prepare for a longer lockdown than the initial one declared by your city or state.

My father had a bad temper, although a very kind heart. When curfews were about to start, he would enter into a near-panic state. A chain smoker with obsessive, although rational fear that one of his five boys would eventually be killed, he would walk around the house in a useless rush, not knowing what to do next.

Typically, my mother would come in, rational and calculating. She would storm the kitchen to assess what basic supplies were missing, starting with the flour, sugar and olive oil.

Knowing that the first crackdown by the Israelis would be on water supplies and electricity, she would fill several plastic containers of water, designating some for tea, coffee and cooking, and others for dishes and washing clothes.

Per her orders, we would rush to the nearby stores to make small but necessary purchases – batteries for the flashlight and the transistor radio, cigarettes for my dad, and a few VHS videotapes which we would watch over and again, whether the curfew lasted for a few days or a few weeks.

Lesson number two: Take control of the situation – do not panic – and assign specific responsibilities to every family member. This strengthens the family unit and sets the stage for collective solidarity desperately required under these circumstances.

I cannot emphasize this enough. Even if you think that a water crisis is not impending, do not take chances.

It is easy to feel invincible and fully prepared on the first day of quarantine – or military curfew. Many times, we lived to regret that false sense of readiness, as we drank too much tea or squandered our dishwashing water supplies too quickly.

In this case, you have a serious problem, especially during the summer months when you cannot count on rainwater to make up for the deficit.

Years after the end of the Intifada, my father revealed to us that many a time, him and mom used the rainwater they collected in buckets throughout the house, including the leaked roofs for our drinking supplies, even when there was no electricity or gas to boil the water beforehand.

In retrospect, this explains the many bouts of diarrhea we experienced, despite his assurances that they had painstakingly removed all bird droppings from the salvaged water.

Lesson number three: Cautiously use your water supplies during a quarantine, and never, under any circumstance, drink rainwater or, at least, keep diarrhea pills handy.

The same logic that applies to water applies to food. It goes without saying that any acquired food would have to cover the basics first. For example, flour, which we used to make bread, comes before bananas, and sugar, which we consumed abundantly with tea, comes before Dutch candy.

I made that mistake more than once, not because of my love for the imported Dutch candy which we purchased from Abu Sa’dad’s store, located in the center of the camp. The truth is, my brothers and I played a strange form of candy poker which kept us entertained for many hours. I dreaded running out of my precious supplies before the curfew was over, thus subjugating myself to potential humiliation of having to auction everything else I owned – including my small radio – to stay in the game.

My poor mother was devastated numerous times by the horrible choices we made when we rushed to buy ‘essentials’.

Lesson number four: Agree in advance on what classifies as ‘essential food’, and consume your food in a rational way. Also, if you are lucky enough to locate Dutch candy in whatever version of the Abu Sa’dad’s store, in your town, do not gamble it all in one day.

If electricity is still available, then you still have the option of watching television. For us, Indian movies, especially those starring Amitabh Bachchan, were the number one option. Imagine my disappointment when our beloved movie star, who helped us through numerous military curfews in Gaza, was photographed grinning with right-wing Israeli Prime Minister Benjamin Netanyahu during the latter’s visit to India in 2018.

If electricity is cut off, be ready with alternative options: books, free wrestling, living-room soccer (with the ball preferably made from stuffed-up socks contributed by all family members), and, of course, candy poker.

Lesson number five: The key is to have more than one form of entertainment and to be prepared for every eventuality, including power outages as a form of collective punishment.

Find the Humor in Grim Situations

Don’t focus on the negatives; there is no point or wisdom in that. Emphasizing the grimness of a situation can only contribute to the feeling of defeat and powerlessness that are already generated by the lockdown. There will be plenty of time in which you can look back, reflect, and even bemoan your unfortunate circumstance.

But, during the curfew itself is when you actually need your sense of humor most. Take things lightly – laugh at your miserable situation, if you must. Forgive yourself for not being perfect, for panicking when you should have been composed, or for forcing your younger brother to gamble his underwear when he runs out of Dutch candy.

Difficult situations can offer the kind of scenarios that can be interpreted in two extreme ways: either extremely tragic or extremely funny; opt for the latter whenever you can, because as long as you laugh, as long as your spirit remains unbroken, your humanity remains intact.

Lesson number six: Be funny, don’t take life too seriously, share a laugh with others, and let humor inject hope in every hour and every day of your quarantine.

Hold Tighter to Your Faith

Whether you are Muslim, Christian, Jewish, or any other faith; whether you are an atheist, agnostic, or practice any form of spirituality, philosophy or belief system, find comfort in your faith and beliefs.

Since all mosques in our refugee camp were shut down, if not raided during a military curfew, the call for prayer, which we heard five times during each day, was permanently silenced.

To keep the call for prayer going, we would sneak to the roof of our houses, carefully scan the area for any Israeli soldiers, and collectively make the call for prayer whenever it was required. Volunteers included my English teacher, who was communist and claimed that he did not believe in God, myself, and Nabil, the neighbor boy with the massive head and the most unpleasant voice.

In curfews, we developed a different relationship with God: He became a personal and more intimate companion, as we often prayed in total darkness, whispered our verses so very cautiously as not to be heard by pesky soldiers. And, even those who hardly prayed before the curfew kept up with all five prayers during the lockdown.

Lesson number seven: Let your values guide you during your hours of loneliness. And if you volunteer to make a call for prayer (or recite your religious hymns) please be honest with yourself: if you have no sense of rhythm or if your voice has the pitch of an angry alley cat, for God’s sake, leave the job to someone else.

I hope that under no circumstances you will ever hear these ominous words: “You are now under curfew. Anyone who violates orders will be shot immediately.” I also hope that this COVID-19 quarantine will make us kinder to each other and will make us emerge from our homes better people, ready to take on global challenges while united in our common faith, collective pain and a renewed sense of love for our environment.

And when it’s all over, think of Palestine, for her people have been ‘quarantined’ for 71 years and counting.

Ramzy Baroud is a journalist and the Editor of The Palestine Chronicle. He is the author of five books. His latest is “These Chains Will Be Broken: Palestinian Stories of Struggle and Defiance in Israeli Prisons” (Clarity Press, Atlanta). Dr. Baroud is a Non-resident Senior Research Fellow at the Center for Islam and Global Affairs (CIGA), Istanbul Zaim University (IZU).