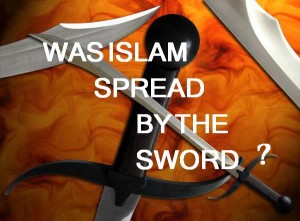 “I became more than ever convinced that it was not the sword that won a place in Islam in those days in the scheme of life.” Gandhi

It is a widespread belief that Islam was spread by the sword. There are two main reasons showing that this was in fact not the case.

First, the Messenger of Mercy, Prophet Muhammad (peace be upon him), proclaimed that he would adhere to God’s commandments. And contrary to forcing people to accept Islam, God explicitly prohibited forced conversion:

There is an interesting story related to the revelation of this verse. A man, who was among the companions of the Prophet, had two sons who embraced Christianity before the emergence of the religion of Islam. The two sons came to Medina among a group of Christians, and at that time their father insisted that they both should become Muslims. However, they refused their father’s request and brought the matter before the Prophet. The father asked, “Oh Prophet of Allah, how could part of me enter hell while I am watching?” It was then that God revealed the above verse forbidding any compulsion in religion. Thus, the man’s two sons were free to remain Christians. The Messenger of mercy did not force them to become Muslims according to their father’s wish.

In another verse, the Qur’an says:

All admit, even those who accuse the Prophet of forced conversions, that the Prophet was a God-fearing person who obeyed Him whole-heartedly in everything. How, then, can he violate these explicit divine commands?

It is true that the Prophet was extremely keen to convey God’s message and to lead people to salvation. The Qur’an describes this eagerness:

Would you, perhaps, torment yourself to death with grief over them if they are not willing to believe in this message? (Al-Kahf 18:6)

But this eagerness never prompted him to convert even a single person against his will.

Second, there is no historical evidence suggesting that the Prophet Muhammad acted contrary to the principle that there should be no compulsion in religion. There is not a single recorded instance in the Prophet’s thoroughly documented life of such an incident. Although some early Western historians advanced such claims, more recent studies have shown that conversions did not happen suddenly at the point of the sword, but when people living alongside Muslims gradually and genuinely accepted the faith voluntarily. Indeed, it is as the Orientalist George Sale said: “Whoever says that Islam spread by the power of the sword, his/her word is a pure allegation, because the sword was not even mentioned in many countries and Islam spread there.”

Mahatma Gandhi, the father of the nation of India, once said, “I became more than ever convinced that it was not the sword that won a place in Islam in those days in the scheme of life. It was the rigid simplicity, the utter self-effacement of the Prophet, the scrupulous regard for his pledges, his intense devotion to his friends and followers, his intrepidity, his fearlessness, his absolute trust in God and his own mission.”

The famous French historian Gustave Le Bon stated in his book, Arab Civilization, “Power was not a factor in the spread of Islam; that’s because Arabs left the people they vanquished free to practice their own religion.”

Another famous European writer, Thomas Carlayle, said: “Accusing [the Prophet] of relying on the sword for people to respond to his preaching is incomprehensible nonsense!”

History, logic, objectivity, and scholarly research all reject the notion that the Prophet Muhammad forced his religion on unwilling masses. It was voluntary acceptance and the utter conviction of the truth of Islam that caused mass conversions in many countries. Indonesia, Malaysia, China and several South Asian countries are telling examples of this reality. We can see a glimpse of this today – though in a less dramatic way – in Europe and North America where in those continents Islam is the fastest growing religion.

Source: Taken from the author’s Ten Questions and Answers about the Prophet Muhammad.