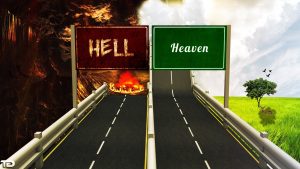 The value of something can be appreciated by comparison.

When God created the Prophet Adam (peace be upon him), the first man on earth, and his wife, He placed them in Paradise. However, as we are informed by the Qur’an, in Paradise, Adam and his wife were tempted to evil and transgressed God’s prohibition.

This story allows us to recognize that a human tends to appreciate the beauty and value of something good if he can compare it to something evil. He grasps the wickedness of evil if he knows that which is good. The value of something can be appreciated by comparison. Having been placed in Paradise first, the Prophet Adam (peace be upon him) and his wife had never been to a place that could be compared to Paradise and thus failed to appreciate the difference. Therefore, people who would otherwise fail to value the blessings and perfection of Paradise, are given the chance to compare by being first created in this world, a place where good and evil exist simultaneously.

For the purpose of better comparison, on the Day of Judgement, when everyone will be raised, God will gather all people around Hell and then save those people of faith who were attentive in their observance of His limits. Someone who sees Hell with his own eyes will certainly understand, from his own experience, that Paradise is a great salvation and blessing:

“By your Lord, We will collect them and the evils together. Then We will assemble them around Hell on their knees. Then We will drag out from every sect the one among them most insolent towards the All-Merciful. Then it is We Who will know best those most deserving to roast in it. There is not one of you who will not come to it. That is the final decision of your Lord. Then We will rescue those who had fear of God and We will leave the wrongdoers in it on their knees.” (Maryam: 68-72)

In this world, God promises Paradise, a life of infinite beauty, to those who can appreciate this truth:

“But as for those who believe and do right actions, We will admit them into Gardens with rivers flowing under them, remaining in them timelessly, forever and ever. God’s promise is true. Whose speech could be truer than God’s?” (Al-Nisa’: 122)

Those who have chosen the way of untruth, although they were warned and guided to the straight path, will be placed in Hell, where an eternal punishment will be inflicted on them. Surely, this is the fulfillment of God’s infinite justice:

“Those who are disbelievers will be driven to Hell in companies and when they arrive there and its gates are opened its custodians will say to them, “Did Messengers from yourselves not come to you, reciting your Lord’s Signs to you and warning you of the meeting on this Day of yours?” They will say, “Indeed they did, but the decree of punishment is justly carried out against disbelievers.” (Al-Zumar: 71)

The nature of man is inherently disposed to practicing the values and character praised in the Qur’an. This is the model of a believer that pleases God. God makes clear to man what is evil and what is good. In addition, God has given man eyes, ears, a heart and the faculty of judgment, with which to distinguish good from evil. Because, through these qualities, man may easily come to recognize God’s existence and greatness, and have faith in Him, it is apparent that those who choose to disbelieve would not deserve to be treated the same as believers. God describes how these two groups will be distinguished in the hereafter as follows:

“God calls to the Abode of Peace and He guides whom He wills to a straight path. Those who do good will have the best and more! Neither dust nor debasement will darken their faces. They are the Companions of Paradise, remaining in it timelessly, forever. But as for those who have earned bad actions—a bad action will be repaid with one the like of it. Debasement will darken them. They will have no one to protect them from God. It is as if their faces were covered by dark patches of the night. Those are the Companions of the Fire, remaining in it timelessly, forever.” (Yunus: 25-27)

God gives an account of life in Paradise. He promises this life to those who believe and conduct themselves righteously in this world. This is the good news communicated to the believers:

“Those are the Ones Brought Near in Gardens of Delight. A large group of the earlier people but few of the later ones. On sumptuous woven couches, reclining on them face to face. There will circulate among them, ageless youths, carrying goblets and decanters and a cup from a flowing spring—it does not give them any headache nor does it leave them stupefied. And any fruit they specify and any bird-meat they desire. And dark-eyed maidens like hidden pearls. As recompense for what they did. They will hear no rattling in it nor any word of wrong. All that is said is, “Peace! Peace!” And the Companions of the Right: what of the Companions of the Right? Amid thornless lote-trees and fruit-laden acacias and wide-spreading shade and outpouring water and fruits in abundance never failing, unrestricted. And on elevated couches, We have brought maidens into being and made them purest virgins, devoted, passionate, of like age, for the Companions of the Right. A large group of the earlier people and a large group of the later ones.” (Al-Waqi’ah: 11-40)

While God gives to believers the good news of Paradise, a place of bliss and salvation, with its bounteous blessings, He also lets the disbelievers know that they will be sent to Hell. The Qur’an provides an account of Hell, a place of unbearable torment:

“And the Companions of the Left: what of the Companions of the Left? Amid searing blasts and scalding water and the murk of thick black smoke, providing no coolness and no pleasure. Before that they were living in luxury, persisting in immense wrongdoing and saying, “When we are dead and turned to dust and bones, shall we then be raised again or our forefathers, the earlier peoples?” Say: “The earlier and the later peoples will certainly all be gathered to the appointment of a specified Day. Then you, you misguided, you deniers will eat from the tree of Zaqqum, filling your stomachs with it and drink scalding water on top of it, slurping like thirst-crazed camels. This will be their hospitality on the Day of Judgement!”” (Al-Waqi’ah: 41-56)