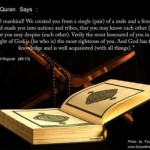 Neither wealth nor property or power can be taken into consideration when judging people.

It is widely known that some important persons in any given land are given extraordinary privileges and immunity. They are not treated like the ordinary people and laymen.

In the matter of fact, the point of Islam can be reflected clearly in the following verse:

…Indeed, the most noble of you in the sight of God is the most righteous of you… (Al-Hujurat 49:13)

Oh you who believe, be persistent in standing for justice as witnesses to God; even if it be against yourselves, parents, or other relatives. Whether one is rich or poor, God is more worthy than anyone. So don’t follow personal inclination, lest you be unjust. (An-Nisaa’ 4:135)

The Prophet Muhammad (peace be upon him) said:

“God, the Almighty, does not consider how your appearances or how rich you are, rather He looks to your hearts and your deeds”. (Ahmad)

It can be said after these proofs from the Qur’an and the Sunnah that there is no place in Islam for preference based upon wealth, power, or family.

These preferences will definitely hinder the way of achieving justice. Islam on the contrary, encourages achieving justice as soon as possible to the best of our ability. Neither wealth nor property or power can be taken into consideration when judging people. It rather depends upon how righteous one is. God says:

And whoever does righteous deeds, whether male or female, while a believer – those will enter Paradise and will not be wronged in the least b (An-Nisaa’ 4:124)

There is no discrimination in Islam based on sex, racism, or nationality. Everyone is equal in the eyes of God and everyone deserves their rights equally. Islamic History is a witness to that fact in many instances. For example: `Ali ibn Abi Talib (may God be pleased with him), the fourth Caliph (and the Prophet’s son in Law and cousin), commanding a Muslim state as big as China, misplaced his shield that he used in defending Islam and the Muslims years before when Muslims were persecuted in the days of the Prophet.

He found a Jewish man with his shield. And had the police confiscate it. The matter was taken to court and Ali’s only evidence that the shield was his, was his word. On the other hand the Jewish man described it and brought witnesses saying they knew it to be his and so forth. The judge ruled in favor of the Jewish man for the evidence provided. Ali accepted the court ruling to not be unjust as someone else who challenged the court wouldn’t be successful.

It should be noted that the reason we know this story is because that Jewish man later went to Ali and asked him why he didn’t kill him and take it back. Ali says the courts were made to uphold justice and he was lacking in evidence. The Jewish man handed him the shield and said ‘I bear witness that God is one and that Muhammad is His messenger’.

This statement converted him from a Jew to a Muslim. `Ali asked him: ‘What lead you to such a great decision?’ He replied: ‘We are told that Muhammad can’t be a Prophet because he wasn’t Jewish, but I know that it is only the Prophets who can leave a law which its adherents so sincerely apply it in Justice’. Ali then gave him back the shield and told him: ‘This is a gift for your having received guidance’.