It is customary for kings to promise reward and nearness to those whom they are pleased with. The  magicians said to Pharaoh,

and he answered that they would be rewarded and be among those near to him, saying: 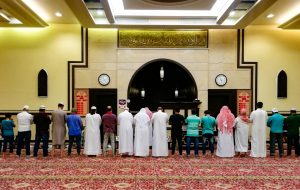 From The Benefits Of Prayer Is Nearness To Allah

The example of the first type is like a man who entered the abode of the king but was unable to gain entrance to him as there was a barrier standing between him and the king, hence he was unable to see him or gain access to this person.

The barrier is an embodiment of his desires and lusts as well as the smoke screen of his hopeful wishes in this life; his heart is sick and his self is wrapped up in what it desires wanting only its immediate share in this life.

It is for these reasons that all the while they pray they are in an unhappy state wherein they are not only unable to obtain any comfort, but are also empty of feelings of fear and hope in Allah, which makes prayer a suffering for them that only ceases when they finish praying, as only then are they able to return to that in which they find their comfort (i.e. worldly affairs and pleasures).

The example of the second type is like a man who entered the house of the king upon which the barrier screening him from the king is removed; thus he is able to find delight in looking at the king and being at his service and in his obedience. In return, the king lavishes upon him every form of grace and brings him near to himself.

For all these reasons, he is unable to bear leaving the house and wishes to remain standing before him to enjoy the sweetness of being close to him, the tranquility that he experiences from it, and being held in esteem by Allah while he basks in His good Words (i.e. Qur’an).

He also enjoys being in such a state of humbleness and humility before Him, for which he invokes Him more and more while he is being showered with His graces from every direction, not to mention the calmness that his soul experiences while his heart and limbs are fully attentive to his Lord. He is pleased and comfortable, worshiping Allah as if he sees Him, for He manifests Himself to him through His Words (i.e. Qur’an).

It should thus come as no surprise that the most distressing thing for him is to have to leave all that (i.e. conclude the Salah). And Allah is the Guide and the Helper.