As a Muslim at any stage in your spiritual development, you will almost certainly come across the most-cited hadith ever:

Indeed actions are [judged] by their intentions, and to every person [the reward for] which he intends.

Narrated through what Hadith scholars refer to as the “Golden Chain,” the hadith of intentions is one of the most authentic hadiths around.

What many of us miss, however, is the not-so-often-cited second half: 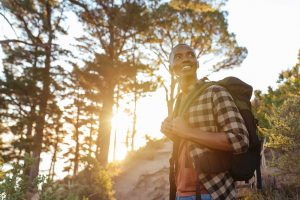 Mini-hijrahs are removing yourself from negative and detrimental non-Muslim influences and surrounding yourself with true submission (Islam) in as many aspects of life as possible.

Migration here is the translation of the Arabic term “hijrah,” often referred to the events when the Prophet Muhammad (Allah bless him and grant him peace) left Makkah to establish the first Muslim community in Yathrib, renamed Madinah or the “City of the Prophet.”

Some movements have taken this meaning to heart, suggesting that Muslims must physically leave non-Muslim majority societies and move to majority-Muslim countries.

However, most scholars believe that leaving your society is not a requirement as long as you are not in physical danger and are able to comfortably practice your faith.

But the meaning of hijrah goes much deeper than this; and there are several things that you can do that will both improve your faith and make you a better Muslim. These are what I like to call the “mini-hijrahs:” removing yourself from negative and detrimental non-Muslim influences and surrounding yourself with true submission (Islam) in as many aspects of life as possible.

Hijrah of the Eyes

The first and most obvious of these is to work towards the perfection of that which you see around you. In typical discussions, this means diverting your gaze from things that are forbidden. Not staring at the opposite sex, changing the channel when inappropriate content comes on the television, and avoiding reading material that drives you away from your faith are all parts of this.

There are also positive changes that you can make. Clean up your home, neighborhood, mosque, and work-space. Remember that hadith: “Cleanliness is half of faith.” (Muslim)

It doesn’t just mean having wudu’ but can also be achieved by not littering, cleaning up trash in your neighborhood, or having an organized home and office space.

Another positive hijrah for the eyes is to remember to take time to step away from your daily grind. Take your family to the park or re-connect with nature. Plant a garden, paint, and surround yourself with the beauty of God’s creation.

Hijrah of the Ears

We often pass-off the terrible things we hear every day. Swearing, explicit music, and just overall annoying sounds are things we have become accustomed to.

What we don’t realize, however, is that no matter how much we try, these sounds shape our mood. Do what you can to be aware of these negative sounds and try to avoid them as much as possible.

Take a step back from that friend who swears too much or talks about coworkers behind their backs. Turn down the music at work and avoid areas of town that are known for heavy street noise.

Surround yourself with positive sounds. Listening to the Quran and religious lessons throughout the day are a good start but be careful as even these typically beautiful and beneficial sounds can turn negative.

Anyone who has suffered through a crushingly-loud Quranic recitation or call to prayer can relate, and even the best of us can be turned away from God’s words when they are delivered through a nasty sound system or a lesson given by someone not properly trained.

Combine this hijrah with connecting to nature and listen to the birds or the calming sounds of the ocean. Sometimes, however, the most positive sounds you can hear are nothing, isolating yourself from the sensory overload of our daily lives to reflect in silence.

Hijrah of the Tongue

We’ve all let our tongues get away from us. Gossiping about a co-worker, spreading rumors about extended family members, or even just speaking your feelings when you should have kept your mouth shut. These are problems of the tongue and, as Muslims, we have a responsibility and duty to watch what we say to others as it affects both our well-being and that of others. Remember the Prophet’s words here:

He who believes in Allah and the Last Day must either speak good or remain silent. (Al-Bukhari and Muslim)

Think before you say something the next time you feel you just have to say something and hold in those feelings to speak out no matter how honest it really is. This doesn’t mean that you should lie, but silence is often better than brutal honesty.

These days, the hijrah of the tongue could be extended to that of our fingers as well, as negative social media posts are just as dangerous as strong words.

On the other side of the equation, utilize the positive meaning of the Hadith and speak “good” to others. A good word can really go a long way and positive statements, even those that are sometimes hard to make, can change lives.

Hijrah of the Mind

By combining these “mini-hijrahs,” you will find that it is not just your eyes, ears, and tongue that benefit, but also your mind and heart. Your mind is at the core of all these systems, and training it to be in better submission to its Lord is the first and most important step to being a better Muslim.

Likewise, by being a better member of your community, you can fulfill the deeper meaning of the hijrah as explained by the Prophet Muhammad without taking one step outside your home.

Brian Wright is a PhD candidate at the Institute of Islamic Studies, McGill University. His dissertation is on the development of Islamic criminal law in Egypt, India, and Ottoman Turkey during the 19th century. He has studied fiqh with a number of traditional scholars in Egypt and India.