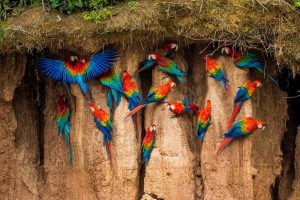 How Do Macaws Know Chemistry?

Some plants have poisonous seeds. This is an effective method of protection against enemies that try to eat them. Yet one parrot species living in America can feed on these poisonous seeds.

This is really surprising because while other creatures cannot approach these seeds, these birds that continually eat them are not affected by them at all. You are curious about how this happens, aren’t you?

How this parrot species called the macaw is not poisoned has attracted the attention of scientists too. Scientists observed macaws and witnessed a quite extraordinary pattern of behavior.

Having eaten these nutritious but poisonous seeds, macaws fly towards a rocky place. There they gnaw on and swallow some clay-containing rocks. This is not random behavior. Indeed, rocks that contain clay absorb the poison of the seeds. This is how the macaw can digest the seeds without being harmed by them.

How has this bird acquired the medical knowledge to diagnose the poisonous effect of the seeds? How does it know how to get rid of this poisonous effect? Could it possibly have had an education in pharmacy to know that a substance that neutralizes the effects of the poison is available in rocks that contain clay? Of course, not.

A human being could not tell whether a seed is poisonous or not by its appearance. He could not work out how to neutralize the effects of the poison. In order to be able to do that, he would have needed training or to have consulted people with such knowledge. This being the case, it cannot be claimed that a bird with no intellectual faculties might have discovered such a thing after long chemical analyses and study. It is not possible for macaws to acquire this knowledge, which can be learnt by human beings only after years of special training, by chance. All-Knowing Allah, Who creates everything perfectly, teaches macaws this knowledge.