The Church fought against science and reason, and latter’s work in religious texts. It became a stumbling block in the  way of progress and development and the conflict occurred between both those inside and outside the church; the climax of such conflict culminated in the French Revolution, which raised the slogan “Hang the last king with the intestines of last priest”. The spark of objection to the church’s authority was in the thought of Martin Luther (10 November 1483 – 18 February 1546 A.D), a German professor of theology, composer, priest, and a seminal figure in the Protestant Reformation.

Luther was ordained to priesthood in 1507. He came to reject several teachings and practices of the Roman Catholic Church. 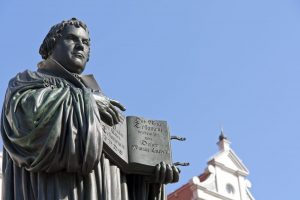 Church and Calls for Reform

Ecclesiastical Europe opposed all calls for reform and fought reformers and intellectuals who realized that some ecclesiastical teachings “were against reason and common sense”. Among them was Luther, who saw that the prohibition of monks’ and priests’ marriage was not found in Christianity in its earliest ages. He admitted the right of priests to marry and he already married a nun .

He argued that no one has the right to deprive anyone of admittance to the kingdom of God or possesses divine consent. Luther opposed to an excommunication or deprivation by the Pope to him and burned it in the center of Wintenberg in public and the civil authority had to implement the decision of deprivation of Luther’s legal and civil rights. His refusal to renounce all of his writings at the demand of Pope Leo X in 1520 and the Holy Roman Emperor Charles V at the Diet of Worms in 1521 resulted in his excommunication by the pope and condemnation as an outlaw by the Holy Roman Emperor.

In 1529, the emperor tried to enforce the denial of 1521, but Luther’s supporters protested. They were called the Protestants .Sometimes things went on peacefully and sometimes not. When Luther died, severe torment was inflicted upon his followers, then a reconciliation between the two groups was made.

He denied that Christ unites with body of those who eat the Lord’s Supper. He also denied the possibility that the bread turns to be the broken bones of Christ and wine to his blood, or their solutions to the body of Christ in Eater. According to him, the Lord’s Supper merely served as a reminder of Redemption. He, moreover, denied the Church’s right to atonement, which was the matchstick that ignited his revolution, and which the Church could not extinguish.

Luther considered that obtaining salvation or forgiveness of sins was a free gift or the grace of God through faith in Jesus Christ as the Savior, and, therefore, there should not be conditions by practicing certain acts for forgiveness.

In 1517, he published his famous ninety-five letter, most of which was related to the liberation of theology and authority. His refusal to retract his ninety-five points at the request of Pope Leon X in 1520 and the request of the Holy Roman Empire represented by Emperor Charles V led him to exile; his writings were considered an ecclesiastical heresy.

Islam Is a Previous Religious Reformative Call  Prior to Luther’s

Although Luther’s call got him nearer to secularism, it was the inevitable result that which every Christian practicing reason and putting false beliefs aside, may reach. Perhaps if Luther and his followers took a good look at the values ​​of the religion of Islam, the values ​​of the serpentine teachings that rectified Jesus’s distorted message after his death and added supreme legislation witnessed by some Christians, they could find what they yearned for.

Islam invites its followers to exercise reason and  teaches them that mind does not oppose sound scripture or religious text. A number of Muslim scholars, like  Ibn Taymiyah, authored in this field.

Islam condemned the people of the book (Jews and Christians) for heretical acts and rituals they invented in their religions and asked them to commit themselves to the real teachings of their respective prophets. The Qur’an says:

“Then We sent following their footsteps Our messengers and followed [them] with Jesus, the son of Mary, and gave him the Gospel. And We placed in the hearts of those who followed him compassion and mercy and monasticism, which they innovated; We did not prescribe it for them except [that they did so] seeking the approval of Allah. But they did not observe it with due observance. So We gave the ones who believed among them their reward, but many of them are defiantly disobedient.” (57:27).

The Islamic religion is characterized by being in harmony to common sense and sound nature. Prophet Muhammad (peace and blessings of Allah be upon him) discourages his followers from monasticism and even prohibits castration (i.e. cutting one’s sexual limbs) due to dedication or seclusion to worship. He showed that real asceticism does not mean torturing body or prohibiting what Allah made lawful. He says,

“There is no monasticism in Islam”.

Sad said: the Prophet- peace be upon him- discouraged Othman ibn (son of) Mazun  from Al-Tabattul (seclusion from people especially sexual lust or celibacy for worship). Had he legalized it to him, we would have done castration (i.e.  to cut our sexual limbs due to dedication to worship)”.

Al-Tabari said: “celibacy, which Othman bin Mazoon wanted meant prohibition of women and perfume. Allah (Glory be to him) says, ‘O you who have believed, do not prohibit the good things which Allah has made lawful to you and do not transgress. Indeed, Allah does not like transgressors”. (5:87)

There is no “clergy or Religious men in Islam in the priestly or ecclesiastical Christian sense”. Therefore, we reject the Lutherian concept of giving everyone the right to interpret the divine text even if not having the slightest logical reasoning.

In Islam, sacred text or scripture has its rules and origins that proceed from the proper understanding of linguistic rules and deep and comprehensive knowledge of texts. Islam rejects rigidity, dependency and imitation by those knowledgeable and can derive judgments from the texts and practice analogy which is called in Arabic “Ijtihad”. Muslim Scholars condemned those who claimed the closure of its door.

Islam does not require scripture-exegetes or scholars to practice certain rites or have a certain uniform, or to  lead a life that is completely different from other people’s lives or to have full seclusion from people. during times of worship. Prophet Muhammad was the most devoted worshiper of Allah. He lead a normal life tackling his society’s problems with the Qur’an (Islamic Scripture) and was involving with all people.

As to the relationship between the Creature and the Creator, no one has the right to admit one into the Kingdom of God or deprive him to be admitted to it or grant indulgences! by virtue of an order. Muslim scholars are only required to show sound divine teachings to people and have no authority over them. They laid strict measurements for Takfir (declaring others disbelievers and renegades), who should be declared disbeliever and who should punish them.

This Lutherian cry was a wake-up call for Europe which remained for long periods it in slumber and obliviousness while the sun of knowledge was rising there in the east in Mecca and people in the west were impeded to see such light by priests and monks through the distortion of divine messages and the denial of the message of Prophet Muhammad (May Allah’s peace and blessings be upon him).