How Christians depict Jesus (peace be upon him)

Christian artists down through the centuries have shown Jesus surrounded by fluffy clouds or angels. Around his head a golden halo of light shines, while little children and lambs are always at his feet.

On the cross, this artistic Jesus is shown suffering terrible agonies on behalf of others, asking always that his enemies be forgiven. The “gentle Jesus, meek and mild” of the Christian hymn books, the blue-eyed Jesus with curly flowing hair, is the Jesus that sits in the popular imagination.

Maybe it is because Islam has always discouraged depictions of human beings in art that Christianity has managed to win the publicity prize for its portrayal of Jesus (peace be upon him).

In addition to art, the Christian Church chose four of the many Gospels that were written to describe the life of Jesus. Saint Luke`s is perhaps the most beautiful, being a Gospel of prayer, of the poor, and of women. The way in which Luke crafts his words makes Jesus so appealing. 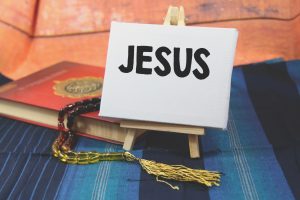 According to Islam, Jesus was a prophet of God. He belonged to a long line of prophets, calling people throughout history to the worship of One God.

Muhammad (God bless him and grant him peace)

Islam, on the other hand, has no artists to elevate Muhammad (peace be upon him) to the rank of a deity. It has no Gospel writers and no Paul to use their words to make Muhammad anything more than human. The Quran was revealed to a man who could neither read nor write. He simply recounted what was said as it was told to him.

Jesus (peace be upon him)

The Jesus which God tells about in the Quran is quite different from the Gospel Jesus, although there are some similarities. Especially at Christmas time, when the depictions of Prophet Jesus are at their most florid, we need to remind people who Jesus really was. In the Quran we read what means:

{He [Jesus] said: “I am indeed a servant of God. He has given me revelation and made me a prophet; He has made me blessed wheresoever I be; and He has enjoined on me prayer and charity as long as I live. He has made me kind to my mother, and not overbearing or miserable. So peace is on me the day I was born, the day that I die, and the day that I shall be raised up to life (again)!” Such was Jesus the son of Mary. It is a statement of truth, about which they (vainly) dispute. It is not befitting to (the majesty of) God that He should beget a son. Glory be to Him! When He determines a matter, He only says to it, “Be,” and it is.} (19:30-35)

In other words, according to Islam, Jesus was a prophet of God. He belonged to a long line of prophets, calling people throughout history to the worship of One God. These include such names as Abraham, Moses, David, and Solomon (peace be upon them all) and, like them, he is revered and honored by all Muslims. Whenever they mention the name of Jesus, Muslims will always say, “Peace be upon him.”

Like the accounts in the Gospels of Matthew and Luke, the Quran shows that Jesus` birth was miraculous:

{Behold! the angels said, “Oh Mary! God gives you glad tidings of a Word from Him. His name will be Christ Jesus, the son of Mary, held in honor in this world and the Hereafter, and in (the company of) those nearest to God. He shall speak to the people in childhood and in maturity. He shall be (in the company) of the righteous… And God will teach him the Book and Wisdom, the Law and the Gospel.”} (3:45-48)

Not only did Jesus have a miraculous birth, but the Quran also tells us that he was born of a virgin mother and that he spoke in the cradle, that he performed miracles, and that he did not die on the cross, nor was he raised back to life after three days.

God sent messengers down through the ages to bring men and women back to Him. It is part of our human nature, isn`t it, that we constantly forget, and need to be called back to the straight path?

Different messengers were sent with different gifts, as they needed to speak to their own people in a way that would attract them and help them to understand. It was the special gift of Prophet Jesus that he could perform miracles:

{I have come to you with a sign from your Lord: I make for you out of clay, as it were, the figure of a bird, and breathe into it and it becomes a bird by God`s leave. And I heal the blind, and the lepers, and I raise the dead by God`s leave.} (3:49)

Jesus (peace be upon him) is only a Messenger, not God

Being able to perform miracles didn`t make Jesus equal to God. Everything he did was by God`s leave, to teach the people of Israel about God Himself. Even these miracles, though, were not enough to convince them.

It is the belief of Islam regarding Jesus that we should never confuse the message with the messenger. His message was to speak about God and to show the power of God in this world and the next, but the message didn`t make him equal to God. His miracles were his way of conveying the message.

In fact, the Quran is quite clear about this:

{Christ, the son of Mary, was no more than a messenger; many were the messengers that passed away before him. His mother was a woman of truth. They had both to eat their (daily) food. See how God makes His signs clear to them; yet see in what ways they are deluded away from the truth!} (5:75)

Jesus and his mother both had to eat food. They were human beings, like you and I. Jesus was given the loftiest of tasks in being called to speak God`s message to the world, but he remained just that: a man who ate food.

Out of an exaggerated love for Jesus, many of his earliest followers, encouraged by the writings of Saint Paul, began to see Prophet Jesus as something more than human, a god.

They confused the beautiful message he brought with the One who sent it. They saw his gift of being able to calm the winds and the seas, or his gift of curing the sick, as indicating that he was more than just a man.

The Quran is quite clear about that, Jesus was a great prophet, but he was no more than that. He did not die on the cross, nor was he raised to life after three days, but he was a man.

One of the greatest men, yes. A man with very special gifts, yes. A man whom they revere as a great prophet, yes, but not a god. There is no God but Allah.

Dialogue between God and Jesus on the Day of Judgment

In summary of all this, the Quran tells us what God will say to Jesus on the Last Day, when He Almighty calls all people to Himself:

{And behold! God will say [on the Day of Judgment]: “Oh Jesus, the son of Mary! Did you say unto men, worship me and my mother as gods in derogation of God?” He will say: “Glory to Thee! Never could I say what I had no right (to say). Had I said such a thing, You would indeed have known it. You know what is in my heart, though I know not what is in Yours. For You know in full all that is hidden. Never did I say to them anything except what You commanded me to say: `Worship God, my Lord and your Lord.` And I was a witness over them while I lived among them. When You took me up, You were the Watcher over them, and You are a witness to all things.”} (5:116-17)

Idris Tawfiq was a British writer, public speaker and consultant. For many years, he was head of religious education in different schools in the United Kingdom. Before embracing Islam, he was a Roman Catholic priest. He passed away in peace in the UK in February 2016 after a period of illness. May Allah (SWT) have mercy on him, and accept his good deeds. Ameen.