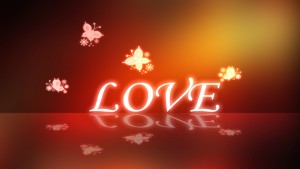 As a matter of fact, the Muslim faith is based on love of and for the sake of God. Such a rough, coarse person who does not feel love cannot be Muslim, simply because love is the mainstay of Islam. Love is a must for a person to be Muslim.

And [yet], among the people are those who take other than God as equals [to Him]. They love them as they [should] love God. But those who believe are stronger in love for God… (Al-Baqarah 2:165)

Say, [O Muhammad], “If your fathers, your sons, your brothers, your wives, your relatives, wealth which you have obtained, commerce wherein you fear decline, and dwellings with which you are pleased are more beloved to you than God and His Messenger and jihad in His cause, then wait until God executes His command. And God does not guide the defiantly disobedient people.” (At-Tawbah 9:24)

Prophet Muhammad said: “None of you will believe until I am more beloved to him than his children, his father and all people.” (Al-Bukhari)

Next to love for God and His Messenger, Muhammad, a believer must feel love for his Muslim brothers. Any such sort of love must be intended for the sake of God only, being free from any worldly blemish, so that a believer can taste the sweetness of the true faith.

Prophet Muhammad said: “None will taste the sweetness of faith until he loves a person only for the sake of God, until he would rather be thrown in the fire than to return to unbelief, and until God and His Messenger are more beloved to him than anything else.” (Al-Bukhari)

It is reported on the authority of Abu Hurairah that Prophet Muhammad said: “A person visited his brother in another town and God deputed an angel to wait for him on his way and when he came to him he said: Where do you intend to go? He said: I intend to go to my brother in this town. He said: Have you done any favor to him (the repayment of which you intend to get)? He said: No, except that I love him for the sake of God, Glorified and Exalted be He. Thereupon, he said: I am a messenger to you from God: (to inform you) that God loves you as you love him (for His sake).” (Muslim)

Anas ibn Malik reported that Prophet Muhammad said: “None of you will be a true believer until he wishes for his brother what he wishes for himself.” (Al-Bukhari & Muslim)

And [also for] those who were settled in al-Madinah and [adopted] the faith before them. They love those who emigrated to them and find not any want in their breasts of what the emigrants were given but give [them] preference over themselves, even though they are in privation. And whoever is protected from the stinginess of his soul – it is those who will be the successful. (Al-Hashr 9:59)

The Companions showed deep love for Prophet Muhammad. Anas reported that a man asked the Prophet about the Hour (i.e. Day of Judgment) saying, “When will the Hour be?” The Prophet said, “What have you prepared for it?” The man said, “Nothing, except that I love God and His Messenger.” The Prophet said, “You will be with those whom you love.” We had never been so glad as we were on hearing that saying of the Prophet (i.e., “You will be with those whom you love.”) Therefore, I love the Prophet, Abu Bakr and `Umar, and I hope that I will be with them because of my love for them though my deeds are not similar to theirs. (Al-Bukhari)

Prophet Muhammad used to share the feelings of love and affection with his Companions. Prophet Muhammad expressed his love for Abu Bakr Al-Siddiq more than once. Amr ibn Al-As reported: “The Messenger of God appointed me as commander of the army of Dhat Al-Salasil. So, I got to him, and said, ‘O Messenger of God, which of mankind is the most beloved to you?’ He replied, ‘Aishah.’ I said, ‘Who among men?’ He replied, ‘Her father.’” (Al-Bukhari & Muslim)

Not only did Prophet Muhammad love Abu Bakr Al-Siddiq only, but he also loved all of his companions. He expressed his love for some of his Companions. For example, Mu`adh ibn Jabal reported that Prophet Muhammad caught his hand and said: “O Mu`adh, by God, I love you!” Mu`adh replied: “I ransom you with my father and my mother! By God, I love you too!” (Al-Bukhari in Al-Adab Al-Mufrad)

Usamah ibn Zayd used to be called “the Beloved of the Messenger of God”. About Prophet Muhammad’s love for him, Osamah reported: “the Prophet used to take me and let me sit on his thigh and have Al-Hasan sit on the other thigh and he would hug us and say: ‘O God; have mercy on them for I have mercy on them.’” (Al-Bukhari)