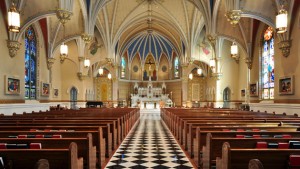 Islam pleads the cause of religion and defends all religions as well as their places of worship.

It is safe to say that a given religion can be judged correctly only by two things: its own teachings and the practice of the mainstream doctrine of this religion. A religion cannot be judged by the centrifugal practices or beliefs of some followers, be they liberal or extremist, hither or thither.

The Messenger of Allah once wrote to the bishop of Banu Al-Harith Ibn Ka’b and the bishops and priests of Najran, their followers and their monks that everything, small or great, pertaining to their churches, chapels and monasteries would remain in their possession, that Allah and His Messenger would guarantee that no bishop would be removed from his see, nor any monk from his monastery, nor any priest from his office and none of their rights or powers would be changed as long as they were sincere and good, and no cruelty would be shown to them. This was scribed by Al-Mughirah.

Umar ibn Al-Khattab, the Second Muslim Caliph, concluded a treaty with the people of Jerusalem which read:

This is the assurance of safety which the servant of God, Umar, the Commander of the Faithful, has granted to the people of Jerusalem. He has given them an assurance of safety for themselves, for their property, their churches, their crosses, the sick and the healthy of the city, and for all the rituals that belong to their religion. Their churches will not be inhabited [by Muslims] and will not be destroyed. Neither they, nor the land on which they stand, nor their crosses, nor their property will be damaged. They will not be forcibly converted. The people of Jerusalem must pay the poll tax like the people of [other] cities, and they must expel the Byzantines and the robbers. All this from the book they shall have as a pact of Allah, and as protection from his Messenger, from the Caliphs as well as from the Believers if they pay the jizyah. Witnesses of this are: Khalid bin Walid, `Amr bin al-`As, `Abd Al-Rahman bin `Awf and Mu`awiya bin Abi Sufyan. It was written with all present in the 15th year after Hegira.

Khalid bin Al-Walid, the renowned Muslim commander, concluded a similar treaty with the people of Damascus which read:

This is what Khalid bin Al-Walid shall grant to the people of Damascus: He shall grant them protection [and safety] for their lives, property [and possessions], their churches, and the walls of their cities. Nothing of their quarters will be destroyed nor shall anyone live in them. This they shall have as a pact of Allah, protection from his Messenger, from the Caliphs as well as from the Believers and nothing but good will remain for them if they pay the jizyah.

Habib bin Maslamah, a Companion of Prophet Muhammad and accomplished Muslim military commander, entered into a similar pact with the people of Dabil which read:

In the name of Allah, the beneficent, the merciful! This is a document from Habib bin Maslamah to the Christians, Magians and Jews of Dabil, present and absent. I assure you safety of your lives, properties, churches, places of worship and walls of your city. You are guaranteed protection and we are bound to fulfill our pact as long as you adhere to the jizyah and pay the kharaj. Allah is witness and He alone suffices as a witness.

In the Qur’an, we read verses telling us that Allah allowed the believers to fight against the unbelievers to prevent the demolition of the places of worship in general. Allah says:

Permission [to fight] has been given to those who are being fought, because they were wronged. And indeed, Allah is competent to give them victory.

[They are] those who have been evicted from their homes without right – only because they say, “Our Lord is Allah.” And were it not that Allah checks the people, some by means of others, there would have been demolished monasteries, churches, synagogues, and mosques in which the name of Allah is much mentioned. And Allah will surely support those who support Him. Indeed, Allah is Powerful and Exalted in Might.

[And they are] those who, if We give them authority in the land, establish prayer and give zakah and enjoin what is right and forbid what is wrong. And to Allah belongs the outcome of [all] matters. (Al-Hajj 22:38-41)

However, somebody may wonder how the empowerment of Muslims will prevent the demolition of the places of worship.

The answer is that Islam binds Muslims to not only refrain from attacking the places of worship but also to protect them against attacks by any other people. It is safe to say that Islam is keen on the other faiths, even if they are contradictory to its principles.

Islam is nothing but a faith and a body of beliefs. The cause of faith serves as a common ground for their coexistence with the other, whose faith or beliefs might be right or wrong from Muslims’ point of view.

So long as some faith or belief is cherished, there is a way for communication. Islam looks for those who are willing to believe in religions simply because they are supposed to seek the truth. We, Muslims, think that we have that truth. Consequently, dialogue with those people will bring Muslims either new converts or allies and friends from the other religions. Therefore, it may be hard liaise with those who are unwilling to believe in any religion for they are unlikely to accept religion and religious people.

Therefore, Islam pleads the cause of religion and defends all religions as well as their places of worship. Muslims wish that even if Islam is not professed, one religion is still followed. This is better for Muslims themselves.

Just as Muslims guarantee security, peace, justice and freedom for non-Muslims, they expect that they are given equal treatment by non-Muslims.

Muslims have shown sympathy for the followers of the other divine religions throughout history though such a feeling is not reciprocated by those followers, either Jews or Christians. Such sympathy is recorded in the Qur’an more than once.

We read the following verses in the Qur’an:

The Byzantines have been defeated

In the nearest land. But they, after their defeat, will overcome.

Within a few years. To Allah belongs the command before and after. And that day the believers will rejoice

In the victory of Allah. He gives victory to whom He wills, and He is the Exalted in Might, the Merciful.

In a word, Islam commands Muslims to give kind treatment and act justly towards non-Muslims so long as they do not wrong Muslims.

Allah does not forbid you from those who do not fight you because of religion and do not expel you from your homes – from being righteous toward them and acting justly toward them. Indeed, Allah loves those who act justly.

Allah only forbids you from those who fight you because of religion and expel you from your homes and aid in your expulsion – [forbids] that you make allies of them. And whoever makes allies of them, then it is those who are the wrongdoers. (Al-Mumtahanah 60:8-9)