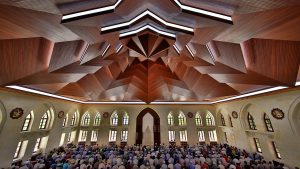 Charity is one of the means adopted to remove adversities and plagues.

What is the Islamic rule regarding giving Zakah to mosques and Islamic centers in Europe before it is due, due to the urgency caused by Coronavirus (COVID-19)?

It is permissible to pay Zakah one or more years in advance dependent on the need of the mosques and Islamic centers in Europe, provided that one owns the minimum stipulated for Zakah, even though the stipulated period of ownership is not met.

The permissibility of paying Zakah before its due term for a genuine reason is the opinion adopted by the majority of Muslim jurists and most Muslim scholars e.g. the Hanafi, the Shafi`i, the Hanbali scholars and others.

In support of their perception they quote a hasan (good) hadith reported by At-Tirmidhi and narrated by Ali Ibn Abu Talib (may Allah be pleased with him): “Al-Abbas asked Prophet Muhammad (peace be upon him) about paying his Zakah before its due term. The Prophet gave him concession.”

In addition, the mosques and Islamic centers in Europe are run by donations. Muslims’ charities represent a fundamental financial source for them. Upon closing mosques due to Coronavirus (COVID-19), these donations ceased, but the mosques and Islamic centers are in need of funds to pay employee’s salaries and cover the costs of running the places.

Some mosques may face complete shutdown due to their financial situations, The ECFR urges Muslims in general in Europe to perform their duty and fix their regular financial support to the Islamic centers by charity and donations other than their Zakah. This is their duty of this time.

Charity is one of the means adopted to remove adversities and plagues. It is obvious that mosques and Islamic centers in Europe constitute the most important factor of protecting religion for Muslims in Europe. In a previous Fatwa, the ECFR stated that it is permissible to spend Zakah for the benefit of Islamic centers.