The traditional date for the feast is January 6. However, since 1970, the celebration is held in some countries on the Sunday after January 1. Eastern Churches which are still following the Julian calendar observe the feast on , according to the internationally used Gregorian calendar, January 19.

According to Wikipedia, Epiphany is a Christian feast day that celebrates the revelation of God incarnate as Jesus Christ. In Western Christianity, the feast commemorates principally (but not solely) the visit of the Magi to the Christ Child, and thus Jesus’ physical manifestation to the Gentiles. It is sometimes called Three Kings’ Day, and in some traditions celebrated as Little Christmas. 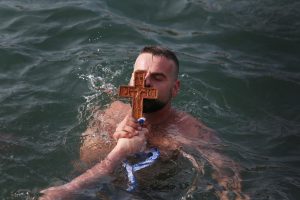 One may ask about the relationship of a diver’s going down in frozen water for search for the cross to the rite of baptism–an act which Jesus did not know?!

“At that time Jesus came from Nazareth in Galilee and was baptized by John in the Jordan. Just as Jesus was coming up out of the water, he saw heaven being torn open and the Spirit descending on him like a dove. And a voice came from heaven: “You are my Son, whom I love; with you I am well pleased.” (Mark 1: 9-11), see (As soon as Jesus was baptized, he went up out of the water. At that moment heaven was opened, and he saw the Spirit of God descending like a dove and alighting on him. Matthew 3: 16).

Could Epiphany Stand for Criticism?

We notice the failure of the concept of feasts on the Christian side, despite their agreement that feasts are rituals that occupy an important part of the Christian dogma.
There is no text in the Bible, urging the followers of Christ to celebrate this feast. Christians only claim that the Apostles have observed it and cite the following words to support it:
“Let you have a great feast, which is the Epiphany, because the Lord began to show his divinity in the baptism in Jordan by John.”
In fact, this text is not known about the Apostles, but it is a compelling ecclesiastical law imposed on the followers of Christ!
According to some contemporary Epiphany-rituals, “the baptized extracts the cross from the bottom of the water,” a ritual that Christ knows nothing about!

Contemplating on the motives for these rituals accompanying this feast, we find that they were based on the weak principle, upon which many church rituals were built, namely, purification from the inherited sin. This is testified by the evidence that many rituals associated with it were claimed by priests to erase sins.

A Christian Arab writer called Georges Milad says: “There is a special ritual prayer performed during Epiphany which is repeated only 3 times per year; it is the prayer of Al-Laqqan. In Christianity, it means ‘ablution’. Laqqan is a Greek word, meaning the “vessel in which water is placed to wash from it”. A priest, usually puts the forehead of men into the water as a symbol of washing from sin.

Perhaps this weak justification raises in our minds a question: Does a sinner need to be washed with water so that his/her sin may be forgiven?! Suppose that a stubborn disobedient did baptism, and nothing in his heart changed: would that remove his/her sin?!
In his book, the Right Answer To Those Who Changed The Religion Of Christ, Ibn Taymiyyah, a Muslim theologist, says:

“As for many of the laws that they are (i.e. Christians) following, their scholars know that most of them are not performed by Christ, peace be upon him. He did not legalize Epiphany. They were invented after the apostles. In the time of Constantine, many legislations, and doctrines were invented. They supported such newly rites with equivocal biblical texts, despite the existence if other definite texts contrary to them in the same book. Some of the so-called canonical texts were either narrated from the prophets, or the Apostles, while many of the heretic rites were not narrated from one of the Prophets, or the Apostles. Christians usually permit their clerics to change the laws of the religion and set a new law. Therefore, many of their religious laws were heretic and were not approved by a book or a prophet”.

Many rituals have been associated with such ritual, which is not related to Christ -peace be upon him: One may ask about the relationship of a diver’s going down in frozen water for search for the cross as a rite of baptism?!

There are kinds of food associated with it, and we see absurd justifications from the Christian clerics to justify linking them to Epiphany!

Goerges Milad says, “Eastern Christians eat taro in Epiphany, because it contains useful material, nutritious, and is similar to the of water of baptism through which a person purifies himself from sin”. Should all such absurdities be linked to Christ?!

The Christian-Christian Difference on Epiphany

No wonder that some churches have been disputed on such a festival. Gerges Milad says: “The Orthodox Church considers baptism by immersion” as one of the prominent differences with the Evangelical Church that did not consider baptism by immersion previously”.

He also says, “Early Christians were baptized only on Epiphany, to become Christians, but now they are baptized on any day!”.
We may ask: How is it permissible for the Church to deviate from the previously church jurisdiction of such ritual?!

If John the Baptist baptized Christ to receive the start of his preaching, and Christ did not make baptism his permanent tradition throughout his life, how could the Church legislate it all the time forever?! .

Noteworthy, this feast was influenced by pagan rituals including the belief in Trinity, and the son-ship of Christ to God! According to the Gospel of John, John the Baptist said:

There is no doubt that such a text contains a dramatic filling which is felt by those who have the slightest experience in text-criticism. According to it, John the Baptist says,

“I have seen and testified that this is the Son of God.”

Those words were neither said by Jesus, God nor the Holy Spirit? Was Jesus loaded with sins, to be baptized, by John who objected to his baptism at first (Matthew 3:14)?! Was Jesus sinful?! Or did he want to enter their new Christianity?!

Their fools answer: Christ has baptized us to wash away our sins! Would sins be purified with such a minor act, even if they were the most dangerous and criminal ones?! What guarantees Christ that the one who bathed for him to purify him from sins, may not indulge into the same sins after Jesus’s demise?!

If Christ bore our sins on our behalf, why should we repent?! Doesn’t this encourage us to commit more sins?!

The religion of Islam is the religion that corresponds to the sound nature; its followers will be free from such heresies. According to Islam, no one would bear another’s sin. God, almighty, says in the Qur’an:

“Say, “Is it other than Allah I should desire as a lord while He is the Lord of all things? And every soul earns not [blame] except against itself, and no bearer of burdens will bear the burden of another. Then to your Lord is your return, and He will inform you concerning that over which you used to differ.” ” (6: 164),

The Qur’an also leaves the door of repentance open to all people; no barrier between them and their Lord:

“And when My servants ask you, [O Muhammad], concerning Me – indeed I am near. I respond to the invocation of the supplicant when he calls upon Me. So let them respond to Me [by obedience] and believe in Me that they may be [rightly] guided. ” (2: 186)