Easter is a  main festival for Christians for long. According to  Wikipedia “Easter or  Resurrection Sunday, is a  festival  commemorating the resurrection of Jesus from the dead It is described in the New Testament as having occurred on the third day after his burial following his crucifixion by the Romans at Calvary c. 30 AD. It is the culmination of the Passion of Jesus, preceded by Lent (or Great Lent), a 40-day period of fasting, prayer, and penance”.

However, one may ask: is Easter acceptable according to Jesus’ teachings? Although widely-spread, one cannot find any proof in the New –Testament or a provision laying foundation for such a festival or its relative rites! Christians are even differed upon the day Jesus was raised from the dead! 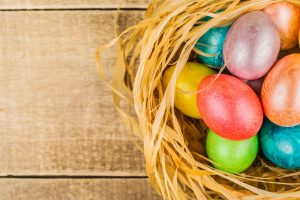 The truth remains that the Easter is a Nicaea-heresy which was not approved by Jesus. It celebrate heretic rites and the fantasy of the crucifixion of Jesus and  his humiliation at the hands of the Jews. According to Wikipedia, “The First Council of Nicaea (325 A.D) established two rules, according to the Jewish calendar and worldwide uniformity, which were the only rules for Easter explicitly laid down by the council. No details for the computation were specified; these were worked out in practice, a process that took centuries and generated a number of controversies. It has come to be the first Sunday after the ecclesiastical full moon that occurs on or soonest after 21 March. Even if calculated on the basis of the more accurate Gregorian calendar, the date of that full moon sometimes differs from that of the astronomical first full moon after the March equinox!”.[13]

Easter is linked to the Jewish Passover by much of its symbolism, as well as by its position in the calendar. Jewish Christians, the first to celebrate the resurrection of Jesus, timed the observance in relation to Passover.

Christians feared the Jewish domination over the Christian legacy, so Constantine II (316-373 A.D) said to bishops: “It is not appropriate that Christians follow the Jewish legacy in Easter as they were condemned for committing crimes.  We should separate from the heinous acts of the Jews!”.

Therefore, Christians tried to sway from following the Jewish dates for Easter. In most European languages the feast is called by the words for Passover in those languages; and in the older English versions of the Bible the term Easter was the term used to translate Passover!

The Synod gave the Church of Alexandria the right to designate Easter Day, due to its fame in astronomical sciences and its ability to calculate it precisely. The Bishop of Alexandria used to appoint the date of Easter, immediately after Epiphany, and inform other bishops of the “Passover Message”. Before the Synod, the Church of Alexandria had winked eye at the Jewish account, and took a special rule that made Easter fall after the first full moon after the Spring of March 21, which was adopted by the Council of Nicaea and followed by all the churches until now.

Many heretic rites permeated the Easter; some  Christians do not eat anything in solidarity with the sufferings of Christ, and some of them believe that Easter is to achieve the message of Christ on earth. Extraneous acts from other cultures, were also in the scene, such as decorating eggs and rabbits and eating lambs as a sign of the sacrifice of Christ of His flesh to mankind!

The events associated with the resurrection of Christ have been marked by contradictory events. This is further supported by the order of the contradictory events of Gospels accounts of the Crucifixion. Mark (43:14), Matthew (47:26)  and Luke (47:22) put the date of the arrest of Christ after the last Passover evening, on Thursday while John (28:18)  makes the Passover dinner on Wednesday evening. There are also contradictory accounts of the sign Judas, the traitor, gave to the Jews to define Jesus.

Therefore, we find the Qur’an uses words contrary to those propagated by Christianity as to the resurrection of Christ and his crucifixion. The Qur’an denied the death or crucifixion of Christ, and stated that Jesus is a way of being humiliated by the Jews. According to the Qur’anic account of the incident, Jesus’ likeness was put over another man who was crucified instead and Jesus was lifted up to the sky:

“And [for] their saying, “Indeed, we have killed the Messiah, Jesus, the son of Mary, the messenger of Allah.” And they did not kill him, nor did they crucify him; but [another] was made to resemble him to them. And indeed, those who differ over it are in doubt about it. They have no knowledge of it except the following of assumption. And they did not kill him, for certain. Rather, Allah raised him to Himself. And ever is Allah Exalted in Might and Wise. And there is none from the People of the Scripture but that he will surely believe in Jesus before his death. And on the Day of Resurrection he will be against them a witness” (4:157-159).

Hence, Christ was not put on the cross and was not crucified. With the advent of historical critical approaches, these contradictory evangelical accounts did not stand up to the scientific criteria. This indicates that Christianity has lost the credibility of perfect following of Jesus, peace be upon him according to his real law, as it came from his Lord. To one’s astonishment, “fake” Christianity waged wars worldwide bearing such “false symbolic teachings” to coerce people to adopt them!

You may also visit: