For many years, Christians used to celebrate Christmas as a main rite of the church. Many related rites were also added to the event. However, modern researches states that Christmas does stand the historical fact of the contradictions surrounding its legislation. There are many conflicting dates for the birth of Jesus.

According to Western Christianity and some Eastern churches it is on December 25;

January 7, according to Most Oriental Orthodox and Eastern Orthodox churches;

January 6, according to Some Anabaptists, such as the Amish and Armenian Apostolic Church;

And January 19  according to Armenian Patriarchate of Jerusalem.

Herbert W Armstrong starts his book, “The plain truth About Christmas” saying, “Where did the world get Christmas?… from the Bible, or paganism? Here are the astonishing facts which may shock you! Test yourself. How much do you know of the origin of the Christmas tree-of “Santa Claus”-of the mistletoe-of the holly wreath-of the custom of exchanging gifts?” 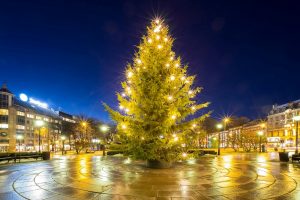 He states that Christmas means “Mass of Christ or Christ Mass”. It is a roman Catholic Mass taken from the heathen celebration of December 25th  as the birthday of the Sun-God SOL.

He states the plain truth that “Christmas is not Christ’s birthday. It does not celebrate his birth. The celebration is not of Christian, but of Heathen origin”.

So the date in which Jesus was born is equivocal. Therefore the author reaches the conclusion that: “The date is entirely unknown, as all authorities acknowledge”. Jesus, moreover, did not call his followers to celebrate his birth. Christmas is a heinous innovation or heresy by the followers of Jesus. According to Armstrong,”There is not one word in all the bible about celebrating Christmas”. Jesus refused any act of exaggeration regarding his position. From the starting point of his life, he declares that he is the slave worshiper of Allah,

We feel the pagan hands in the event of the celebration of Jesus’ birth. After Jesus’ demise, Jesus’ teachings were distorted and many heretic rites were approved by Nicaea Council 325 A.D.

Accordingly, many innovated heretic rites were related to such event like Christmas tree and Pope Santa Claus, a legendary figure originating in Western Christian culture who is said to bring gifts to the homes of well-behaved children on the night of Christmas Eve (24 December) and the early morning hours of Christmas Day (25 December). Christmas-tree, according to Wikipedia, is “Usually an evergreen conifer, such as a spruce, pine or fir, or an artificial tree of similar appearance, associated with the celebration of Christmas, originating in Northern Europe. The custom was developed in medieval Livonia (present-day Estonia and Latvia), and in early modern Germany where Protestant Germans brought decorated trees into their homes. It acquired popularity beyond the Lutheran areas of Germany and the Baltic countries during the second half of the 19th century, at first among the upper classes.An angel or star might be placed at the top of the tree to represent the Angel Gabriel or the Star of Bethlehem, respectively, from the Nativity”.

The Qur’an condemns Christians for such distortions and warns them against exaggeration in teachings,

“O People of the Scripture, do not commit excess in your religion or say about Allah except the truth. The Messiah, Jesus, the son of Mary, was but a messenger of Allah and His word which He directed to Mary and a soul [created at a command] from Him. So believe in Allah and His messengers. And do not say, “Three”; desist – it is better for you. Indeed, Allah is but one God. Exalted is He above having a son. To Him belongs whatever is in the heavens and whatever is on the earth. And sufficient is Allah as Disposer of affairs” (4:171)

It also warns them against following other people’s false beliefs,

“Say, “O People of the Scripture, do not exceed limits in your religion beyond the truth and do not follow the inclinations of a people who had gone astray before and misled many and have strayed from the soundness of the way.” (5:77) “

It, moreover, calls on them to act upon the real teachings of Jesus which order them to follow Prophet Muhammad and does consider Jesus as a god or the son of God,