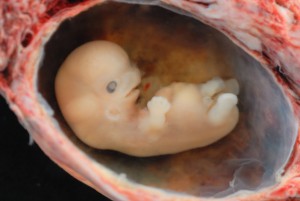 Knowledge of the successive stages of growth from the near-nothing of a spot of bodily fluid cannot but create a sense of awe at the responsibility one carries for the miracle of one’s life.

Dr. Albar is a Consultant to the King Fahad Medical Research Center, King Abdul Aziz University, Jeddah. In this excellent, fully illustrated study, written in plain English with only the minimum of technical words, he presents a summary of present knowledge about human embryonic development in the light of the Qur’an and Hadith.

The Qur’anic descriptions and those in the Hadith are remarkable for their accuracy in relation to what is known about the subject now. But, what was known then? Until 1688, among Muslim as well as European scientists, the Aristotelian account dominated, no one daring to question it.

The two theories in Aristotle’s time were: (a) the embryo is preformed as a miniature in either the male semen or the female secretion and then grows in the womb; and (b) the embryo is actually formed and created out of the menstrual blood. Aristotle favored the second view, adding that male semen caused the menstrual blood to coagulate, like milk curdling into cheese.

The relevant ahadith re-state what is in the Qur’an. Interestingly, while exegetes of Qur’an and Hadith did not fall into error in their account, many Muslim scientists and doctors, under the spell of Aristotle, repeated Aristotle’s (incorrect) view.

Thus, about 700 years after the Revelation, Ibn Hajar al-Asqalani commented: ‘Many of the anatomists claim that the semen of the male has no role in the creation of the baby. Its role, they claim, is limited to curdling the menstrual blood… The saying of the Prophet denies what they say. The semen of the male actually participates equally to that of the female in the formation of the embryo.’

The pre-formation theory lasted in Europe into the 18th century when it was believed that a full miniature existed either in the female ovum or in the male sperm, then simply got bigger in the womb. This theory was destroyed gradually and was no longer held in any form after 1900.

Gender of the Embryo

Von Baer (1829-37), called the ‘father of embryology’, identified the human ovum. Subdivision of the egg, i.e. growth of the embryo in successive stages, was properly demonstrated and understood in 1839 by Schwann and Schleiden. And in 1875, Hertwig described the fertilization of an egg by a sperm. Then in 1883, Von Benden showed that male and female cells contribute the same number of chromosomes to the embryo.

However, not until this century, have a number of discoveries established how and when the sex of the embryo is determined; how and when the hones and musculature, the organs of sight and hearing, the nervous system, and so on, develop. It is rather more than remarkable, therefore, that in Qur’an and Hadith we should find unmistakably accurate and detailed references to these matters.

The earliest of the successive stages of embryo development is the nutfah, in turn, distinguished as male and female nutfah (in modern terminology, gamete), the two being commingled to form the nutfat amshaj (zygote). The Qur’an clearly and explicitly states (75.3(t), 53.45-6, 59. 58-9) that the sex of the embryo is carried in the fluid ejaculated by the male (X or Y chromosome in the fertilizing sperm).

Also, in the Qur’an s emphasis that growth is from a lucre drop of fluid, we find a clear pointer to the fact that the spermatozoa make up a mere 0.5% of the ejaculated fluid, in which tiny quantity is carried an average 2 to 300 million individual sperms. The nutfat amshaj (zygote) develops into ‘alaqah (that which clings) which attaches itself to the uterine wall.

The stunning precision of the term ‘alaqah for the detail of how the zygote attaches, implants and is nourished in the womb, is striking in Dr. Albar’s account. (For even more on the detail, see Sikander Hussain ‘Al’Alaq: the mystery explored’, Ark Journal, London, 1986, pp. 31-6.) The ‘alaqah is transformed into mudghah (chewed lump), the somite(s) from which hones and muscles are subsequently differentiated. The mudghah stage includes also the pharyngeal arches (out of which face, ear and neck are formed) – the marked indentations give the embryo the look of a ‘chewed lump’.

The Qur’an’s allusion (22.5) to mukhlaqa and ghairu mukhlaqa, formed and non- formed development of the mudghah, is now readily understood as the critical period of organogenesis when the embryo is most susceptible to factors which can cause congenital malformations. The Qur’an says (2.259): kayfa nanshuzu-ha thumma naksu-ha tahma, ‘how We erect them (the bones) then enclothe them in flesh’.

Nanshuzu-ha, here inadequately rendered ‘We erect them’ is as informative as any modern textbook description, for example ‘With time a number of needle-like spicules are formed which progressively radiate from the primary ossification centers towards the periphery.’

The pre-formational aspects of embryo development are now understood as hereditary characteristics contributed by parental genes. In the Qur’an (81). 17-19), the nutfah (male and female gametes) is said to carry these predetermined characteristics. There are several ahadith confirming this reading. 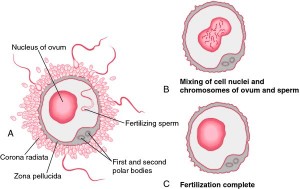 One, in the Sahih of Muslim, explicitly mentions 40-42 days after fertilization as the moment when the angel enters the womb and ‘gives the nutfah its shape and form, creates its hearing and visual apparatus, builds up the hones, the muscles and forms the skin.

He then asks, God, is it a boy or a girl, what is its livelihood and what will be its lifespan? God gives His answer and the angel writes all that will come. ‘The textbooks tell us that ‘In the sixth week of development the Primordial germ cells invade the genital ridges; if they fail to reach the ridges, the gonads do not develop..’ The site of formation of the gonads is indicated in Qur’an 86.5-9 as ‘between the backbone and the ribs’. This is exactly right.

Once formed the gonads differentiate into either male and female and make their progress in the body accordingly. Blood and nerve supply and lymph drainage remain connected, even in the adult, to the area ‘between the backbone and the ribs’. In this review, only a few of the great many correspondences between the Quranic text or ahadith and current knowledge about human embryo development have been mentioned.

What is the point of noting these? Almost all of these Qur’anic verses have as their general context a reminder of the resurrection. The re-creation of individual human life after death. We are confronted with the fact of life as a stunning miracle of the Mercy and Omnipotence of the Creator.

Knowledge of the successive stages of growth from the near-nothing of a spot of bodily fluid cannot but create a sense of awe at the responsibility one carries for the miracle of one’s life. And one carries it back to Him whose care initiated, ordained, proportioned and sustained our life – the contrasted human contribution being that drop of ‘lowly fluid’. Then, what – except perversity – could allow us to doubt that the Creator has concern for how we use our lives, or doubt that He can and will bring us again to life so that we may ourselves understand fully the worth of our intentions and actions?

Also, these verses, urging a meditation upon the fact of life rather than upon the fact of death, educate a positive temperament, a positive attitude. Religious responsibility can be awakened by reflecting upon the wonder of birth, as much as by reflecting upon the mystery of death. No textbook about human embryo development can inspire reflections of this kind. Of course, it is also of the utmost importance to know that the information in the Qur’an, given in words which are extraordinarily precise and yet remain generally intelligible, is accurate.

Most non-Muslims do not believe that the Qur’an is the Book of God verbatim, as Muslims believe. In trying to make sense of the phenomenon – so copiously illustrated by Dr. Albar from the field of human embryology – of how so much accurate knowledge is there in the Book, they may be led to question the assurance with which they hold to their non-belief.