Ihram (a state of ritual consecration during Hajj or ‘Umrah) is the first of the rites of Hajj, and it means the intention to start the rites. It is called ihram (which is derived from the Arabic word “haram“, i.e. forbidden or prohibited) because a pilgrim by assuming ihram prohibits himself from all the acts that have been permissible before being in this state, such as sexual intercourse, wearing perfume, clipping one’s fingernails, having one’s hair cut, or wearing certain kinds of clothes.

To illustrate, Shaykhul-Islam Ibn Taymiyah (may Allah have mercy on him) said:

“A man is not considered in a state of ihram once he intends, with his heart, to perform Hajj, for the intention is already in his heart since he has left his hometown (heading for Mecca). So, there must be specific words or deeds through which he becomes in a state of ihram.”[1] 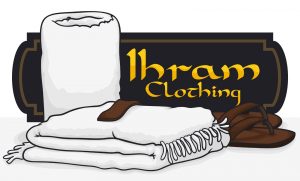 The clothing of ihram reminds one of death, the shroud of dead people, and the Day of Resurrection, and so on.

Recommended deeds to be observed before Ihram:

The Prophet (PBUH) used to do so before assuming ihram[2].

This is also because bathing is a better and more comprehensive way of cleaning and ridding oneself of any undesired smell. Moreover, having a bath upon assuming ihram is also required for a woman in a state of postnatal bleeding or menstruation, for the Prophet (PBUH) commanded Asma Bint ‘Umays, who was in a state of confinement, to take a bath before assuming ihram as related by Imam Muslim[3]. He (PBUH) also commanded ‘A’ishah (his wife) to do the same though she was in her menstrual period[4].

The purpose of this is to clean the body, remove undesired smells and remove the impurity of menstruation or confinement.

It is desirable to clean oneself perfectly well, removing the hair which is legally enjoined to be removed, such as trimming the moustache, shaving the hair of the armpits, and shaving the pubic hair.

One should do this before assuming ihram because it will not be allowed when being in a state of ihram. Yet, removing such kinds of hair is not one of the prerequisites for ihram. In other words, if one does not need to trim or shave any of them, one is not obliged to do so; it is permissible to do so if needed.

It is desirable for a pilgrim to perfume oneself using whatever is available, such as musk, incense, rose-water, aloes, or the like, for ‘A’ishah (may Allah be pleased with her) reported:

“I used to scent Allah’s Messenger (PBUH) whenever he wanted to assume ihram and (also) on finishing ihram before circumambulating the House of Allah (i.e. before tawaf).”[5]

It is desirable for male pilgrims before ihram to take off all tailored or sewn clothes and wear something unstitched; the Prophet (PBUH) used to take off his tailored or sewn clothes and wear something unstitched – after taking a bath – to assume ihram[6]. So, a pilgrim should wear a white, clean unstitched loincloth wrapped round the lower part of the body, wrapping another sheet of white, clean, unstitched cloth round the upper part.Yet, it is permissible to replace the white color with any other color provided it is traditionally befitting men.

The wisdom of the ihram clothing

The idea behind this is to withdraw oneself from luxury and to have the feeling of a submissive servant of Allah through wearing such humble clothing.Moreover, such clothing always reminds one of being in a state of ihram, and thus one keeps alert and avoids committing the acts prohibited during ihram. The clothing of ihram reminds one of death, the shroud of dead people, and the Day of Resurrection, and so on and so forth. In addition, taking off sewn clothes before intending to assume ihram is an act of the Sunnah, but it is obligatory after assuming ihram. So, if a pilgrim intends assuming ihram while still wearing his ordinary sewn clothes, his ihram is considered valid, but he is then obliged to take such clothes off and put on the clothes of ihram.

“Indeed, (the correctness and rewards of) deeds depend upon intentions…” (Al-Bukhari and Muslim)

As for praying before assuming ihram, the more valid opinion is that there is not a special kind of prayer to be offered before Ihram. However, if the time of ihram coincides with an obligatory prayer, then a pilgrim is to perform the obligatory prayer first then assume ihram. To illustrate, it was narrated that the Prophet (PBUH) assumed ihram immediately following performing (an obligatory) prayer[7]. Moreover, Anas reported that the Prophet (PBUH) performed the Dhuhr (Noon) Prayer then rode his mount beast[8], and when he came to the hill of Al-Bayda’ he raised his voice with talbiyah. The great Muslim scholar Ibnul-Qayyim (may Allah have mercy on him), said:

“It was never reported that the Prophet (PBUH) specified performing two rak’ahs (units of prayer)for assuming ihram; what was reported is that he performed the obligatory Dhuhr (Noon) Prayer before it.”[9]

It is important here to draw the attention of pilgrims to a very important matter; many pilgrims mistakenly believe that they have to assume ihram from the mosque in the site for ihram for them. As a result, many pilgrims, males and females, hurry to such mosques, overcrowding them, to start assuming ihram from there. They may also change their clothes there and wear the clothing of ihram while in fact all such issues are, by all means, baseless. Rather, Muslims are just required to assume ihram from the proper site for ihram for them, not specifically from the mosques therein.

They can assume ihram anywhere in such sites, and there is no specific place in a certain site from which a pilgrim is obliged to assume ihram. That is to say, pilgrims can assume ihram wherever is appropriate for them in their site for ihram, and this makes it easier for them and their fellows. This also spares pilgrims being exposed before one another or being jammed in certain places.

We would like to point out that those mosques in the sites for ihram were not there during the lifetime of the Prophet (PBUH), and that they were not built for the purpose of assuming ihram. However, they were built for the inhabitants of and around such places to perform prayer therein. This is very important to bear in mind, and may Allah grant us all success.

The three kinds of ihram:

A pilgrim is free to choose either the three kinds of ihram, namely tamattu’, ifrad, and qiran:

It means that a pilgrim assumes ihram for performing Hajj only, keeping in the state of ihram until he finishes performing the rites of Hajj.

It means that a pilgrim assumes ihram for performing both ‘Umrah and Hajj together, or to assume ihram for ‘Umrah then, before starting the tawaf (circumambulating the Ka’bah) for ‘Umrah, a pilgrim intends performing both ‘Umrah and Hajj either from the miqat or before the tawaf of ‘Umrah. In this case, a pilgrim is to perform both tawaf and sa ‘y (going between Al-Safa and Al-Marwah) for both.

It is important to point out that a pilgrim who intends tamattu’ or qiran is obliged to slaughter a sacrificial animal if he is not a resident of Mecca. We should also know that the best of the aforesaid three ways of ihram is tamattu’ for various legal proofs.

A pilgrim should raise his voice with talbiyah, saying it repeatedly.