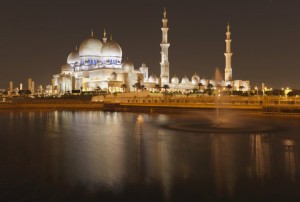 I was an extreme radical leftist as a youth. However, I also wrote poetry, and even though discouraged from it by my parents confusion and bitterness about religion, I believed in God.

I am an American journalist and author. In 1997, aged 49, after more than 30 years of research study, and life experience, I came into Islam. This decision reflected many issues in my life.

I grew up in an environment that would be extremely strange for most Americans. My father was Jewish; my mother was the daughter of a famous Protestant fundamental minister. My father was a religious student, or Yeshiva-bocher, as a youth. My mother was raised in an atmosphere of intensive Bible reading, and she knew the Old and New Testaments very well.

In Sarajevo, I did not find myself to be a tourist. I had direct encounters with Muslim believers and scholars

Both my parents’ faith was tested by the events of the 1930s. My mother abandoned Christianity in protest against the Nazi attacks on the Jews, who she had been raised to view as the ‘original People of God.’ Later, she converted to Judaism.

Both my parents spent a long period under the influence of the Communist Party, even as they continued to believe in the Jewish faith. That was the tragic paradox of their lives; disappointed by the failures of their born religions. However, while they wavered between liberal-radicalism and God, they were never extreme about Zionism.

Indeed, I always felt pain at the conflict in the Middle East, and always yearned for justice and friendship between Israelis and Arabs.

I was an extreme radical leftist as a youth. However, I also wrote poetry, and even though discouraged from it by my parents’ confusion and bitterness about religion, I believed in God. I tried to sort these matters out.

My first search for the truth led me to the Catholic Church. Although I did not convert, I was deeply impressed by Catholic mystical literature.

Very early on, I learned that behind the glorious works of the Spanish Catholic mystics there was the history of Islam in Spain, and that a beautiful Islamic inspiration had survived in that tradition. I eventually travelled to Spain repeatedly, searching out the traces of the long Islamic residence in the Iberian Peninsula. As a writer, I researched this phenomenon over many years. I studied the troubadour poets, who showed a deep Islamic influence.

Beginning in 1979, I studied Kabbalah, the tradition of Jewish mysticism. There too, I found an immense Islamic reflection, filtered through Judaism.

However, the decisive event in my journey to Islam came in 1990 when I began travelling to the Balkans as a journalist. I visited Sarajevo, and reported on the Bosnian war.

In Sarajevo, I discovered some amazing things. I found an outpost of Islam in Europe, in an environment where I did not feel I was a tourist, where I could have simple and direct encounters with Muslim believers and scholars. I found beautiful poetry and music that expressed the values of Islamic grace and love.

I had discovered “the garden of the old Imam,” to quote a line from a famous Bosnian song- the remnant of the great period of Ottoman rule in the Balkans, and its tremendous contributions to Islamic civilization.

I read passages from the Qur’an and visited Islamic monuments on my trips to the Balkans. I kept coming back to the garden, and finally I entered it.

Since accepting Islam, I have proceeded carefully in informing my friends, neighbors, co-workers, and others. I do not want to provoke conflict or controversy, and I do not want this experience to be seen as something superficial or faddish. It isn’t about me, it’s about Allah. I want to proceed in a way that will do the most for the welfare of the Ummah and for better relations between all believers in la ilaha illallah.

So far, I have had no problems aside from occasional crude remarks. If anything, people in my newsroom seem pleased to have someone around who can report with greater accuracy about issues. Others are surprised but respectful; they seem to understand this is not about politics or publicity-seeking, but reflects a long personal quest.

I think also, to be totally honest, that non-Muslims see me as someone deeply affected by my experience in the Balkans, so that this choice makes some sense in that context.

However, I am quick to make clear that I am not a Muslim for political or humanitarian reasons, but because the message of Prophet Muhammad (Pbuh) is the clearest evidence of the wishes of Allah.

As I stated at the beginning, I see much of what is positive in Judaism and Christianity today as a reflection of Islamic influence.

I mentioned Spanish Catholicism. There is a reason Spanish Catholics feel their faith more intensely than other Catholics, and that is because of the Islamic legacy in their culture. The Crusades and the Inquisition did not extinguish this light, however dimmed it may seem to some.

I truly believe that without the tolerance of the Arab rulers in Spain, and, particularly, the generous protection extended by the Ottoman caliphs, Judaism might have disappeared from the world. Certainly, Jewish religious historians today admit that Judaism today would be very different without the positive input derived from living in a Muslim environment.

The aspect of Islam that most impressed me is the emphasis on inner peace afforded by submission to the will of Allah. I saw this in the politeness, the courtesy, the simplicity and sincerity (ikhlas) of Bosnian Muslims who had been through the worst torments, yet never gave up their basic serenity.

That serenity has made my life easier. Whenever I feel troubled and tested by daily life, or anxious and fearful about the future, or frustrated in my literary ambitions, my mind goes automatically, now, to remembrance of the Muslims I know in Bosnia, to the calm and unity of congregational prayers, and, above all, to the clean and soothing words of the  Qur’an.

My only problem has been in overcoming my fears about conflict with Jews and Christians. I seek conciliation-though not concessions to secularism.

Before I became a Muslim, I was impressed by the values of Muslims I knew in America and the moral strength of the Balkan Muslims in the face of their ordeal. Today, I am, I must say, somewhat sad to find that the Ummah is so profoundly divided, and to see how Muslims quarrel with each other. I am also concerned by the failure of Muslims to do more for the victims of Orthodox Christian imperialism in the Balkans. Islam has brought great peace and beauty to my life. As I have told others, the remainder of my years will be dedicated to service of Allah. I have personally pledged to do all I can to help rebuild the mosque of Bosnia and Kosovo.