Allah supported Islam with Hamzah’s conversion. He was strong in defending the Prophet of Allah (peace be upon him) and the helpless amongst his Companions. When Abu Jahl saw him among the Muslims, he realized that war was inevitably coming. 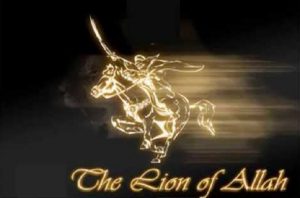 Since his conversion, Hamzah devoted all his life and power to Allah and His religion.

Therefore he began to support the Quraish to ruin the Prophet and his Companions. He wanted to prepare for a civil war to relieve his heart of anger and bitter feelings.

Hamzah was unable, of course, to prevent all the harm alone, but his conversion was a shield that protected the Muslims, and was the first source of attraction to many tribes to embrace Islam. The second source was `Umar Ibn Al-Khattab’s conversion, after which people entered Allah’s religion in crowds.

Since his conversion, Hamzah devoted all his life and power to Allah and His religion till the Prophet peace be upon him) honored him with the noble title, “The Lion of Allah and of His Messenger”.

The first military raid launched by the Muslims against their enemies was under the command of Hamzah. The first banner that the Prophet handed to any Muslim was to Hamzah. In the battle of Badr, when the two conflicting parties met, the Lion of Allah and of His Messenger was there performing great wonders.

But the Quraish would not accept the defeat easily. They started to prepare the army and to pull together all powers to avenge their honor and their dead. They insisted to continue the war.

In the Battle of Uhud, all the Quraish went to war together with their allies from the Arabs, under the leadership of Abu Sufyan once again.

The Quraishi leaders had targeted two persons in the new battle, namely, the Prophet and Hamzah (May Allah be pleased with him). If one had heard them talking and plotting before the war, one would realize that Hamzah was their second main target after the Prophet.

Before they went to war, they had already chosen the person in charge of assassinating Hamzah: an Abyssinian slave with extra ordinary skill in spear throwing. They planned for him to kill Hamzah, his only role being to hit him with a deadly spear. They warned him not to be busy with any other preoccupation other than Hamzah, regardless of the situation on the battlefield. They promised him the excellent reward of his freedom.

The slave, whose name was Wahshiy, was owned by Jubair ibn Mut`am. Jubair’s uncle had been killed in the Battle of Badr, so Jubair said to Wahshiy, “Go out with the army, and if you kill Hamzah you will be free.” Afterwards, the Quraish sent Wahshiy to Hind Bint `Utbah, Abu Sufyan’s wife, to give him more encouragement to kill Hamzah, because she had lost her father, uncle, brother, and son and it was said that Hamzah had been behind their deaths.

This was the reason why Hind was the most enthusiastic one of all the Quraish to escalate the war.

All she wanted was Hamzah’s head, whatever the cost might be. She spent days before the battle pouring all her rage into Wahshiy’s heart and making the plans for him. She promised him if he killed Hamzah she would give him her most precious trinkets. With her hateful fingers she held her precious pearl earrings and a number of golden necklaces around her neck and gazed at him saying, “All these are yours if you kill Hamzah.”

Wahshiy’s mouth watered for the offer, and his soul yearned for the battle after which he would win his freedom and cease to be a slave, in addition to all the jewelry decorating the neck of the leading woman of the Quraish, the wife of its leader, and the daughter of its master. It was clear then that the whole war and the whole conspiracy were decisively seeking Hamzah.

Thus the Lion of Allah and of His Messenger died as a great martyr. His death was as unusual as his life, because it was not enough for his enemies to kill him. They sacrificed all the men and money of the Quraish to a battle only seeking the Prophet and his uncle Hamzah.

The battle ended and the polytheists mounted their camels and led their horses back to Makkah. The Prophet (peace be upon him) and his Companions examined the battlefield to see the martyrs. There, in the heart of the valley, the Prophet was examining the faces of his Companions who had offered their souls to their Lord and had given their lives as a precious sacrifice to Him.

The Prophet suddenly stood up and gazed in an upset manner at what he saw. He ground his teeth and dosed his eyes. He never imagined that the Arabic moral code could be that savage so as to cut and disfigure a dead body in the dreadful way that had happened to his uncle, the Lion of Allah, Hamzah Ibn `Abdul Muttalib. The Prophet opened his shining eyes and looked at the dead body of his uncle saying, “I will never have a worse loss in my life than yours. I have never been more outraged than I am now”.

Then he turned to his Companions saying, “It is only for the sake of Safiyah (Hamzah’s sister) that she should be grieved and that it should be taken as a practice after me. Otherwise, I would have ordered him to be left without burying so that he may be in the stomachs of beasts and in the craws of birds. If Allah destines me to win over the Quraish, I will cut thirty of them into pieces.”

Therefore, the Companions shouted, “By Allah, if one day we conquer them, we will cut them in a way that no Arab has done before!” Allah honored Hamzah by making his death a great lesson for the Muslims to learn justice and mercy, even in situations when penalties and retaliation were justified.

No sooner had the Prophet finished his threatening words, then a revelation came down to him while he was still standing in his place with the following verse:

Call mankind to the Way of your Lord with wisdom and sound advice, and reason with them in a well-mannered way. Indeed your Lord is well aware of those who have gone astray from His way, and He is well aware of those who are guided. And if you retaliate, let your retaliation be to the extent that you were afflicted, but if you are patient, it will certainly be best for those who are patient; and be patient, yet your patience is only with the help of God, and do not sorrow for them, not distress yourself at what they devise. Indeed GOD is with those who are pious, and those who are doers of good. (An-Nahl 16:125-127)

The revelation of these verses in this situation was the best honor for Hamzah. As stated before, the Prophet loved him dearly because he was not only an uncle, but also his brother by fosterage, his playmate in childhood, and the best friend in all his life.