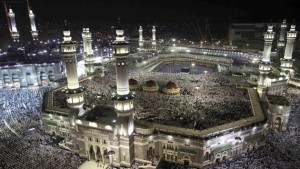 Hajj is obligated by Allah upon every Muslim, male and female, who is physically and financially capable

The word Hajj, linguistically, means heading to a place for the sake of visiting; in Islamic terminology, it implies heading to Makkah to observe the rituals of pilgrimage.

Hajj is obligated by Allah upon every Muslim, male and female, who is physically and financially capable. It is obligatory only once during the lifetime of a Muslim. Allah Almighty says (what means):

…And [due] to Allah from people is a pilgrimage to the House – for whoever is able to find thereto a way… (Aal `Imran 3:97)

Prophet Muhammad (peace be upon him) said: “Islam is built upon five (pillars): the testimony that none has the right to be worshipped except Allah and Muhammad is the Messenger of Allah, the observance of the prayer, payment of Zakat, Hajj to the House (i.e. Ka’bah,) and fasting in Ramadan.” (Al-Bukhari & Muslim)

The Prophet (peace be upon him) also said: “Hajj is mandated once, so whoever makes it more (than that), then it is supererogatory.” (Abu Dawoud and Ahmad)

Hajj was prescribed in the sixth year after Hijrah (migration) upon the revelation of the following verse in which Allah says (what means):

Hajj is not a new institution introduced by Islam, rather it is as old as the Ka’bah itself. Allah Almighty says (what means):

Indeed, the first House [of worship] established for mankind was that at Bakkah [i.e., Makkah] – blessed and a guidance to the worlds. (Aal `Imran 3:96)

The whole origin of Hajj is rooted in the acts of devotion of Prophet Ibraheem (peace be upon him). This demonstrates that Muhammad (peace be upon him) did not innovate this institution, all he did was to clear it of all the evil practices that had crept into it. After a few centuries of the death of Ibraheem and his son Isma’el, may Allah exalt their mention, people abandoned their teachings and gradually went astray, like all other people around them. Hundreds of idols were installed in the Ka’bah, which was built by Ibraheem and Isma’el, may Allah exalt their mention, as a center for the worship of the One True God. Ironically enough, idols were made after the image of Ibraheem and Isma’el too, whose whole lives had been spent eradicating idol-worship. The descendants of Ibraheem (peace be upon him), who had himself repudiated all idols, began to worship idols. The Ka’bah was turned into a type of temple for idol-worship and superstition. This predicament lasted for about two thousand years, until the advent of Prophet Muhammad (peace be upon him).

Hajj is rightly said to be the perfection of faith, since it combines in itself all the distinctive qualities of other obligatory acts of prayer, patience, privation of amenities of life, devotion, Zakat (alms), slaughtering sacrifice and supplication. In fact, the physical pilgrimage is a prelude to the spiritual pilgrimage to Allah when man would bid goodbye to everything of the world and present himself before Him as His humble servant saying: ‘Here I am before You, my Lord, as a slave.’

There are three forms of Hajj:

1. Hajj At-Tamattu’: This is where a pilgrim assumes Ihram for ‘Umrah only, during the months of Hajj, which means that when he reaches Makkah, he makes Tawaaf and Sa’i for ‘Umrah. Then he shaves or clips his hair. On the eighth day of Thul-Hijjah, the pilgrim assumes Ihram again for Hajj only and carries out all of its requirements.

2. Hajj Al-Ifrad: This is where a pilgrim assumes Ihram for Hajj only. When he reaches Makkah, he performs Tawaf for his arrival and Sa’i for Hajj. He does not shave or clip his hair as he does not disengage from Ihram. Instead, he remains in Ihram until after he stones the Jamratul–’Aqabah on `Eid day. It is permissible for him to postpone his Sa’i for Hajj until after his Tawaf for Hajj (i.e. Tawaf Al-Ifadhah).

3. Hajj Al-Qiran: This is where a pilgrim assumes Ihram for both ‘Umrah and Hajj, or he assumes Ihram first for ‘Umrah, then makes his intention for Hajj before his Tawaf for Hajj. The obligations on one performing Ifrad are the same as those on one performing Qiran, except that the latter must slaughter whereas the former is not obligated to do so.

The best of the three forms is Tamattu’. It is the form that the Prophet (peace be upon him) encouraged his followers to perform.

Hajj is undertaken in company with all the other pilgrims. The months of Hajj are: Shawwal, Thul-Qi’dah and Thul-Hijjah (the last three months of the Hijri calendar). One can perform ‘Umrah for Hajj At-Tamattu’ at any time within these three months (i.e. he may perform ‘Umrah during the Hajj season, and then subsequently make Hajj the same year at the fixed time, beginning on the eighth day of Thul-Hijjah).

The Makkan territory is sacred. The pilgrim enters this territory in a state of Ihram (a state in which one is forbidden to do certain things that are otherwise permissible).

Ihram, for men, entails wearing a special garment. A male pilgrim is not allowed to wear form-fitting clothes or to cover his head or hands with gloves, or his feet with socks or shoes. This is done in order to foster a sense of humility and a feeling of brotherhood among Muslims.

The male pilgrim’s garment consists of two sheets of white woolen or cotton cloth, of which one is wrapped around the waist and reaches below the knees and above the ankles, while the other is wrapped around the upper part of the body. The head and the right shoulder are left uncovered during Tawaf. This attire is for males, whereas females have to cover all of their body except the face and hands.

Before donning this dress, the pilgrim is recommended to take a bath (Ghusl). A man in Ihram is consecrated. He cannot hunt, pick plants, shed blood, or have sexual intercourse or partake in whatever leads to it.

The Excellence of Hajj

The Prophet (peace be upon him) also said: “Hajj is the Jihad for the old, the weak and women.” (An-Nasaa’i)

3. It wipes away past sins:

Abu Hurayrah (may Allah be pleased with him) reported that the Prophet (peace be upon him) said: “He who performs Hajj seeking Allah’s pleasure and avoids all lewdness and sins (therein) will return after Hajj free from all sins, just as he was on the day his mother gave birth to him.” (Al-Bukhari and Muslim)

4. Pilgrims are the Guests of Allah:

The Prophet (peace be upon him) said: “Pilgrims and those performing `Umrah are Allah’s guests; their prayers are answered and their supplications for forgiveness are granted.” (An-Nasaa’i and Ibn Majah)

5. The Reward of Hajj is Paradise:

The Prophet (peace be upon him) said: “All sins committed in between the performance of one `Umrah and the next are expiated and erased, and the reward of Hajj ‘Mabroor’ is nothing save Paradise.” (Al-Bukhari and Muslim)
_______________________
Source: islamweb.net.